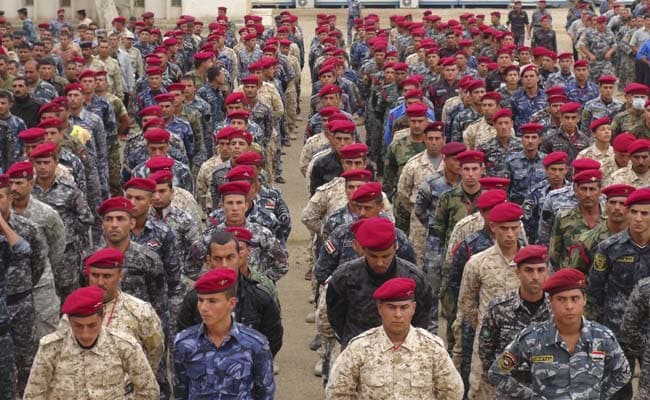 Sunni tribesmen take part in a military training, as they prepare to fight against militants of the Islamic State, on the outskirt of Ramadi, west of Baghdad. (Reuters)

Baghdad: Islamic State militants have killed at least 25 members of a Sunni Muslim tribe in a village on the eastern edge of the provincial capital Ramadi, local officials said on Saturday, in apparent revenge for tribal opposition to the radical Islamists.

They said the bodies of the men from the Albu Fahd tribe were discovered by the Iraqi army when it launched a counter-offensive on Saturday against Islamic State near Ramadi, the capital of Anbar province.

"While they were combing the territories they are liberating, security forces found 25 corpses in the Shujariya area," Hathal Al-Fahdawi, a member of the Anbar Provincial Council, told Reuters.

Albu Fahd tribal leader Sheikh Rafie al-Fahdawi said at least 25 bodies had been found and said he expected the total to be significantly higher. He said the bodies were found scattered around with no signs of weapons next to them, suggesting they were not killed during fighting.

Last month Islamic State fighters killed hundreds of members of the Albu Nimr tribe in Anbar in an attempt to break local resistance to their advances in the Sunni Muslim province they have largely controlled for nearly a year.

Islamic State, which has seized control of large parts of Syria and Iraq, continues to gain territory in Anbar despite three months of US-led air strikes launched against the group.

On Friday it launched coordinated attacks in central and outlying areas of Ramadi in an attempt to take full control over a city which is already mostly in its hands.

The road from Ramadi to the military airbase of Habbaniya, about 25 km (15 miles) to the east, remained under Islamic State control on Saturday, Hathal Fahdawi said, preventing the army from reinforcing security forces in the city.

He said tribal fighters backed by army tanks were trying to secure the road to allow forces through from Habbaniya.

Islamic State's lightning offensive through northern Iraq in June plunged the country into its gravest security crisis since the US-led overthrow of Saddam Hussein in 2003, and raised concerns that its radical ideology will spread.

Promoted
Listen to the latest songs, only on JioSaavn.com
In northern Iraq, a farmer near the city of Mosul discovered around 60 bodies believed to be those of prisoners killed by Islamic State fighters when they overran the city's Badush prison on June 10, witnesses said on Saturday.

The bodies were found after heavy rain disturbed their mass grave. The United Nations said up to 670 prisoners from Badush were killed by Islamic state five months ago.
© Thomson Reuters 2014