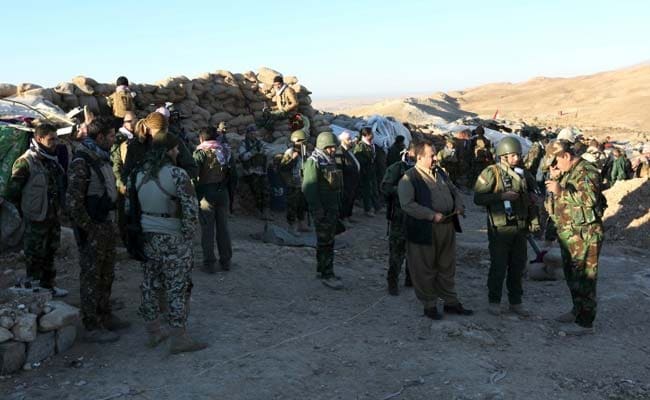 Members of the Kurdish peshmerga forces gather in the town of Sinjar, November 12, 2015. (Reuters)

Washington, United States: The Islamic State group is committing genocide against Iraq's Yazidi community, the US Holocaust Memorial Museum said in a report Thursday based on harrowing interviews detailing rape, torture and murder.

A Kurdish-speaking minority mostly based around Sinjar mountain in northern Iraq, the Yazidis are neither Arabs nor Muslims and have a unique faith the militants consider to be heretical and polytheistic.

When in the summer of 2014 the terrorists made an unexpected push into parts of northern Iraq, many Yazidis were massacred and abducted.

Tens of thousands scrambled up Mount Sinjar in a panic and remained stranded there for days with no food or water.

"The crime of genocide is ongoing against the Yazidi population as women and children who have been kidnapped in large numbers remain enslaved by their captors," said Cameron Hudson, director of the museum's Simon-Skjodt Center for the Prevention of Genocide, which authored the report.

The center conducted a two-week trip to the northern Iraqi province of Nineveh in September to learn about atrocities that took place there, assess the current situation and understand future risks to minorities and other civilians in the region.

"We didn't just see the intent" to commit genocide, "we actually saw acts representing that intent," said Naomi Kikoler, deputy director of the center, who traveled to Iraq to do the interviews.

"We also saw statements from the Islamic State and their various propaganda outlets explaining and affirming their actions being taken in accordance with their extremist ideology."

The center wrote in its report that it "heard harrowing accounts of displacement, forced conversion, rape, torture, kidnapping and murder."

It added: "We sat with Yazidi men as they wrote name after name of their missing family members wives and daughters, who they believed were kidnapped, and sons and brothers, whose circumstances they did not know."

The report also referenced "heartbreaking accounts" from survivors who had to leave older or sick family members behind as they fled ISIS terrorists.

"This was especially true for the poor and those without access to cars or trucks, who had to flee on foot," the report said.

ISIS boasted last year that it had reinstated slavery, offering its fighters captured Yazidi women and girls as loot.

For many, that fate is still a reality.

"Men, women, and children who were kidnapped and are still being held by ISIS continue to be the victims of atrocity crimes," the report said. "Their release must be a priority."

Publication of the report comes as Iraqi Kurdish forces backed by US-led air strikes blocked a key Islamic State group supply line with Syria as they fought to retake the town of Sinjar from the terrorists.

The report was welcomed by Yazidi human rights activist Dakhil Shammo, who hailed two pieces of good news "the report and the liberation operation."

Last month, the Yazidis urged the International Criminal Court in The Hague to investigate the militants for allegations of genocide and sexual slavery.

In March, the UN human rights office said ISIS appeared to be committing genocide against the Yazidis, publishing a report describing killings, torture, rape, sexual slavery and the use of child soldiers by the extremists.

The Washington-based museum, inaugurated in 1993, also documented ethnic cleansing, war crimes and crimes against humanity against other ethnic and religious minorities living in northern Iraq.