"What we have seen today is a culmination of a quiet revolution that has been taking place in Ireland for the past 10 or 20 years," said Prime Minister Leo Varadkar. 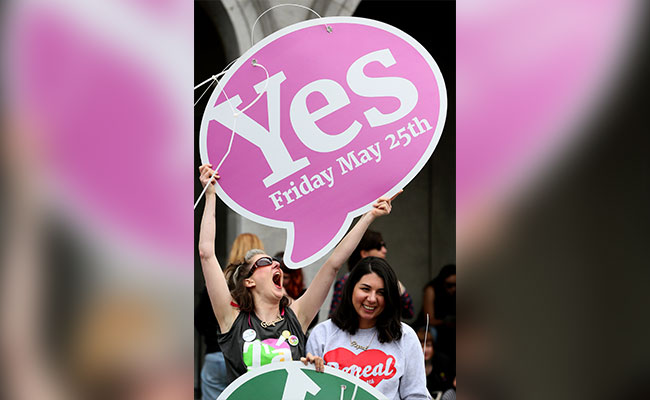 In Dublin constituencies, the vote was running 75 percent for repeal. (AFP)

DUBLIN, Ireland: The Irish are poised to end, perhaps in a landslide, one of the most restrictive abortion bans in the developed world, according to incoming tallies of the votes cast in Friday's referendum.

The early count of votes on Saturday mirrored the results of two respected exit polls that suggested a decisive win for the campaign to repeal the Eighth Amendment to the Irish constitution. The 1983 amendment enshrined an "equal right to life" for mothers and "the unborn" and outlawed almost all abortions - even in cases of rape, incest, fatal fetal abnormality or risk to maternal health.

"What we have seen today is a culmination of a quiet revolution that has been taking place in Ireland for the past 10 or 20 years," said Prime Minister Leo Varadkar.

After the vote to repeal the Eighth Amendment has been certified, Ireland's political leadership has promised that Parliament will quickly pass a new law guaranteeing unrestricted abortion up to 12 weeks, and beyond that in cases of fatal fetal abnormalities or serious risks to a mother's health. That would bring Ireland's access to abortion more in line with the other 27 members of the European Union.

Varadkar said the new legislation would be enacted by the end of the year. "The people knew what we had in mind, and I don't think it would be right to depart from that at all," he said. 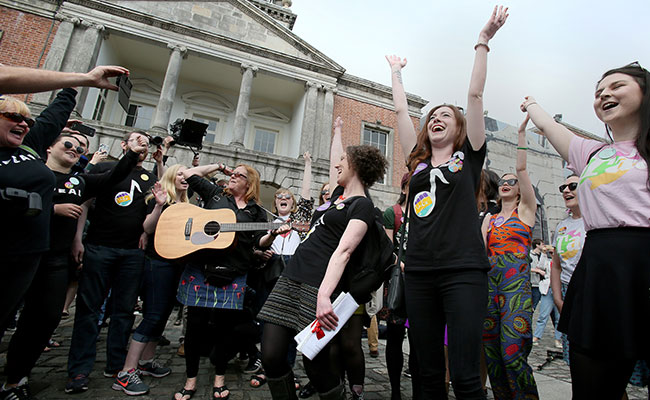 Simon Harris, Ireland's Minister of Health, said a bill would be written this summer. "The people of Ireland have told us to get on with it," he said.

Harris said he was as surprised as everyone with the high turnout and outsized vote for repeal. "If you can find anybody today who said they were expecting this majority, I'd love to meet them. I don't think anybody was expecting this margin," he said.

Campaigners for repeal, watching the votes being counted in auditoriums and civil halls around Ireland, were tweeting that most boxes contained a majority for repeal.

In Dublin constituencies, the vote was running 75 percent for repeal. In Roscommon-Galway, the only constituency to reject same-sex marriage in the 2015 referendum, the "Yes" vote for overturning the abortion ban was at 57 percent, with two-thirds of the ballots counted.

The exit polls released by Irish broadcaster RTE and another from the Irish Times saw two-thirds of the vote going to repeal. Women outpolled men in the exits, but men still supported the yes side. So did farmers and rural counties. Support was largest among the young and urban. About 3.3 million Irish had registered to vote, and many appeared to be returning from abroad to cast ballots (AFP)

Irish Times columnist Finan O'Toole tweeted: "For all the attempts to divide us into tribes, the exit poll shows that every part of Ireland has voted in broadly the same way, which is to trust women and make them fully equal citizens."

The tally of the vote began at 9 a.m. Saturday, with a final count expected later in the day. About 3.3 million Irish had registered to vote, and many appeared to be returning from abroad to cast ballots.

Reports from polling stations around the country indicated turnout of 70 percent in some areas, the highest ever for a referendum vote. By comparison, turnout was just over 60 percent when Ireland voted to legalize same-sex marriage in 2015.

In Ireland, seeking or providing an abortion has been punishable by up to 14 years in prison. Since 2013, there has been an exception for when a mother's life is at risk.

"I feel very emotional. I'm especially grateful to the women of Ireland who came forward to provide their personal testimony about the hard times that they endured, the stress and the trauma that they experienced because of the eighth amendment," said Ireland's Minister for Children and youth affairs Katherine Zappone. 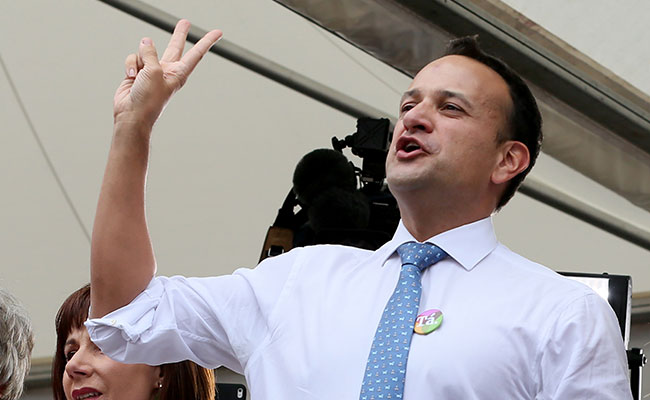 Prime Minister Leo Varadkar said the new legislation would be enacted by the end of the year. (AFP)

John McGuirk, a leader of one of the prominent anti-abortion groups, called Save the 8th, called the vote was "a tragedy of historic proportions."

On Facebook, McGuirk's organization posted, "Abortion was wrong yesterday. It remains wrong today. " The group said it would fight the legislation.

Although Ireland bans abortion, it does not restrict travel for it. Researchers estimate that about 3,500 women make the trip to Britain each year and that another 2,000 end their pregnancies with pills they buy over the internet and smuggle into Ireland.

One of the central figures in Ireland's abortion debate has been Amanda Mellet. In 2011, Mellet was forced to choose between carrying a dying fetus to term in Ireland or to travel abroad for an abortion.

In June 2016, the United Nations Human Rights Committee found Ireland subjected Mellet to cruel, inhuman or degrading treatment, while also violating her right to privacy. The U.N. decision required Ireland, for the first time, to compensate a woman for the expenses and emotional distress tied to an abortion. It also called on Ireland to amend its laws criminalizing abortion, including its constitution, if necessary. 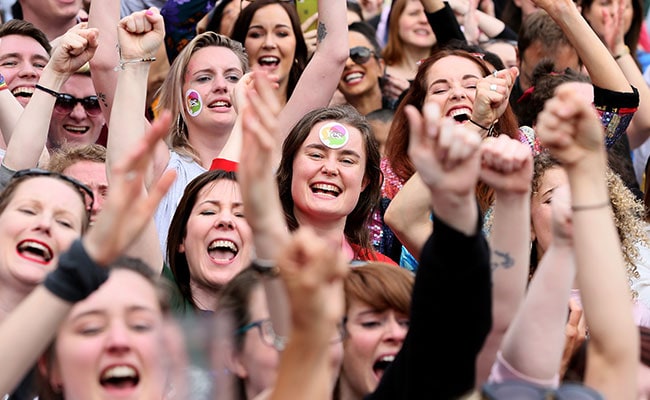 'Yes' campaigners react while they waited for the official result of the Irish abortion referendum, at Dublin Castle (AFP)

Many saw the vote as a blunt rebuttal to the Catholic hierarchy, which has been beset by scandals over sexual abuse, financial crimes and its historic treatment of women.

Social change in Ireland has been seismic. In the 1990s, homosexual activity was criminal here. Divorce was forbidden. It was still difficult to buy a condom, the sale of which was outlawed until 1985.

Within a generation, all of that has changed, bringing the majority-Catholic nation of about 4.8 million people into line with the rest of Western Europe. The pace of change over the past three years alone has been striking, with Ireland stepping out in 2015 as the first country to legalize same-sex marriage by referendum.

"I've gone from being a criminal to being able to marry a man," said David Norris, a scholar of James Joyce credited with leading the campaign to overturn Ireland's anti-gay statute in 1993. He was elected to the Senate in 1987 - the first openly gay person elected to public office in Ireland - a full decade, he said, after he became the first person to put abortion on an election manifesto, in 1977.

"It wasn't a particularly popular idea, but I thought it was time to do it," Norris said in an interview. "It's an issue of human rights."

Beginning with the issue of contraception in the 1960s, public opinion began to veer from the teachings of the Catholic Church - as the Pope reaffirmed the prohibition on birth control against the recommendations of a commission comprising theologians, physicians and others.

"That affected people's real sexual and reproductive lives," Norris said. "The majority of people just ignored the teachings of the Church." But "the nail in the coffin," he added, was "the succession of really appalling scandals about mistreatment of women and molestation of children." 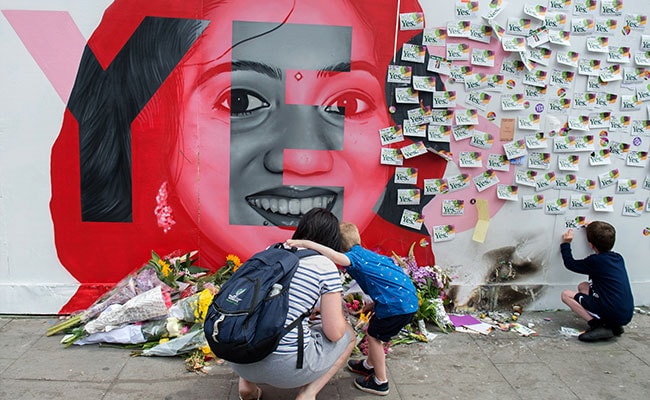 A mural of Savita Halappanavar put up on the day of the Abortion Referendum in Dublin. (AFP)

Outrage over clerical abuse compounded doubts about religious authority, said Gladys Ganiel, a political sociologist at Queen's University Belfast. People did not cease identifying as Catholic, or believing in God, but became more comfortable following their own conscience over Church dictates.

The European Values Study found in 2008 that 92 percent of Irish people believed in God, representing a drop of only 5 percent since 1981. Still, the share of the population identifying as Catholic has diminished markedly in a short period of time, from 84 percent in 2011 to 78 percent in 2016, according to census data. The figure was 92 percent in 1991.

Ganiel said economic changes, combined with eventual loosening of laws on the sale of contraceptives, undermined an alliance between priests and mothers that was central in maintaining Irish conservatism.

"This begins in the 1960s, but somebody stood on the accelerator in the 1990s when things started coming out about Church abuse," Ganiel said. "The 1990s are also when Ireland becomes economically prosperous for the first time. It's a perfect storm. Religious authority declines in Ireland from a much higher peak than the rest of the world. It's quite dramatic, but with hindsight, it's not as unexpected."

Daithí Ó Corráin, a historian at Dublin City University, said familiar patterns have transformed the role of religion in Irish society - including urbanization, greater levels of education and generational differences.

Promoted
Listen to the latest songs, only on JioSaavn.com
"Ireland is just a very different country now than it was in 1983," he said, referring to the year in which the Eighth Amendment was endorsed by 67 percent of voters. "I suppose after contraception, after divorce, after marriage equality, this - legal abortion - really is the last bastion."

(Except for the headline, this story has not been edited by NDTV staff and is published from a syndicated feed.)
Comments
Irelandireland abortion vote