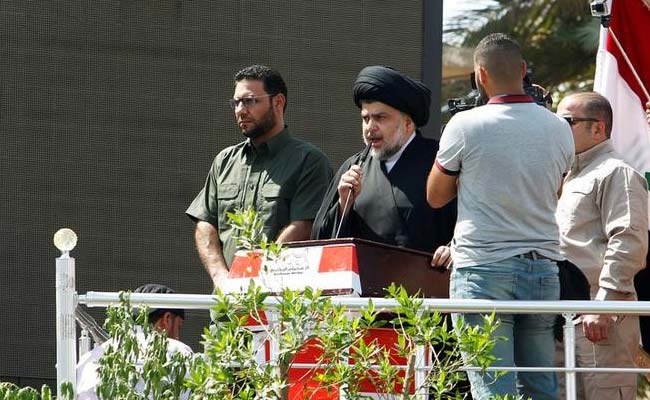 Moqtada al-Sadr speaks during a protest against corruption at Tahrir Square in Baghdad.

BAGHDAD: Powerful Shi'ite Muslim cleric Moqtada al-Sadr instructed his followers on Sunday to target US troops deploying to Iraq as part of the military campaign against ISIS.

US Defense Secretary Ash Carter said on Monday the Pentagon would dispatch 560 additional troops to help Iraqi forces retake the northern city of Mosul in an offensive planned for later this year.

Sadr, who rose to prominence when his Mahdi Army battled US troops after the 2003 invasion, posted the comments on his official website after a follower asked for his response to the announcement.

"They are a target for us," Sadr said, without offering details.

The Mahdi Army was disbanded in 2008, replaced by the Peace Brigades, which helped push back ISIS from near Baghdad in 2014 under a government-run umbrella, and maintains a presence in the capital and several other cities.

The new troop deployment, which is expected to happen within weeks, would raise the number of US forces in Iraq to around 4,650, far below the peak of about 170,000 reached during the nearly nine-year occupation.

Other Shi'ite militias, particularly those backed by Iran, have made similar pledges to attack US soldiers in the past year, but the only casualties since American forces returned to Iraq to battle ISIS two years ago have come at the hands of the Sunni militant group.
© Thomson Reuters 2016