The temporary structure, known as the Victory Bridge, is the only crossing over the Tigris River in the city itself. 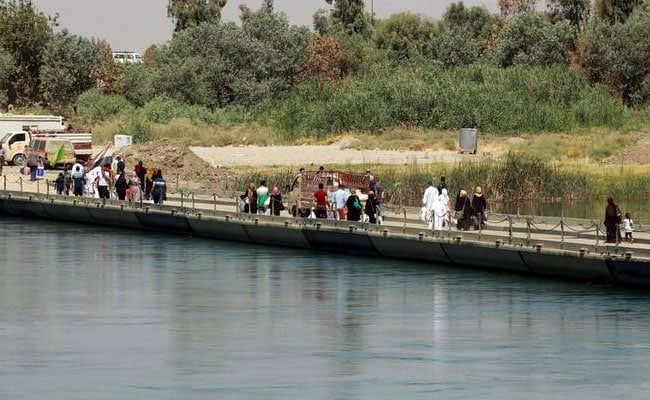 With Mosul back in government hands, hundreds of people stream over to stay in the east Mosul. (Reuters)

Mosul: On a pontoon bridge connecting East and West Mosul, residents of a city shattered by the battle to expel ISIS cross back and forth trying to rebuild their lives from the rubble.

The temporary structure, known as the Victory Bridge, is the only crossing over the Tigris River in the city itself. Other bridges, including the landmark Iron Bridge, were wrecked in nine months of urban warfare which saw Iraqi government forces fight the terrorists street-by-street and house-by-house.

With Mosul back in government hands, hundreds of people stream over each day to check homes in the devastated west side, salvage belongings or find a place to stay in the east.

All have tales of hardship and suffering under three years of ISIS rule and, despite their relief that is over, now they are worried about their present predicament and the future.

Many people from West Mosul, where whole neighbourhoods were flattened in air and artillery strikes by a US-led coalition, are struggling to pay rent in temporary accommodation. Often they have no work and are running out of funds.

Safwan al-Habar, 48, who has a house in al-Zinjili district, had spent a morning seeking help for a particularly alarming problem -- ISIS had booby-trapped his house.

"Two bombs attached to each other with wire. If you put your leg on it, it will explode," he said.

"Do you know anyone who can remove it?" he asked. "Every day I go to the military and every day they say come back tomorrow. I am in a mess. I'm paying rent but I want to go home."

Civilians must walk across the bridge, which was erected for military purposes. Taxis halt on the east side about half a km (mile) away for soldiers to check papers.

People must then walk past the ruins of the Nineveh Hotel - once a luxury hang-out for Iraqi generals - and down a slope to the pontoon where more soldiers lounge in the sun. Taxis also wait on a patch of open ground on the other side.

In the cavalcade coming the other way, people toted televisions, cookers, bags of clothes and other items retrieved from wrecked homes. One man had reclaimed some notebooks and an English-Arabic dictionary which he carried in a plastic bag.

Another man, Mirsur Dannon Hassan, 53, said his house had been destroyed in an air strike.

"I don't have a salary. I need help to rebuild it," he said.

He was living in rented accommodation with his wife, five daughters and son in the east but the landlord had just increased the rent from $100 per month to $200.

They said life was miserable under ISIS, also known as Dash, which seized Mosul in July 2014 and declared it the capital of a self-styled caliphate spanning parts of Iraq and Syria.

"It was living hell," said 31-year-old Mohamad Zuhair. "Daesh denied you everything. You did not have the right to have a phone or wear jeans. I had to have a long beard."

There were beatings and executions for transgressions. As the fighting worsened, gunmen opened fire on people trying to escape.

Zuhair's children were traumatised by the experience.

"They stayed in a basement for two weeks and are still afraid," he said. "If the government helps me, I'll go back. But if not, I'll stay here."

WHO CAN HELP ME?

Yasser, 27, had been a taxi-driver in the Old City, a terrorist stronghold. Three months ago they burnt his car.

"That was the only way I could make money. I don't know who to turn to for help. Is there someone who can help me?" he said.

He now rents a house for his family for $80 but had almost run out of his $500 savings.

Faras Abdulrazaq Mohamed, 33, was heading back from East Mosul to Badoush with his wife and four young daughters. His house was still standing but they had come over two days earlier because his wife Inassalem needed to see the doctor.

"There is no doctor, no pharmacy, over there," he said.

Firas Elias Abbas, 31, walked over the bridge with his wife Asma, 25. Their home in Nablus district was damaged and they had moved to a refugee camp but wanted to return so Asma could resume classes at Mosul University.

She was studying chemistry when ISIS seized the city.

"There was no university, nothing. I lost three years," she said.

She was going to the university, which is in East Mosul, to find out what the situation was. The campus is a bombed-out ruin -- ISIS had used it as a headquarters, making it a target for coalition air strikes.

Promoted
Listen to the latest songs, only on JioSaavn.com
(Reporting by Angus MacSwan; Editing by Edmund Blair)