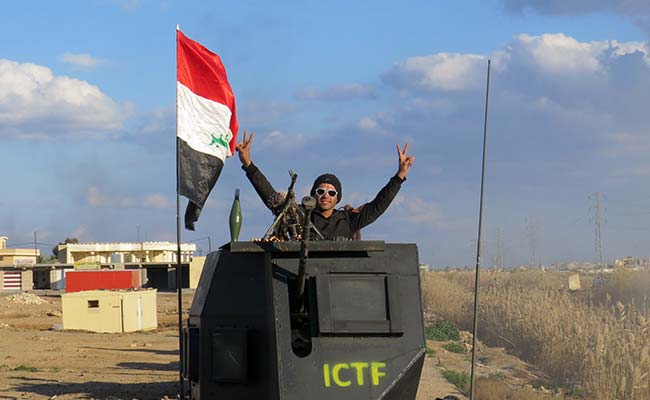 A member of Iraqi pro-governement forces flashes the sign of victory after Iraqi troops retook eastern outskirts of Ramadi from ISIS. (AFP photo)

Baghdad, Iraq: Iraq said today that its forces have completely retaken areas surrounding Ramadi from the ISIS and reopened the road linking the city to Baghdad.

Iraq announced in late December the recapture of Ramadi, the capital of Anbar province west of Baghdad, but daily fighting with ISIS continued for over a month on the city's eastern outskirts.

Iraqi forces "were able to liberate areas east of Ramadi," including Sichariya, Juwaiba and Husaiba, the joint operations command said in a statement.

With the latest advances, Ramadi and all its surrounding areas have been retaken from ISIS, the statement said.

Iraqi forces "were also able to open the Ramadi-Baghdad road passing through Khaldiyah," it said, referring to a government-held area along the route.

ISIS overran large areas of Iraq in June 2014, but security forces and allied tribesmen held out against the jihadists in parts of Ramadi as other areas of the country fell.

ISIS overran Ramadi in May 2015 in an assault spearheaded by a wave of car and truck bombs, a major blow to Iraqi forces, which had been regaining ground from the jihadists in other provinces.

But the capture of Ramadi was the last major advance by jihadists in Iraq, and Baghdad's forces slowly tightened the noose around it in the following months before moving into the city itself.

ISIS still holds Fallujah, east of Ramadi, and Mosul, Iraq's second city that is located in the north.

Iraq is deploying thousands of soldiers to an area southeast of Mosul for operations aimed at cutting supply lines linking it with areas farther south, which will set the stage for direct efforts to retake the city.
Comments
Iraq CrisisRamadi