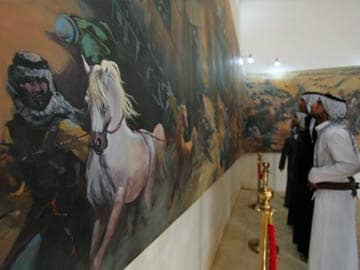 Iraqis visit the Najaf Heritage and 1920 Revolution Museum in the Khan al-Shilan building on February 27, 2014 in the holy city of Najaf, central Iraq.

Najaf: Iraq opened a museum in the Shiite pilgrimage city of Najaf on Thursday commemorating a 1920 uprising against British occupation in a building that once housed captured soldiers.

The opening of the Najaf Heritage and 1920 Revolution Museum in the Khan al-Shilan building was attended by Tourism and Antiquities Minister Liwaa Smaisim, as well as tribal leaders and politicians.

"This is the first museum dedicated to the heritage and history of Najaf, and represents a symbol of the rejection of slavery and foreign occupation," Smaisim told AFP.

The opening ceremony included a reenactment of an attack by tribesmen on British soldiers following their capture of the country from Turkish troops in World War I.

A statue of one of the resistance fighters stands in the museum's courtyard.

Najaf is home to the shrine of Imam Ali, one of the most revered figures in Shiite Islam, and is visited by hundreds of thousands of pilgrims each year.

But Smaisim said he hoped it would also see cultural, recreational and archaeological tourism.

The museum houses Ottoman-era documents and artefacts on its ground floor, while the upper level is dedicated to the 1920 uprising.

Some rooms still preserve graffiti on their walls scribbled by captured British troops.

Khan al-Shilan was originally intended to be a rest house for pilgrims visiting Najaf.

But it was used as an Ottoman military headquarters before the defeat of the empire in World War I and then an administrative centre when Iraq became a British mandate.

During the 1920 uprising, Khan al-Shilan briefly reverted to local control and was used as a prison to hold captured British troops.

The revolt was ultimately defeated, and Iraq did not gain independence until 1932. It was reoccupied by Britain during World War II.

British forces returned to Iraq during the 1991 Gulf war, and took part in the US-led invasion of 2003.

Promoted
Listen to the latest songs, only on JioSaavn.com
Khan al-Shilan has served a variety of functions over the years. Najaf's first electrical generator was installed in the building in 1933 to supply power to the Imam Ali shrine and surrounding Old City.

It was later used as a flour mill and then an ice factory. But it ultimately fell into disrepair, until the museum project gave it a new lease of life.