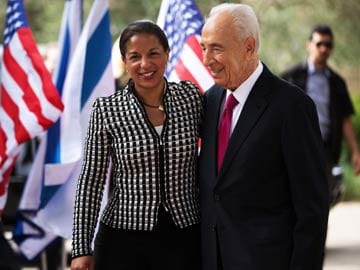 Benjamin Netanyahu, who is in Japan this week for talks with Prime Minister Shinzo Abe and Foreign Minister Fumio Kishida, said Iran "would share whatever technology it acquired with North Korea," the Mainichi Shimbun reported in a front-page piece.

Despite international isolation and extensive sanctions, North Korea appears to be readying to carry out a fourth nuclear test, observers have said, and regularly makes noises about the weaponisation of its technology.

While being at the leading edge of Pyongyang's isolation, resource-poor Japan has maintained friendly relations with oil-rich Iran through its years of ostracism, keeping up a diplomatic dialogue that many developed countries cut off decades ago.

Late Tuesday, during a meeting with Kishida, Netanyahu called both Iran and North Korea "rogue" states.

"We see a danger and a challenge posed by a rogue state arming itself with nuclear weapons. In your case it's North Korea," he said.

"We are faced with such a rogue state in the form of Iran and its quest to develop nuclear weapons," he said.

"Iran continues to deceive the world and advance its nuclear programme," he said, adding "Clearly the Ayatollahs cannot be trusted."

"And if the international community wants to avoid the spectre of nuclear terrorism, they must assure that Iran... not have the capability to develop nuclear weapons," he said.

Kishida however "stressed...the importance of support by the international community including Israel to the framework of talks" between Iran and five UN nuclear powers plus Germany, the foreign ministry said in a statement.

Tehran insists its nuclear programme is intended only to generate power for civilian purposes.

Promoted
Listen to the latest songs, only on JioSaavn.com
Iran and the five permanent members of the UN Security Council plus Germany are meeting in Vienna for a latest round of talks aimed at drafting the text of a comprehensive and potentially historic deal.

An accord would see Tehran's atomic programme drastically reduced, and sanctions lifted on its lifeblood oil exports in return.