Iran says will hit Hormuz, US bases, Israel if attacked 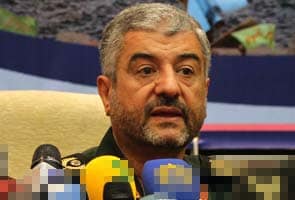 Tehran: The head of Iran's powerful Revolutionary Guards on Sunday warned of retaliation against the Gulf's strategic Strait of Hormuz, US bases in the Middle East and Israel if his country was to be attacked.

General Mohammad Ali Jafari, speaking in a very rare news conference in Tehran, also said that he believed Iran would abandon the nuclear Non-Proliferation Treaty should it be targeted for military action.

The warnings underlined the high tensions surrounding Iran and its disputed nuclear programme, which Israel has threatened it could seek to disrupt with air strikes, with or without US help.

Mr Jafari said the Strait of Hormuz, the narrow channel at the entrance of the Gulf through which a third of the world's traded oil passes, would be a legitimate target for Iran should it be attacked.

"This is a declared policy by Iran that if war occurs in the region and the Islamic republic is involved, it is natural that the Strait of Hormuz as well as the energy (market) will face difficulties," he said.

Mr Jafari suggested that US military bases -- such as those in Bahrain, Kuwait, the United Arab Emirates and Saudi Arabia -- would also be fair game for retaliation by Iranian missiles or proxy forces.

"The US has many vulnerabilities around Iran, and its bases are within the range of the Guards' missiles. We have other capabilities as well, particularly when it comes to the support of Muslims for the Islamic republic," he said.

He added that Tehran believed Israel was unsuccessfully trying to push the United States to take part in military action against Iran's nuclear facilities.

"I do not think the attack would be carried out without US permission," he said.

However if Israeli jets or missiles did strike Iran, "nothing of Israel will be left, considering its size," he warned.

"I do not think any part of Israel will be untouched given our missile capabilities. Thus, our response (warning of annihilatory retaliation) is in itself a deterrent."

Mr Jafari said that his personal opinion was that, in case of attack, Iran would leave the NPT which is meant to prevent states developing nuclear weapons while permitting atomic energy generation.

Promoted
Listen to the latest songs, only on JioSaavn.com
"In case of an attack, Iran's obligations will change. My assessment is that Iran may leave the NPT -- but it would not mean a dash towards a nuclear bomb because we have a religious edict from the supreme leader" against atomic weapons, he said.