Inside Amazon's Spheres, Where Workers Chill In A Rainforest

The glass orbs Amazon.com is set to unveil Monday were built to let workers escape from emails, meetings, reports and deadlines in greenery filled spheres. 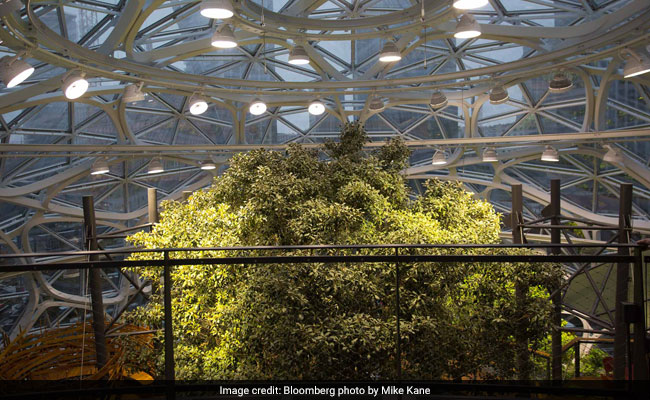 The top of "Rubi," a 55-foot-tall Ficus rubiginosa, at the Amazon Spheres in Seattle.

Three years ago, Amazon.com's horticulturalist was giving Jeff Bezos a preview of what the company's three plant-filled spheres-the centerpiece of its $4 billion downtown Seattle office project-would look like on opening day.

One rendering showed the view from a 30-foot-high suspension bridge looking down on a tree. The next showed the same tree as it would look five years later, branches stretching high above the bridge to form a canopy, giving Amazonians the feeling of walking through a rainforest.

Bezos didn't want to wait for the little tree to grow.

"The question I got back was, 'well, can we have year five on day one,'" says Ron Gagliardo, the project's lead horticulturalist. "And that's kind of been our motto ever since."

The online retailer is scheduled to unveil the spheres Monday morning following seven years of planning and construction. The glass orbs were built to let Amazon workers escape from emails, meetings, reports and deadlines to walk along stone paths beside waterfalls, let ferns from South America brush their shoulders and the moist, tropical air fill their lungs. 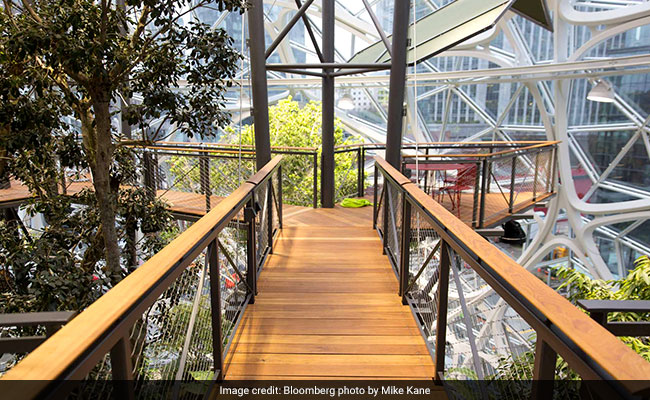 The suspension bridge near Rubi, the tree, in one of the Amazon.com spheres in Seattle.

"It's Always Day One" has been Bezos' mantra ever since he founded his company 24 years ago, and that startup ethos has remained intact even as Amazon swelled to more than 540,000 employees worldwide and annual revenue of almost $180 billion. "Day One" is so integral to Amazon culture that it is the name of the new Seattle tower where Bezos spends most of his working hours.

But when you're building a conservatory with 40,000 plants from around the world, Day One would resemble a barren wasteland recovering from a forest fire. So the team of plant specialists, architects and construction workers had to put their own twist on the boss's catchphrase to create a mature, living environment: "Day One is Year Five."

The trickiest part of the project was transporting a 55-foot-tall tree nicknamed Rubi (short for Ficus rubiginosa) from a southern California farm to downtown Seattle, where it was hoisted by crane last summer and dropped through a hole in the roof. Finding and cultivating plants from around the world while simultaneously building their new home wasn't easy. The project created 600 full-time jobs from design through construction.

"Accomplishing year five on day one presented a really big challenge for us," says M. David Sadinsky, an architect with the firm NBBJ that designed the spheres. "We realized we had to finish the sphere, take part of it back apart, drop the tree in and then put it back together again." 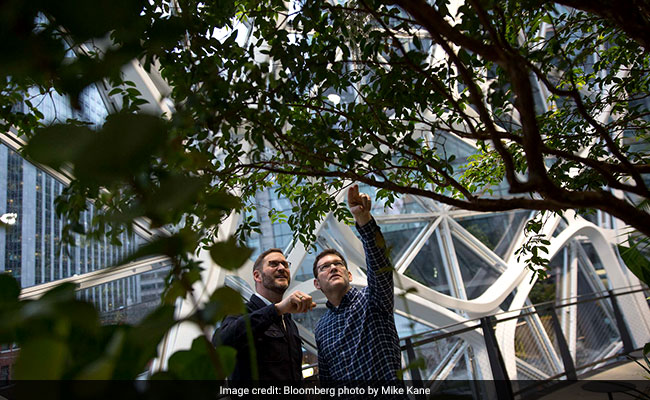 From the outside, the three connected spheres resemble a glass-and-steel sculpture of a triple-scoop sundae. The biggest sphere is 90 feet high and 130 feet wide. Inside, visitors first notice the warm, moist air, about 72 degrees and 60 percent humidity, compared with the 30 percent humidity in a typical office. Eyeglasses fog over and sweat beads on foreheads while bodies adjust. Just inside the doors is a five-story "living wall" cascading with greenery. The climate varies throughout so visitors can find a "micro-climate" to their liking. The temperature swings as much as five degrees, a big difference in the humid environment, and ventilation systems simulate an outdoor breeze.

Wi-Fi is available for those looking to work, as well as small meeting spaces like the "bird's nest," perched along the suspension bridge beneath Rubi that resembles a tree fort swaying in the branches. The spheres can accommodate 800 people at a time, and Amazon will use employee badges to monitor time spent inside and make sure no one hogs the tree fort. Management wants employees to relax, just not too much.

Promoted
Listen to the latest songs, only on JioSaavn.com
Besides creating a park-like setting where workers can recharge, the spheres will serve as a recruiting tool, says John Schoettler, who runs Amazon's global real estate division and oversaw the project. Candidates interviewed in the spheres will leave with the impression that Amazon remains a forward-thinking company, he says.

"From the moment we started construction, people would stand on the street corners taking photographs," Schoettler said. "This structure is about thinking big and thinking long term."