Public flogging is a common punishment in Aceh for a range of offences including gambling, drinking alcohol, and having gay sex or relations outside of marriage 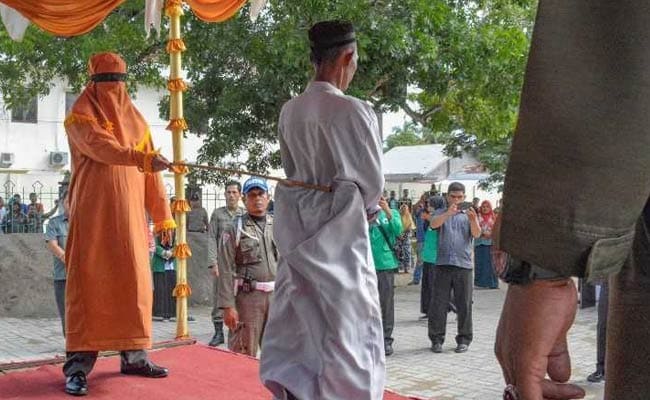 A group of men caught gambling were publicly whipped in Indonesia's conservative Muslim province of Aceh on Tuesday as a crowd of onlookers cheered.

The half dozen men were arrested this year at an internet cafe for online gambling -- an offence under Islamic law -- earning them between seven and 11 strokes each from a rattan cane.

At least one of the men winced in pain as a masked sharia officer lashed his back outside a mosque in East Aceh district.

Dozens in the crowd jeered and called for the men to be whipped harder.

"They have violated the Qanun Jinayah (Islamic law) by being involved in gambling," Muliana, head of the general crime unit at the local prosecutors' office, told AFP.

Public flogging is a common punishment in Aceh for a range of offences including gambling, drinking alcohol, and having gay sex or relations outside of marriage.

Located at the northern tip of Sumatra island, it is the only province in the world's largest Muslim-majority country that imposes Islamic law.

Aceh adopted sharia after it was granted special autonomy in 2001, an attempt by the central government to quell a long-running separatist insurgency.

Rights groups slam public caning as cruel, and Indonesia's President Joko Widodo has called for it to end.

But the practice has wide support among Aceh's mostly Muslim population -- around 98 percent of its five million residents practise Islam.

Earlier this year, Aceh said that flogging would be carried out behind prison walls in future, but some local governments have continued public whippings.