Photos And DNA Tests As Indonesians Search For Lost Relatives

An eruption at the Anak Krakatoa volcano, which sits in the middle of the Sunda Strait between Java and Sumatra islands, caused a section of the crater to collapse and slide into the ocean, triggering the killer tsunami, officials have said. 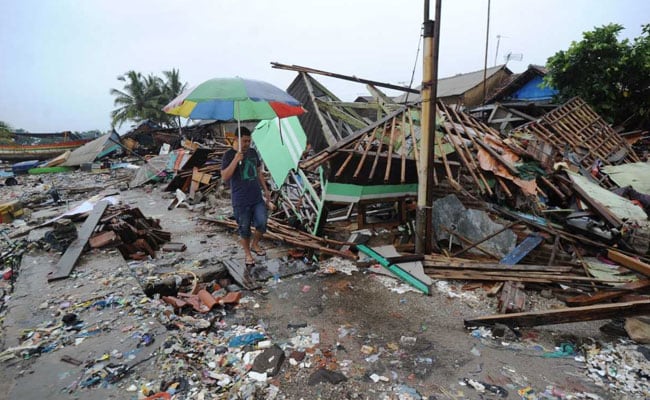 A volcano known as the "child" of Krakatoa - hit the west coast of Indonesia on December 22.

Grief-stricken Indonesians queued with photos or waited on DNA tests Wednesday, to find out if their missing loved ones were among bodies being held in a hospital morgue after a devastating tsunami tore families apart.

"I'm scared," said Tubagus Cecep, 63, as he waited nervously at a hospital in devastated Carita for test results on a body he fears could be that of his son.

"But if I keep my faith in God maybe he could have been swept away somewhere and is still alive."

His son, a university student due to graduate in five months, hasn't been seen since since the day of the disaster, when he was on a day trip to an island off the coast of Java.

Four of his friends are also missing.

"I'm still waiting for the body to be identified. We don't know yet if it was him."

Others queued up showing photos of their loved ones on mobile phones, with officials carrying out the grisly task of checking them against bodies in the morgue.

"We've been asking them about when was the last time they saw their relative, what they were wearing, if they have any identifying marks on their body," said Nariyana, head of the local police forensics and medical services unit, who goes by one name.

The task has been made more difficult by multiple relatives making duplicate reports of missing loved ones, Nariyana said.

Also waiting was Nur Masa, who was at a Java beach with his older brother on Saturday evening when the powerful waves struck.

His brother -- who was fixing a fishing net into the sea when the wave crashed in -- has not been seen since.

"I still hope he can be found," the 33-year-old Masa quietly told AFP

"But it's been four days and four nights and he still hasn't been located."

An eruption at the Anak Krakatoa volcano, which sits in the middle of the Sunda Strait between Java and Sumatra islands, caused a section of the crater to collapse and slide into the ocean, triggering the killer tsunami, officials have said.

The disaster agency slightly raised the death toll Wednesday to 430, with 1,495 people injured and another 159 missing.