The family killed at least 18 people, including themselves, by bombing the churches in Indonesia's second-biggest city of Surabaya on Sunday. 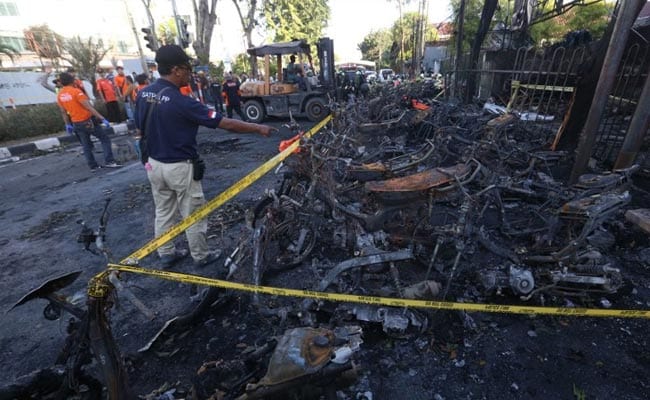 Surabaya, Indonesia: The mother of an Indonesian family of six who launched suicide bomb attacks on three churches chatted to neighbours about schooling and swapped recipes, leading what appeared to be a regular middle-class life and eluding counter-terrorism forces.

The family killed at least 18 people, including themselves, by bombing the churches in Indonesia's second-biggest city of Surabaya on Sunday in the worst terrorist attacks in the world's biggest Muslim-majority country in more than a decade.

Home was a quiet, relatively affluent neighbourhood of Surabaya. Most houses in the area have hatchbacks and family cars parked outside and in front a small yard more often than not strewn with toys and children's bicycles.

"My wife talked to the mother all the time about the children's education, about recipes. They often met at the local market," said Wery Trikusuma, who lives next door.

"They were quite open and interactive. They contributed money to neighbourhood repairs for example for roads. They often left their front gates open to receive guests, he said, adding it "seemed impossible that they could do this".

The day after the church bombings, six died, including four bombers, in another suicide attack. Another family of five blew themselves up, but the eight-year-old daughter survived.

In another blast in an apartment near Surabaya on Sunday night, three members of a family believed to have been making bombs were killed when one device went off by accident. Three children survived.
Police also later shot dead four people with suspected links to the attacks.

Police suspect the attacks were carried out by a cell of the ISIS inspired Jemaah Ansharut Daulah (JAD), an umbrella organisation on a U.S. State Department terrorist list that is reckoned to have drawn hundreds of Indonesian sympathisers of the extremist group.

The families all lived in ordinary middle-class districts where neighbours say they saw few things to mark them out.

"We had received very raw intelligence that there may be an attack in the week before Ramadan but not about when exactly or where," said a senior government official, referring to the Muslim fasting month that started on Thursday in Indonesia.

"But there was never any report about an entire family being used, or that that was even possible."

Police say the father in the family that attacked the churches, Dita Oepriarto, was head of the local JAD cell and likely radicalised decades earlier.

Indonesia set up a counter-terrorism unit, Detachment, or "Densus", 88, in 2003 which is credited with thwarting hundreds of plots, but the Surabaya attacks mark the squad's biggest challenge in decades.
In all, around 30 people have been killed since Sunday in the attacks, including 13 of the suspected suicide bombers.

According to the senior government official, President Joko Widodo decided not to fire top security personnel when he learnt of the shocking nature of the attacks and instead called for action to dismantle the networks and said he would use executive powers to force through a strengthened anti-terrorism law if parliament did not act.

The presidential palace did not respond to requests for comment.

"This attack demonstrates that entire communities and families can be radicalised," Rohan Gunaratna, a Singapore based terrorism expert, said.

"This means that a catch and kill response alone will not work. The government must engage more with community leaders, schools, religious leaders in addition to expanding counter-terrorism capabilities," he said.

Wawan Purwanto, a spokesman for the intelligence agency, said terrorists were being influenced by tactics in the Middle East, where children and women have been used in attacks.

He said there may also have been a belief that the whole family would enter heaven by carrying out an attack together.

Promoted
Listen to the latest songs, only on JioSaavn.com
Ansyad Mbai, a former head of Indonesia's anti-terrorism agency (BNPT), said using a family unit for an attack helped ensure planning was kept secret.

The parents of the families had indoctrinated their children and every Sunday evening made them attend a prayer circle with adults, police said.
© Thomson Reuters 2018