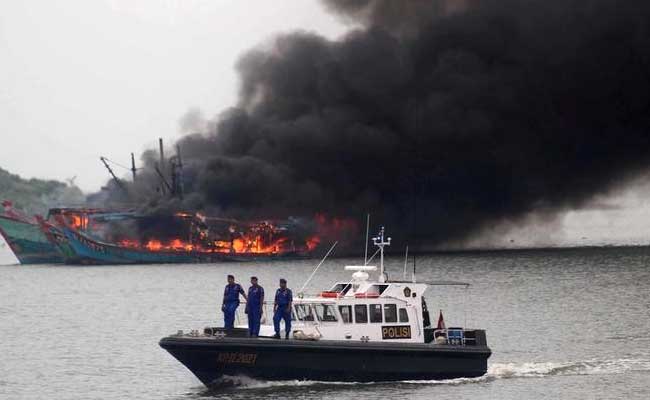 The Southeast Asian country has some of the world's richest fishing grounds. (Reuters)

JAKARTA: Indonesia destroyed 81 mostly foreign boats at the weekend that had been caught illegally fishing in its waters, taking to more than 300 the number sunk since President Joko Widodo launched a battle against the poaching of fish in 2014.

The Southeast Asian country has some of the world's richest fishing grounds, but authorities have struggled to prevent trawlers, often from Asian neighbours, from making incursions into the seas around the vast archipelago.

Maritime Affairs and Fisheries Minister Susi Pudjiastuti said she hoped the sinking of the ships would be a deterrent for perpetrators of illegal trawling. "We hope that Sino is a symbol of our victory over fish poaching," Pudjiastuti said in a statement, referring to one of the ships sunk, after having witnessed two vessels being destroyed in Ambon in eastern Indonesia.

Boats were sunk in 12 different locations around Indonesia on Saturday, the ministry said in its statement.

The tougher policy on illegal fishing has at times caused tension with neighbours. Last year, a Chinese coast guard vessel intervened when Indonesia attempted to detain a Chinese vessel for fishing illegally in waters near the contested South China Sea.

In 2014, Indonesia estimated that illegal fishing was costing it 101 trillion in Indonesian currency ($7.58 billion) a year.

Since October 2014, Indonesia has destroyed 317 ships, the bulk of them from neighbouring countries such as Malaysia, Philippines, Thailand and Vietnam, according to the statement.