Indian Diaspora in Britain Urged to Invest in Energy, Manufacturing 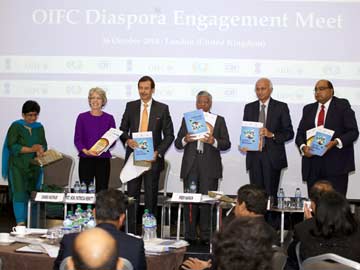 In partnership with the Ministry of Overseas Indian Affairs and Confederation of Indian Industry (CII), the OIFC was formed to facilitate the economic engagement of the Indian Diaspora with India.

The OIFC meet, which took place on Thursday, set in motion a move to link economically successful British Indians and British Nationals.

The meet was inaugurated by Ministry of Overseas Indian Affairs Secretary and OIFC Chairman, Prem Narain, an OIFC statement said.

"The overseas Indians must become a part of India's development agenda. We have brought to London, a strong mix of information on new changes in policies, new developments and directions fronted by the new Government to help translate the enthusiasm and interest in this new India," Narain said.

"The ease of doing business is the new mantra for our government. Investors coming to the Indian market have nothing to fear and this is an assurance from our Prime Minister, Narendra Modi," Narain added.

Also present at the event was Amitabh Kant, secretary in the department of industrial policy and Promotion under the ministry of commerce and industry.

"The one sentiment that echoed throughout the session was that the UK-based Indian diaspora have been a huge asset to the UK and are a living economic link between Britain and India," Patricia Hewitt, chairperson, UK-India Business Council (UKIBC), said.

She further added that the UKIBC would work towards cementing the partnership between India and Britain.

India's High Commissioner to Britain, Ranjan Mathai, said that the major difference in the government policy and outlook towards the diaspora is the move from the era of stopping the brain drain to partnering with the brain bank.

Deep Kapuria, chairman of Hi Tech Gears and leader of the Indian business delegation to Britain, talked about scientific and technical collaborations between Britain and India.


"There is no doubt in my mind about the quality of Indian products -- they are extremely good. JCB has 96 percent supply chain integrity in India," Philip Bouverat, Director of J.C. Bamford Excavators said.

Responding to questions, Amitabh Kant pointed out that the regulatory system in India is very strong. Moreover, land acquisitions norms are streamlining.

"It's a good time to invest in India", he said.

Promoted
Listen to the latest songs, only on JioSaavn.com
A closed door roundtable seeking participation in "Re-invest", a global investors' meet to be held in February 2015, to garner investment in India's ambitious renewable energy plans was held on the sidelines of the OIFC Diaspora Engagement Meet.

The OIFC Meet was attended by more than 150 overseas Indians and firms from Britain.