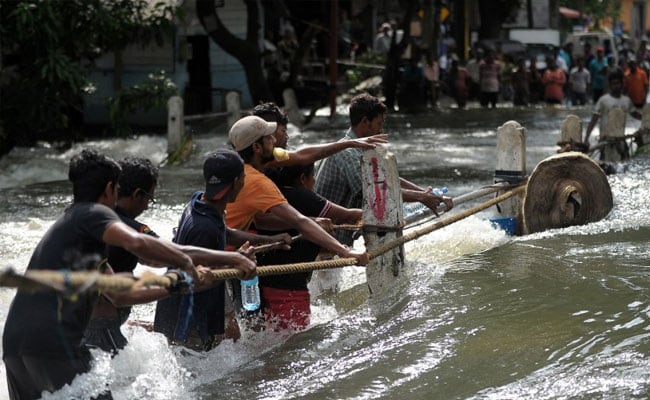 Flood-affected Sri Lankans struggle to cross a torrent of floodwaters in Kelaniya, on the outskirts of Colombo on May 21, 2016. (AFP Photo)

Colombo, Sri Lanka: Foreign aid began arriving today in Sri Lanka, bringing help to half a million people who have been driven from their homes by heavy rains and deadly landslides, as floodwaters subsided slightly, officials said.

The Sri Lankan Foreign ministry said an Indian Air Force plane carrying emergency supplies had arrived in Colombo while two Indian naval ships were also expected at the port in the capital.

Floodwater levels in parts of the capital subsided a little overnight, disaster officials said, but not enough for anyone to move back to their homes on the banks of the Kelani river.

"But there were showers upstream and we are worried that the water levels can rise again in a day."

The heaviest rains in a quarter of a century have pounded Sri Lanka since last weekend, triggering huge landslides that have buried some victims in up to 50 feet (15 metres) of mud.

More than 60 people are known to have died so far amid fears that number could spike with many more reported missing.

The Sri Lankan navy and air force took stranded residents to safety as well as bringing food and other essentials for the few who remained in their homes.

President Maithripala Sirisena urged Sri Lankans to provide shelter and donate cash or food as offers of assistance came in from overseas.

Officials said there had been a huge outpouring of sympathy for the flood victims and they received donations of food and clothing as well as dry rations.

The DMC said 22 of Sri Lanka's 25 districts had been affected. Around 300,000 people have been moved to shelters while a further 200,000 were staying with friends or family.

"Our information is that about half a million people have been driven out of their homes," Finance Minister Ravi Karunanayake told reporters on Friday.

The meteorological department says the rains have been caused by a depression in the Bay of Bengal, ahead of the arrival of the southwest monsoon.

Three people have been killed in flood-related incidents in Colombo and the national toll stands at 64 dead and 29 injured.

The district of Kegalle, about 100 kilometres (60 miles) northeast of Colombo, has been the worst hit, with the toll from two separate landslides rising to 34.