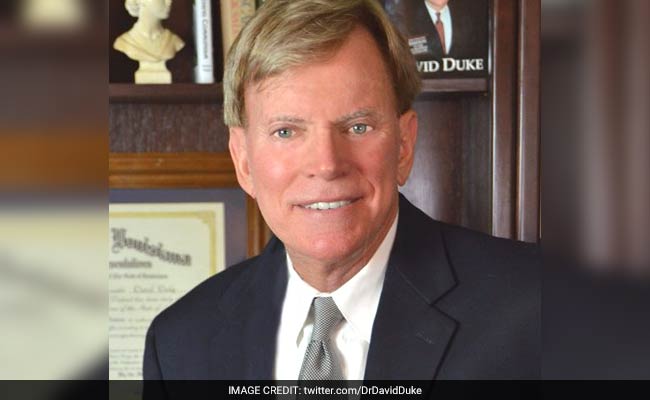 Washington, United States: White nationalist and former Ku Klux Klan leader David Duke is urging voters in a robocall to vote for him for Senate and Donald Trump in the presidential election.

"Unless massive immigration is stopped now, we'll be outnumbered and out-voted in our own nation. It's happening," Duke said in the automated call, a recording of which was posted online by Buzzfeed on Monday.

"It's time to stand up and vote for Donald Trump for president and vote for me, David Duke, for the US Senate."

The 66-year-old Duke, a former KKK imperial wizard repudiated as racist and anti-Semitic, confirmed to Buzzfeed that it was his voice on the call.

Trump, 70, was criticized by some, including members of rival Hillary Clinton's presidential campaign, for not swiftly and forcefully denouncing Duke six months ago when Duke expressed support for the provocative billionaire's White House bid.

He later disavowed Duke, but not before the incident fueled an already controversial national debate about race.

Trump's team "has no knowledge of the campaign that David Duke is running, and we have disavowed David Duke and don't condone any of the activities that he's doing," she added.

Duke, running as a Republican to fill an empty Senate seat for Louisiana, has discomfited many Republicans by pushing racial overtones onto the political stage.

The so-called "alt-right" political movement has formed a substantial chunk of Trump's base of support. Clinton unveiled an attack ad last week seeking to paint Trump as the candidate for neo-Nazis, racists and white supremacists.

Promoted
Listen to the latest songs, only on JioSaavn.com
Duke has run unsuccessfully for multiple political positions including president, although he did serve in the Louisiana House from 1989 until 1992.

On Monday, Clinton called Duke "despicable," telling supporters in Easthampton, New York that she "wanted to pull it out from under the rock so people could see it and understand that David Duke has endorsed Donald Trump."