Peter Madsen, 47, had admitted chopping up the 30-year-old's body and throwing her remains overboard in waters off Copenhagen. 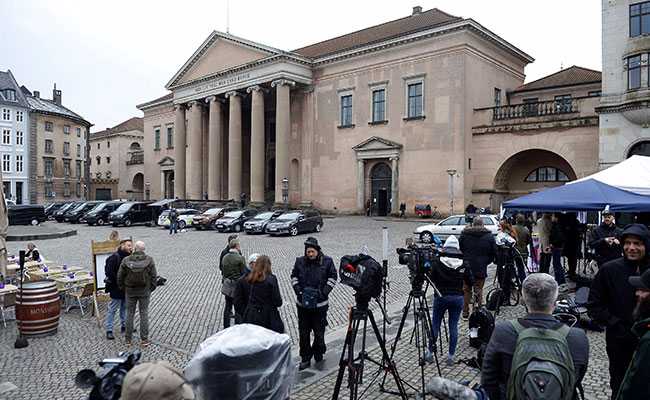 Members of media walk in front of court in Copenhagen.

Madsen, 47, had admitted chopping up the 30-year-old's body and throwing her remains overboard in waters off Copenhagen on the night of August 10, 2017, but claimed her death was accidental.

"He committed a cynical, planned murder, of a particularly brutal nature," judge Anette Burko said as she read out the verdict, adding that Madsen "dismembered the body in order to hide the evidence of murder."

A life sentence in Denmark averages around 16 years.

Wearing a black T-shirt and blazer, Madsen stood in the courtroom to hear the ruling. As it was read out, he sat down next to his lawyer, visibly affected and dejected.

"My client and I are not satisfied with the conclusions the court has drawn. That is why my client will appeal," she told reporters.

Wall, a freelance reporter, had set off with the eccentric, self-titled "inventrepreneur" on his vessel on the evening of August 10 to interview him.

Reported missing by her boyfriend, Wall's remains were retrieved from waters off Copenhagen in the weeks following her death. During the trial, prosecutor Jakob Buch-Jepsen argued that Madsen killed Wall as part of a macabre sexual fantasy, showing the court videos found on Madsen's computer of women being tortured, beheaded, impaled, and hanged.

'Untrustworthy'
Madsen confessed to stuffing the journalist's head, arms and legs into plastic bags, weighing them down with metal pipes before tossing them into the sea.

"He tried to create the perfect crime," Buch-Jepsen told the court.

But after changing his version of events several times, he testified that she died when the air pressure suddenly dropped and toxic fumes filled his vessel as he was up on deck.

Despite the testimony of many experts, the lack of tangible evidence in the case and the decomposed state of Wall's remains made it impossible to determine an exact cause of death.

An autopsy report concluded she probably died as a result of suffocation or having her throat slit.

Fourteen stab wounds and piercings were also found in and around her genital area.

Madsen had argued that he stabbed her because he wanted to prevent gases from building up inside her body that would prevent it from sinking to the seabed.

The court -- made up of one professional judge and two lay judges -- found the incriminating circumstances were enough to find Madsen guilty, citing the gruesome videos he watched, the fact that he brought a saw, plastic strips and a sharpened screwdriver on board just before the voyage, and the fact that he invited three other women onto the vessel around the same time who all turned him down.

The judge said the court found Madsen "untrustworthy", noting that his explanations about why he brought the objects on board, and how and why he cut up the body, were not reasonable.

The court found that Wall's remains showed "signs of trauma when she was still alive, and wounds from around the time of death or shortly after."

The prosecution also presented as evidence the fact that on the night before Wall boarded his vessel, he googled "beheaded girl agony", which Madsen tried to claim was "pure coincidence".

He also told the court his interest in the videos was "not of a sexual nature."

'Loving psychopath'
In his final words to the court on Monday, Madsen said: "I'm really, really sorry for what happened."

"What was decisive (for the court) was that it was a crime that was prepared and planned," the prosecutor told reporters after the verdict.

Psychiatric experts who evaluated Madsen -- who described himself to friends as "a psychopath, but a loving one" -- found him to be "a pathological liar" who poses "a danger to others" and who was likely to be a repeat offender.

He is a semi-celebrity in Denmark, known for his ambitious development of rockets and amateur space travel.

Wall was an award-winning journalist who criss-crossed the globe in search for intrepid and unique news stories.

The New-York based Committee to Protect Journalists issued a statement welcoming Wednesday's verdict.

Promoted
Listen to the latest songs, only on JioSaavn.com
"This gruesome crime and the tragic loss of Kim Wall is a reminder that freelance and women journalists in particular can be exposed to great risk, even when they least expect it," it said.