The comment came during a serious discussion about refugees, in which Cate Blanchett condemned what she said was a lack of political leadership in addressing the refugee problem. 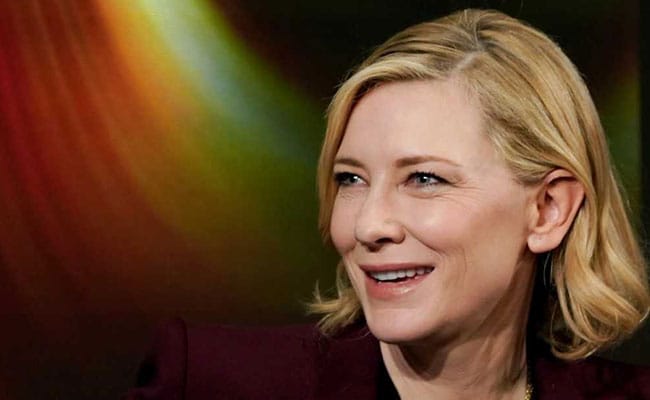 Cate Blanchett was honoured by the WEF for raising awareness about human rights. (Reuters)

Davos: Actress Cate Blanchett, speaking at the World Economic Forum in Davos on Tuesday, drew laughs when she jokingly speculated about playing First Lady Melania Trump on screen, saying she would not approach such a role from a "Free Melania" point of view.

The comment came during a serious discussion about refugees, in which Blanchett, a goodwill ambassador for the UN's refugee agency, condemned what she said was a lack of political leadership in addressing the refugee problem, without mentioning President Donald Trump by name.

"When I'm playing a character I think you have to present people warts and all," she said in an on-stage interview with New York Times reporter Nicholas Kristof, who has written extensively about refugees.

"If I was playing Melania Trump -- not that I would probably be cast in that role -- I wouldn't be necessarily coming from the place of 'Free Melania'," she continued to chuckles in the audience.

"I'd be trying to understand the situation so that you could then throw that back at an audience and say: 'What's her position as a woman? What does she think? What's it like being married to -- you know'."

Blanchett was honoured by the WEF on Monday, along with singer Elton John and actor Shah Rukh Khan, for raising awareness about human rights.

Promoted
Listen to the latest songs, only on JioSaavn.com
At the panel on Tuesday, her voice broke as she described meeting a Syrian refugee family in Jordan that had been forced to flee their country under gunfire, with the father jettisoning suitcases so he could carry his children across the border.
© Thomson Reuters 2018

(This story has not been edited by NDTV staff and is auto-generated from a syndicated feed.)
Comments
Cate BlanchettMelania TrumpDavos 2018