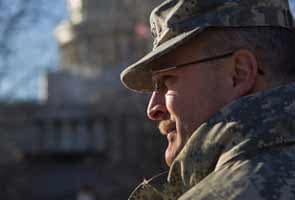 Washington: On his second yearlong deployment to Afghanistan, Lt. Col. Daniel L. Davis travelled 9,000 miles, patrolled with American troops in eight provinces and returned in October of last year with a fervent conviction that the war was going disastrously and that senior military leaders had not levelled with the American public.

Since enlisting in the Army in 1985, he said, he had repeatedly seen top commanders falsely dress up a dismal situation. But this time, he would not let it rest. So he consulted with his pastor at McLean Bible Church in Virginia, where he sings in the choir. He watched his favourite movie, "Mr. Smith Goes to Washington," one more time, drawing inspiration from Jimmy Stewart's role as the extraordinary ordinary man who takes on a corrupt establishment.

And then, late last month, Colonel Davis, 48, began an unusual one-man campaign of military truth-telling. He wrote two reports, one unclassified and the other classified, summarizing his observations on the candour gap with respect to Afghanistan. He briefed four members of Congress and a dozen staff members, spoke with a reporter for The New York Times, sent his reports to the Defence Department's inspector general - and only then informed his chain of command that he had done so.

"How many more men must die in support of a mission that is not succeeding?" Colonel Davis asks in an article summarizing his views titled "Truth, Lies and Afghanistan: How Military Leaders Have Let Us Down." It was published online Sunday in The Armed Forces Journal, the nation's oldest independent periodical on military affairs. "No one expects our leaders to always have a successful plan," he says in the article. "But we do expect - and the men who do the living, fighting and dying deserve - to have our leaders tell us the truth about what's going on."

Colonel Davis says his experience has caused him to doubt reports of progress in the war from numerous military leaders, including David H. Petraeus, who commanded the troops in Afghanistan before becoming the director of the Central Intelligence Agency in June.

Last March, for example, Mr. Petraeus, then an Army general, testified before the Senate that the Taliban's momentum had been "arrested in much of the country" and that progress was "significant," though fragile, and "on the right azimuth" to allow Afghan forces to take the lead in combat by the end of 2014.

Colonel Davis fiercely disputes such assertions and says few of the troops believe them. At the same time, he is acutely aware of the chasm in stature that separates him from those he is criticizing, and he has no illusions about the impact his public stance may have on his career.

"I'm going to get nuked," he said in an interview last month.

But his bosses' initial response has been restrained. They told him that while they disagreed with him, he would not face "adverse action," he said.

Col. James E. Hutton, chief of media relations for the Army, declined to comment specifically about Colonel Davis, but he rejected the idea that military leaders had been anything but truthful about Afghanistan.

"We are a values-based organization, and the integrity of what we publish and what we say is something we take very seriously," he said.

A spokeswoman for Mr. Petraeus, Jennifer Youngblood of the C.I.A., said he "has demonstrated that he speaks truth to power in each of his leadership positions over the past several years. His record should stand on its own, as should LTC Davis' analysis."

If the official reaction to Colonel Davis's campaign has been subdued, it may be partly because he has recruited a few supporters among the war sceptics on Capitol Hill.

"For Colonel Davis to go out on a limb and help us to understand what's happening on the ground, I have the greatest admiration for him," said Representative Walter B. Jones, Republican of North Carolina, who has met with Colonel Davis twice and read his reports.

Senator Jeff Merkley, Democrat of Oregon, one of four senators who met with Colonel Davis despite what he called "a lot of resistance from the Pentagon," said the colonel was a valuable witness because his extensive travels and midlevel rank gave him access to a wide range of soldiers.

Moreover, Colonel Davis's doubts about reports of progress in the war are widely shared, if not usually voiced in public by officers on duty. Just last week, Senator Dianne Feinstein, Democrat of California and chairwoman of the Senate Intelligence Committee, said at a hearing that she was "concerned by what appears to be a disparity" between public testimony about progress in Afghanistan and "the bleaker description" in a classified National Intelligence Estimate produced in December, which was described in news reports as "sobering" and "dire."

Those words would also describe Colonel Davis's account of what he saw in Afghanistan, the latest assignment in a military career that has included clashes with some commanders, but glowing evaluations from others. ("His maturity, tenacity and judgment can be counted on in even the hardest of situations, and his devotion to mission accomplishment is unmatched by his peers," says an evaluation from May that concludes that he has "unlimited potential.")

Colonel Davis, a son of a high school football coach in Dallas and who is known as Danny, served two years as an Army private before returning to Texas Tech and completing the Reserve Officer Training Corps program. He served in Germany and fought in the first Iraq war before joining the Reserve and working civilian jobs, including a year as a member of the Senate staff.

After the Sept. 11 attacks, he returned to active duty, serving a tour in Iraq as well as the two in Afghanistan and spending 15 months working on Future Combat Systems, an ambitious Army program to produce high-tech vehicles linked to drones and sensors. On that program, too, he said, commanders kept promising success despite ample evidence of trouble. The program was shut down in 2009 after an investment of billions of dollars.

In his recent tour in Afghanistan, Colonel Davis represented the Army's Rapid Equipping Force, created to bypass a cumbersome bureaucracy to make sure the troops quickly get the gear they need.

He spoke with about 250 soldiers, from 19-year-old privates to division commanders, as well as Afghan security officials and civilians, he said. From the Americans, he heard contempt for the perceived cowardice and double-dealing of their Afghan counterparts. From Afghans, he learned of unofficial nonaggression pacts between Afghanistan's security forces and Taliban fighters.

When he was in rugged Kunar Province, an Afghan police officer visiting his parents was kidnapped by the Taliban and killed. "That was in visual range of an American base," he said. "Their influence didn't even reach as far as they could see."

Some of the soldiers he interviewed were later killed, a fact that shook him and that he mentions in videos he shot in Afghanistan and later posted on YouTube. At home, he pored over the statements of military leaders, including General Petraeus. He found them at odds with what he had seen, with classified intelligence reports and with casualty statistics.

"You can spin all kinds of stuff," Colonel Davis said. "But you can't spin the fact that more men are getting blown up every year."

Colonel Davis can come across as strident, labelling as lies what others might call wishful thinking. Matthew M. Aid, a historian who examines Afghanistan in his new book "Intel Wars," says that while there is a "yawning gap" between Pentagon statements and intelligence assessments, "it's oversimplified to say the top brass are out-and-out lying. They are just too close to the subject."

But Martin L. Cook, who teaches military ethics at the Naval War College, says Colonel Davis has identified a hazard that is intrinsic to military culture, in which a can-do optimism can be at odds with the strictest candour when a mission is failing.

"You've trained people to try to be successful even when half their buddies are dead and they're almost out of ammo," he said. "It's very hard for them to say, 'can't do.' "

Promoted
Listen to the latest songs, only on JioSaavn.com
Mr. Cook said it was rare for an officer of Colonel Davis's modest rank to "decide that he knows better" and to go to Congress and the news media.

"It may be an act of moral courage," he said. "But he's gone outside channels, and he's taking his chances on what happens to him."