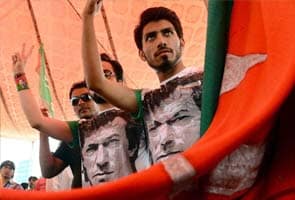 Islamabad: Imran Khan's Pakistan Tehrik-e-Insaf is set to form government in the militancy-hit Khyber-Pakhtunkhwa province with the backing of the Jamaat-e-Islami while the PML-N and several smaller parties are expected to form a coalition in the restive Balochistan province.

The Pakistan Tehrik-e-Insaf emerged the single largest party in Khyber-Pakhtunkwa by bagging 35 of the 99 directly elected seats - far short of a simple majority.

The Jamaat-e-Islami, which won seven seats, announced last night it would back Imran Khan's party's efforts to from government in the province affected by years of Taliban violence.

The Pakistan Tehrik-e-Insaf named senior leader Pervez Khattak as its choice for the post of Chief Minister of the crucial province.

During his campaign in the northwest, Imran Khan had promised to pull Pakistan out of the US-led war on terror and to shoot down CIA-operated drones that carry out attacks in the tribal belt.

He will be hard pressed to deliver on such promises as the federal government, to be formed by the PML-N, is expected to take a more pragmatic approach to ties with the US.

In the militancy-hit southwestern province of Balochistan, the PML-N, the Pashtunkhwa Milli Awami Party and the National Party emerged as the three main parties in a fractured political landscape.

They are now expected to form a coalition. The PML-N and PMAP bagged nine seats each out of the 51 directly elected seats in the Balochistan Assembly while the National Party won six seats.

PML-N leaders Mir Jan Mohammad Khan Jamali and Sanaullah Zehri and Nawab Ayaz Khan Jogezai of the PMAP have been tipped for the post of Chief Minister of Balochistan.

The Pakistan People's Party did not win any national or provincial assembly seats in Balochistan.

It had won 15 provincial assembly seats and six parliamentary seats in the 2008 polls.

In the most populous province of Punjab, the PML-N bagged 212 of the 297 directly elected and is comfortably placed to form government.

Promoted
Listen to the latest songs, only on JioSaavn.com
In Sindh, the PPP bagged 62 of the 130 directly elected seats and is set to form government with its ally, the Muttahida Qaumi Movement, which won 37 seats.