Seek Ties With US Like They Have With India "Right Now": Imran Khan

Imran Khan expressed his disappointment that his bid to normalise ties with India did not make any progress though he approached Prime Minister Narendra Modi soon after assuming office in August 2018. 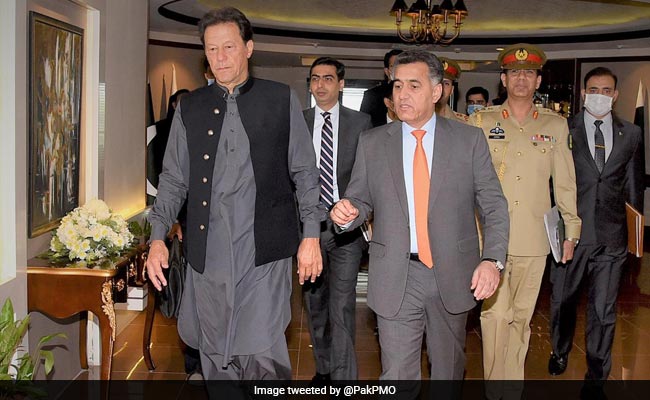 Pakistan is seeking a "civilised" and "even-handed" relationship with Washington like the one that existed between the US and the UK or with India "right now", Prime Minister Imran Khan has said, underlining the role Islamabad could play in the region, including in Afghanistan after America leaves the war-torn country.

Mr Khan made the comments during an interview with The New York Times in which he also expressed his disappointment that his bid to normalise ties with India did not make any progress though he approached Prime Minister Narendra Modi soon after assuming office in August 2018.

In the interview that comes as US President Joe Biden had his first face-to-face meeting with his Afghan counterpart Ashraf Ghani at the White House on Friday, Mr Khan recalled that Pakistan has had a closer relationship with the US than other nations in the region, such as India, and was a US partner in the war against terrorism, Dawn newspaper reported.

"Now, after the US leaves Afghanistan, basically Pakistan would want a civilised relationship, which you have between nations, and we would like to improve our trading relationship with the US," he said.

Asked to elaborate his concept of a civilised relationship, Mr Khan said he was seeking relations like the one that existed "between the US and Britain, or between US and India right now. So, a relationship which is even-handed".

"Unfortunately, the relationship during the war on terror was a bit lopsided," he said.

"It was a lopsided relationship because the US felt that they were giving aid to Pakistan, they felt that Pakistan then had to do US' bidding.

"And what Pakistan did in terms of trying to do the US bidding cost Pakistan a lot … 70,000 Pakistanis died, and over $150 billion were lost to the economy because there were suicide bombings and bombs going on all over the country," he said.

The main problem with this lopsided relationship was that "Pakistani governments tried to deliver what they were not capable of," and it led to a "mistrust between the two countries," Mr Khan said.

"And people in Pakistan felt they paid a heavy, heavy price for this relationship. And the US thought Pakistan had not done enough."

The prime minister said that his government wanted the future relationship to be based on trust and common objectives, including a peaceful and stable Afghanistan.

The US and the Taliban have signed a landmark deal in Doha on February 29, 2020 following multiple rounds of negotiations to bring lasting peace in war-torn Afghanistan and allow US troops to return home, effectively drawing curtains on America''s longest war.

Mr Khan said he could not predict the future of the military and security relationship between Pakistan and the US.

"Post the US withdrawal, I don't know what sort of military relationship it will be. But right now, the relationship should be based on this common objective that there is a political solution in Afghanistan before the United States leaves," he stressed.

Asked if Pakistan was still using its leverage with the Taliban to move the peace talks towards a deal, Mr Khan said, "Pakistan has used the maximum leverage it could on the Taliban."

He said the US decision to fix a date for withdrawing its troops from Afghanistan also diminished Pakistan''s leverage on the Taliban.

"Given that the US gave a date of withdrawal, from then onward, our leverage diminished on the Taliban. And the reason is that the moment the United States gave a date of exit, the Taliban basically claimed victory," Mr Khan said.

"They're thinking that they won the war. And so, therefore, our ability to influence them diminishes the stronger they feel."

Mr Khan said Pakistan has been emphasising to the Taliban that they should not go for a military victory because it would only lead to a protracted civil war.

In the interview, Mr Khan also claimed that Pakistan would have had a better relationship with India if it had a different government and they would have resolved all their differences through dialogue.

"When I assumed office, the first thing I did was I made this approach to Prime Minister Modi (to seek) a normal, civilised trading relationship...We tried but didn't get anywhere," he said.

"Had there been another Indian leadership, I think we would have had a good relationship with them. And yes, we would have resolved all our differences through dialogue," Mr Khan claimed.

The strained ties between India and Pakistan deteriorated further after India announced withdrawing special powers of Jammu and Kashmir and bifurcation of the state into two union territories in August 2019.

On the Status quo in Kashmir, Mr Khan said, "I think it's a disaster for India because it will just mean that this conflict festers on and on … and (prevents) any relationship — normal relationship — between Pakistan and India."

India has told Pakistan that it desires normal neighbourly relations with it in an environment free of terror, hostility and violence.

Mr Khan said the US assumption that India would be the bulwark against China was wrong. "I think it would be detrimental for India because India's trade with China is going to be beneficial for both India and China."

Pakistan, he said, was "watching the scenario unfold and with a bit of anxiety".