Imran Khan, 70, suffered bullet injuries in the right leg on Thursday when two gunmen fired a volley of bullets at him and others mounting on a container-mounted truck in the Wazirabad area of Punjab province 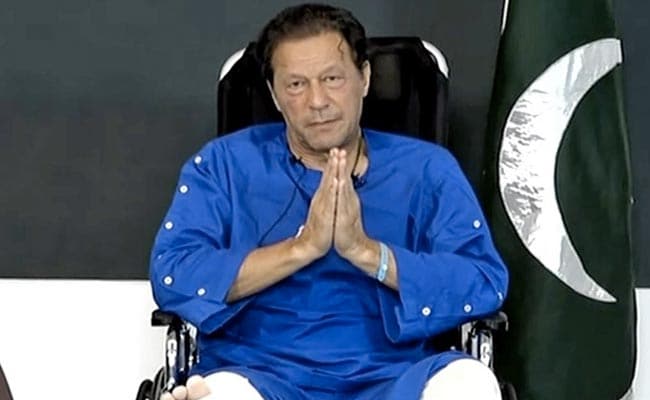 Imran Khan was ousted as prime minister in April this year. (FILE)

Pakistan's top court on Monday granted former prime minister Imran Khan one more week to submit a detailed reply in the contempt of court case presently pending in court against him.

During the proceedings, the court nonetheless admitted that a "painful incident" had occurred last Thursday and permitted Khan's lawyer's request for adjournment, the Express Tribune newspaper reported.

Khan, 70, suffered bullet injuries in the right leg on Thursday when two gunmen fired a volley of bullets at him and others mounting on a container-mounted truck in the Wazirabad area of Punjab province, where he was leading a protest march against the Shehbaz Sharif government. He underwent surgery for bullet injuries at the Shaukat Khanum Hospital in Lahore owned by his charitable organisation.

Khan's lawyer Salman Akram Raja informed the court that he managed to only hold a short meeting with the PTI chief due to the circumstances, and requested the court for more time, even though Khan's answer, he said, "is ready and if the court so pleases can be submitted".

The chief justice admitted the serious nature of the events and granted the counsel's request for more time. The court then adjourned the hearing of the contempt case until next week and gave Khan a week's time to submit a detailed reply, the paper said.

Earlier, the federal government had approached the court to initiate contempt proceedings against Khan for violating its May 25 order wherein the PTI was restricted from holding its Azadi March near Peshawar Mor between the H-9 and G-9 areas of Islamabad. However, Khan and his supporters had made their way towards D-Chowk, prompting the government to call in the army for the security of the capital's Red Zone.

The court had sought an explanation from Khan on the events of May 25, 2022, related to the PTI's first long march to Islamabad in the contempt of court case filed by the federal government.

Khan, who was ousted as prime minister in April this year after a no-confidence motion was passed in the National Assembly, is seeking fresh general elections in Pakistan. However, the federal government led by Prime Minister Shehbaz Sharif is opposed to holding elections now. The term of the current National Assembly will end in August 2023.