"Never Have Such Crowds...": Imran Khan As Supporters Protest His Ouster

Earlier, Imran Khan said that today marked the beginning of a "freedom struggle" against what he called a "foreign conspiracy of regime change". 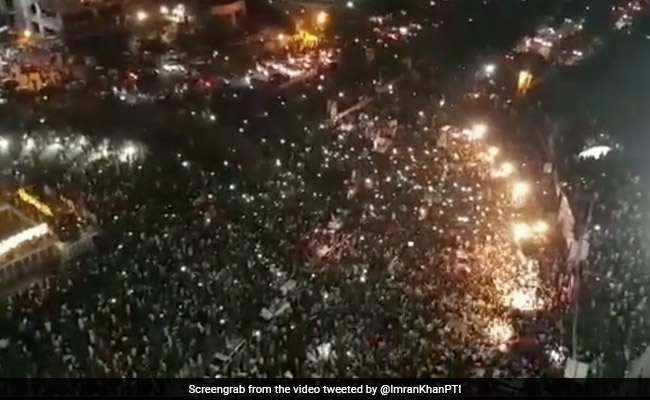 Never have such crowds come out so spontaneously, said Imran Khan.

Pakistan Tehreek-e-Insaf (PTI) chairman Imran Khan on Monday expressed gratitude to the people of the country for supporting the protests against his ouster as the Prime Minister of Pakistan.

"Thank you to all Pakistanis for their amazing outpouring of support and emotions to protest against US-backed regime change abetted by local Mir Jafars to bring into power a coterie of pliable crooks all out on bail. Shows Pakistanis at home & abroad have emphatically rejected this," Imran Khan tweeted.

"Never have such crowds come out so spontaneously and in such numbers in our history, rejecting the imported govt led by crooks," he said in another tweet.

Never have such crowds come out so spontaneously and in such numbers in our history, rejecting the imported govt led by crooks. pic.twitter.com/YWrvD1u8MM

The Pakistan Tehreek-e-Insaf (PTI) on Sunday took out rallies in several cities of the country to protest against party chairman Imran Khan through a successful vote of no-confidence the previous night.

Earlier, Khan said that today marked the beginning of a "freedom struggle" against what he called a "foreign conspiracy of regime change". In an attempt to galvanise his supporters, he said "it is always the people who protected their own sovereignty and democracy".

"Pakistan became an independent state in 1947; but the freedom struggle begins again today against a foreign conspiracy of regime change. It is always the people of the country who defend their sovereignty & democracy," he said in another Tweet.

PTI spokesperson Fawad Chaudhry had also called on the people to stage protests after Isha prayers while speaking to the media in Islamabad earlier in the day. He said that Khan not leading a massive movement would amount to a "betrayal with the country's politics and Constitution".
The party later issued a schedule of the various protests that were planned for cities all over the country starting 9:30 pm, according to Dawn newspaper.

The protest in the capital started from Zero Point, with PTI supporters gathering and waving flags while chanting slogans in the former prime minister's favour, the publication added.

The voting on the no-confidence motion against the Imran Khan-led PTI government began in the country's National Assembly late on Saturday night where 174 members recorded their votes in favour of the resolution that ousted the Imran Khan.