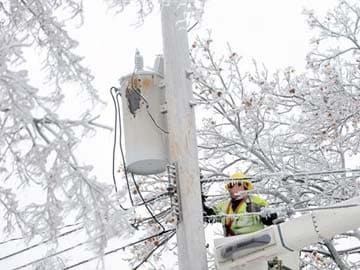 A lineman from Grand Haven Board of Light and Power works on connecting fallen wires in Lansing, Michigan, on December 23, 2013.

Augusta, Maine: Repair crews worked around the clock to restore power to nearly half a million customers who faced a cold and dark Christmas in parts of the central and northeastern United States and into eastern Canada after a weekend ice storm. At least 24 deaths have been linked to the storm.

It appears the bad weather isn't ready to take a break. The U.S. National Weather Service said more snow is forecast to roll into the Great Lakes and Midwest by Wednesday morning.

In Canada, five people were reported dead from apparent carbon monoxide poisoning. Police said two people in Ontario died after using a gas generator to heat their blacked-out home northeast of Toronto. Police in Quebec said carbon monoxide poisoning was believed to be the cause of three deaths in a chalet on the province's North Shore. Earlier, five people were killed in eastern Canada in highway crashes blamed on severe weather conditions.

As temperatures plunged into the low single digits (below minus 15 Celsius) in Toronto - where nearly 80,000 customers remained without power late Tuesday - authorities reported a dramatic jump in calls for suspected carbon monoxide poisoning, responding to 110 calls in a 24-hour period. Officials said they typically see 20 such calls a day.

"We're looking at approximately six times as many calls," Toronto Mayor Rob Ford said as the city issued an extreme cold weather alert. "I understand they want to keep warm but you cannot do this. This is deadly."

Fire officials warned residents not to use any appliance that burns inside a home, and even cautioned against using a lot of candles.

In Toronto, where 300,000 customers lost power at the height of the storm, crews from Ottawa, Windsor, Manitoba and Michigan were helping local teams with their efforts.

Canadian utility officials warned that some customers could be without power until Saturday.

The number of customers in Maine without power spiked to more than 100,000 on Tuesday. Central Maine Power said its goal was to use more than 1,000 workers to restore power for all customers by Thursday night, while other utilities in Maine warned customers they could be without electricity until Friday.

That was the case, too, in Michigan, where Jackson-based Consumers Energy - the state's largest utility - said it hadn't had this many outages during any Christmas week since its founding 126 years ago. Close to 17 percent of its 1.8 million electric customers lost power during the storm that hit late Saturday; roughly 152,000 remained without it Tuesday.

At their home outside Flint, Michigan, John Potbury and his family of four lost electricity at 6 a.m. Sunday and since then they have been living in a single bedroom warmed by generator-powered space heaters.

Lights on the Christmas tree were dark, of course, but there was no power to the freezer, either. "Even though the house is freezing cold, the freezer items were starting to thaw out," Potbury said.

Promoted
Listen to the latest songs, only on JioSaavn.com
That wasn't the greatest concern, however, for his kids, 8-year-old Jacob and 5-year-old Jackson. Potbury said he told them Tuesday, "Santa runs on reindeer power, not electricity, so he should be OK."