Hundreds Protest In Brazil Against Jair Bolsonaro, Demand His Impeachment

The street protests in Brazil's Rio de Janeiro, Sao Paulo and Belo Horizonte, among other cities, were convened by conservative-leaning social organizations. 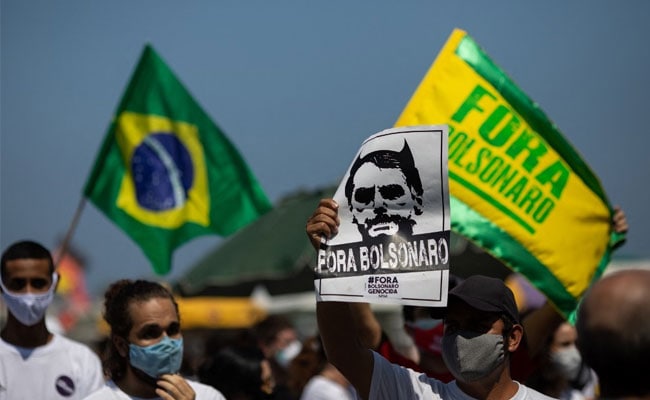 Brazil protests: A single message resounded through the crowd: "Out with Bolsonaro."

The street protests in Rio de Janeiro, Sao Paulo and Belo Horizonte, among other cities, were convened by conservative-leaning social organizations like Movimento Brasil Livre (Free Brazil Movement, or MBL), which pressed for the impeachment of leftwing president Dilma Rousseff in 2016.

Organizers expected large crowds, but without the support of groups like Lula's Workers' Party (PT) the demonstrations were smaller than anticipated.

In Rio, a few hundred demonstrators gathered early Sunday on Copacabana beach. Many wore white as a sign of political neutrality but waved Brazilian flags -- often identified with the right -- or the rainbow colors of the LGBT movement, or wore "Lula 2022" t-shirts.

A single message resounded through the crowd: "Out with Bolsonaro."

Hundreds of white-clad protesters gathered in downtown Sao Paulo, the nation's economic engine, for a rally that was dwarfed by the 125,000 Bolsonaro supporters who converged on the same streets last Tuesday.

"But I'm scared about how many people came out to support a president (Bolsonaro) who has done nothing for the country, who has only brought conflict."

Almost a year out from the election, polls show Lula, a former union leader who served as president from 2003 to 2010, with a sizeable lead over the incumbent.

Iranian Woman Died Of "Blow To The Head" After Hijab Arrest, Says Family