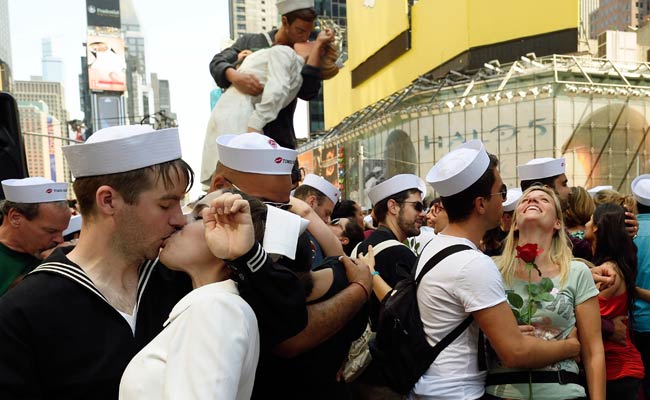 Couples, some dressed as sailors and nurses, embrace in Times Square on August 14, 2015 in New York. (AFP)

New York: Hundreds of couples poured into New York's Times Square today to reenact the famous photograph of a kiss between a sailor and a woman celebrating the end of World War II.

Photojournalist Alfred Eisenstaedt took the photograph as news broke that Japan had surrendered on August 14, 1945, bringing to a close the most brutal conflict the world has ever known.

The photo, known as "V-J Day in Times Square" for Victory over Japan, shows an American sailor kissing a woman in white, full on the mouth as her right foot rises off the ground.

Some of couples turned out in replica outfits, the men dressed in sailor suits and the women in white. They clasped each other, locking lips in the same pose to the delight of passing tourists.

World War II veterans Ray and Ellie Williams, who got married on August 15, 1945, were guests of honor and flew in from the southern US state of Georgia for the event.

Ray Williams said he remembered the joy and jubilation that greeted the end of the war. "We experienced that joy, it was a Friday evening. Jubilation broke out all over the country," he said. "We were double excited, celebrating the end of the war and also our marriage."

A sculpture of the kiss was also installed in Times Square for the occasion. In the evening of August 14, 1945, more than two million people are estimated to have gathered in Times Square to hear the news and share in the joy.

Eisenstaedt's photograph was published in Life magazine. He was in so much haste to cover the breaking news that he did not stop to ask the name of the couple.