Authorities said Viktoria Marinova, a 30-year-old, who leaves a small child, died from blows to the head and suffocation and had also been raped. 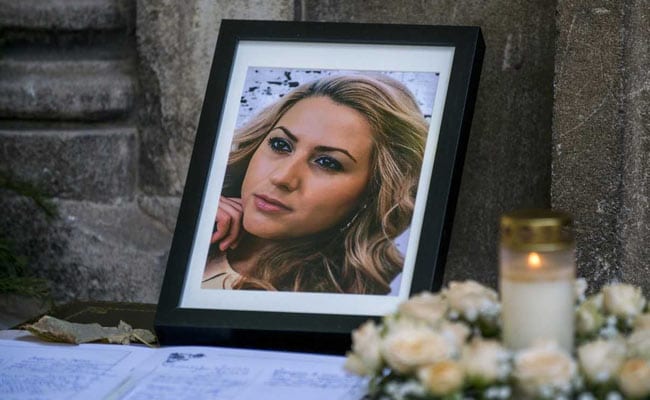 Hundreds of people turned out Friday for the funeral of murdered Bulgarian television journalist, Viktoria Marinova, as authorities said a suspect arrested in Germany would be extradited soon.

In a case that shocked Bulgaria and drew international condemnation, mourners bearing flowers and wreaths flocked to the northern town of Ruse to pay their respects to Marinova, whose body was discovered near a jogging path next to the Danube last Saturday.

Authorities said the 30-year-old -- who leaves a small child -- died from blows to the head and suffocation and had also been raped.

Bulgaria has disputed the immediate assumption by many international bodies and rights groups that the murder was connected with her work.

A 20-year-old Bulgarian suspect, named as Severin Krasimirov, was tracked down and arrested in the northern German town of Stade, near Hamburg, on Tuesday.

A German court said Friday the suspect would "soon" be sent back to Bulgaria and the Bulgarian justice ministry added later that the extradition would take place "next week at the earliest".

According to the German authorities, the suspect had said during questioning "that he did not want to kill the victim and denied raping her".

But he admitted to having "a verbal argument with the victim" and "under the strong influence of alcohol and drugs (he) punched the woman in the face, at which point she fell down. He then picked her up and threw her in a bush but said he then left the scene."

A number of Bulgarian TV channels have broadcast interviews with the suspect's mother, Nadezhda Krasimirova, speaking from her home in the German town of Stade, who said her son had confessed to her the killing and was about to give himself up when he was arrested.

No Proof Of Work-Related Murder

Bulgaria's chief prosecutor, Sotir Tsatsarov, said on Wednesday that "at this stage, we do not have proof to consider that the murder was related to her professional work."

But he insisted that all possible leads were still being pursued.

"The arrest of the perpetrator does not in any way mean that we will discontinue working on all possible hypotheses for a motive," he said.

After a memorial service attended by friends, colleagues and relatives, Marinova was buried Friday in a small private ceremony in Ruse's cemetery.

Marinova -- who presented a current affairs talk programme on the local TVN television channel -- is the third journalist to be murdered in Europe in the past 12 months after Jan Kuciak in Slovakia in February and Daphne Caruana Galizia in Malta in October 2017.

Her last show included interviews with two investigative journalists from Bulgaria and Romania who had been working on allegations of corruption and misuse of EU aid.

Nevertheless, Prime Minister Boyko Borisov has dismissed suggestions of a political motive as a smear campaign.

Bulgaria is regarded as a laggard in the EU in terms of press freedom, ranking 111th out of 180 countries, according to Reporters Without Borders (RSF).

(Except for the headline, this story has not been edited by NDTV staff and is published from a syndicated feed.)
Comments
Viktoria MarinovaBulgaria