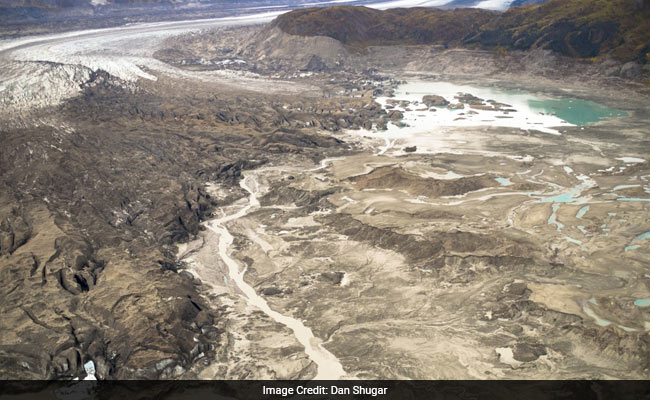 In 2016, this channel allowed the glacier's meltwater to drain in a different direction than normal.

A team of scientists Monday documented what they're describing as the first case of large-scale river reorganization as a result of human-caused climate change.

They found that in mid-2016, the retreat of a very large glacier in Canada's Yukon territory led to the rerouting of its vast stream of meltwater from one river system to another - cutting down flow to the Yukon's largest lake, and channeling freshwater to the Pacific Ocean south of Alaska, rather than to the Bering Sea.

The researchers dubbed the reorganization an act of "rapid river piracy," saying that such events had often occurred in the Earth's geologic past, but never before, to their knowledge, as a sudden present-day event. They also called it "geologically instantaneous."

"The river wasn't what we had seen a few years ago. It was a faded version of its former self," said lead study author Daniel Shugar of the University of Washington, Tacoma of the Slims River, which lost much of its flow due to the glacial change. "It was barely flowing at all. Literally, every day, we could see the water level dropping, we could see sandbars popping out in the river." 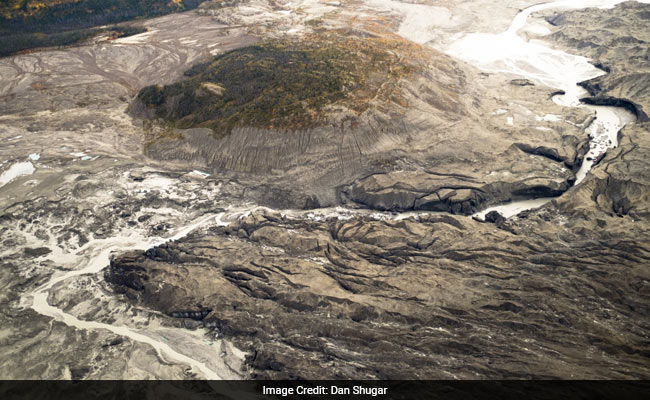 A stream flows through the toe of Kaskawulsh glacier in Canada.

The study was published in Nature Geoscience. Shugar conducted the study with researchers from six different Canadian and U.S. universities.

The study found that the choking of the Slims River in turn deprived Kluane Lake, the largest body of water in the Yukon Territory. The lake level was at a record low last August, and two small communities that live on the lake may now have to adjust to the lower water levels.

"The Kluane lake level dropped last year and is likely to continue dropping," Shugar said. "If it drops enough that the lake level is below its other outlet, at the north end, it becomes what is called a closed basin. That will have changes to the chemistry, the structure of the lake, the biology."

The precipitating event for all of this happened in summer 2016, when meltwater from the retreating Kaskawulsh glacier burst through a channel of ice, suddenly draining a glacial lake that had fed Slims river and directing waters into a different river that ultimately heads south toward the Gulf of Alaska. Previously, these waters had ultimately fed into the vast Yukon river, which empties on Alaska's west coast.

The researchers found only a minuscule probability that the retreat of Kaskawulsh glacier - which retracted by nearly half a mile from 1956 to 2007 - could have occurred in what they called a "constant climate." They therefore inferred that the events in question could be attributed to human-caused climate change.

The beneficiary of the change, in hydrologic terms, is the Alsek River, known for its whitewater rafting. It saw far higher flows than normal as a consequence - and empties eventually into the Gulf of Alaska, which should now be seeing a new infusion of freshwater.

It's important to underscore the scale of the changes this represents: The Kaskawulsh glacier is around three miles wide at its front, or "toe." The river it used to fuel, the Slims River, had a floodplain a mile wide and a flow that ranged from .2 to .4 miles in width. The lake that it fed - Kluane Lake - is 45 miles long and more than 250 feet deep in places. Now, all of this is changing.

These events have occurred in a relatively sparsely populated wilderness area, and so will not have ramifications for large human populations - but they give a sense of just how dramatic and sudden climate-linked changes can be. Similarly, recently mountain glacier changes in the Bolivian Andes have created the risk of dangerous outburst floods that could imperil communities below them.

The current study represents "a great example of a threshold response to warming over the last century-and-a-half," said Ken Tape, an Arctic ecologist at the University of Alaska, Fairbanks, who was not involved in the research. "The glacier has been retreating gradually, but at a threshold encountered in summer 2016, the drainage abruptly changed in a matter of weeks and completely reorganized downstream ecosystems."

Tape cautioned that "most glaciers, when they retreat, do not have downstream consequences as dramatic as in the case presented here. Flows increase or decrease commensurate with glacier mass balance, but rivers are not usually lost or gained in the process, and change is more gradual."

The Kaskawulsh glacier, at only 60 degrees north latitude, is in a relatively temperate region well below the Arctic circle, helping to make it particularly susceptible to climate change. The researchers provided measurements suggesting that just before the river reorganization, the glacier was experiencing quite warm temperatures for the springtime, which seems to have triggered a large burst of meltwater.

Shugar said that the researchers do not expect the glacier and the river system that depends on it to flip back - rather, it has entered a new state.

Promoted
Listen to the latest songs, only on JioSaavn.com
"We did some preliminary estimates of what it would take for the Slims River to be reestablished," said Shugar, "and it seems unlikely to occur in the current climate."