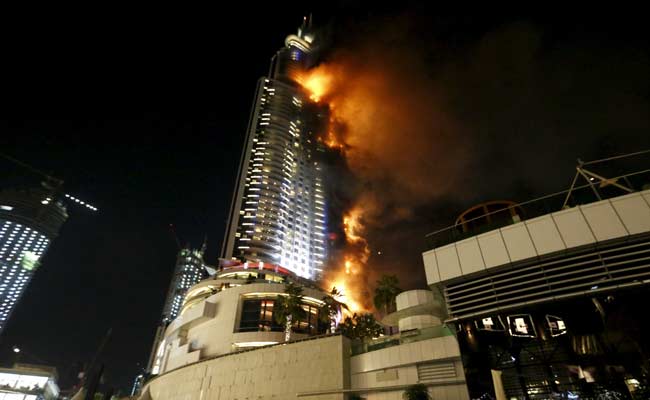 A fire engulfs The Address Hotel in downtown Dubai in the United Arab Emirates on December 31, 2015. (Reuters photo)

Dubai's government media office tweeted that a "fire has been reported in the Address Downtown hotel. Authorities are currently on-site to address the incident swiftly and safely".

Video of the fire raging, slightly earlier this evening #Dubai#AddressFirepic.twitter.com/Mctbi8hBIk

The cause of the blaze was not immediately known.

The 63-storey building, which is close to Burj Khalifa, the world's tallest tower, was engulfed in flames across several floors as sirens wailed and helicopters hovered overhead, witnesses said.

Dubai's police chief said all the hotel's residents had been evacuated from the scene of the blaze, which had still not been extinguished some two hours after it broke out. 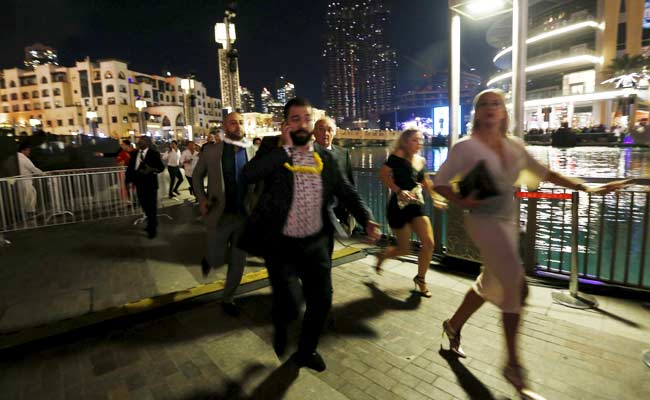 People run away as a fire engulfs the nearby The Address Hotel (not pictured) in downtown Dubai in the United Arab Emirates on December 31, 2015. (Reuters photo)

"All the residents are out," General Khamis Matar al-Mzeima said.

"Until the fire is put out, we will not have information on what caused it," he added.

"At least 14 people have been slightly injured, along with one medium injury, and a heart attack case registered due to people pushing" amid the smoke, the media office tweeted.

Witness Raphael Slama told AFP the fire started at around 9:30 pm (1730 GMT) and rapidly spread upwards across dozens of floors.

The government tweeted that the fire erupted on the 20th floor and affected only the outer facade of the building.

"Four firefighting teams have been deployed" to fight the blaze, it added.

Authorities said earlier Thursday that they had deployed thousands of security personnel to ensure visitors and residents could enjoy the New Year's festivities safely.

The emirate had promised a "spectacular" fireworks display that was set to kick-off at midnight from the Burj Khalifa before spreading to various locations across the city.

A spokeswoman for the government said the planned festivities would go ahead despite the fire.

"New Year's celebrations will proceed according to schedule," Mona al-Marri was quoted by Al-Arabiya as saying, before confirming on her Twitter account.