How Wikipedia wooed and won the world 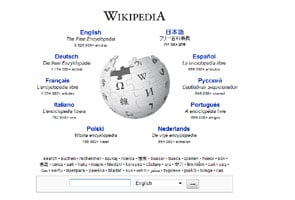 Berlin: An encyclopedia that anybody can help to write - whether a pupil or a professor? Encyclopedia entries which are updated from one minute to the next? And all of that financed by reader donations?

Ten years ago when online companies vanished almost as quickly as they appeared, nobody thought that a reliable encyclopedia could go online - without going bankrupt within a few months.

And yet, Wikipedia went online in January 2001 and not only became a success, it became an indispensable tool for millions of users.

It is the story of success over conventional wisdom.

The two guys who founded the encyclopedia were an unconventional duo to start with. Jimmy Wales, born in 1966, ran the Bomis.com online portal, which got its revenues through men's entertainment such as sport, gossip - and naked babes.

From those revenues, he steered start-up capital to Wikipedia. Otherwise, he gave Larry Sanger a free hand. The two men had become acquainted via online philosophical discussions.

Sanger, a philosopher born in 1968, became editor of Nupedia, from which emerged Wikipedia.

Even Sanger did not believe that thousands of users could write an encyclopedia. Strict standards applied to Nupedia, Wikipedia's predecessor. In principle, anybody could contribute. But they had to be qualified experts in their field. And the editors generally had advanced degrees in those fields, Sanger stressed in those days.

Each entry underwent seven checks - more than with a scientific journal. The first entry - on atonality - was only uploaded after seven long months of preparation. Just over 20 entries were available that first year.

"There must be a way to make it easier for users to participate," Sanger said later.

Wiki software came to the rescue by providing a free-accessible system which allowed the user to access and edit web pages. All that was needed was a browser.

So that the entries would not get mixed into Nupedia, Wales got a separate domain name. Thus, Jan 15, 2001, Wikipedia was born.

It was only supposed to be a test. But within a month, there were already 600 entries, which was more than Nupedia had. Within a year it was 20,000 - to the astonishment of the founders.

Increasingly, Wikipedia entries topped Google search lists for any given subject. Increasingly, people were turning to it for information. It was not always reliable, not always well-written. But it was there, instantly, at the click of a return button.

Conventional encyclopedias could not compete.

By that time, Sanger was no longer editor. He had left Wikipedia in 2002 in a dispute over quality control.

Wales remained - and since then is viewed as sole founder of the encyclopedia. But his company Bomis pulled out.

In 2003 Wales founded the Wikimedia Foundation, moving all intellectual property rights and domain names pertaining to Wikipedia to the new foundation, whose purpose is to establish general policy for the encyclopedia and its sister projects on a donor-funded basis.

The big question then and now is why thousands of authors spend their own time crafting entries which do not bear their own names and which later on may be totally rewritten by someone else - or deleted with a mouse click.

"There is a certain appeal in compiling knowledge without the limitations of copyrights," says Christian Stegbauer, a German sociologist who has written a book on the phenomenon called "Raetsel der Kooperation" (The Riddle of Cooperation).

Wikipedia authors are not so much interested in fame in the conventional sense as they are in achieving a certain degree of renown and respect within the Wikipedia community, says Stegbauer, a professor of empirical social research at the University of Erfurt.