How A Photographer Captured Image Of A Mother, Children Fleeing Tear Gas

The powerful image, which appeared on the websites and front pages of American news organizations, including The Washington Post, has provoked outrage on social media. 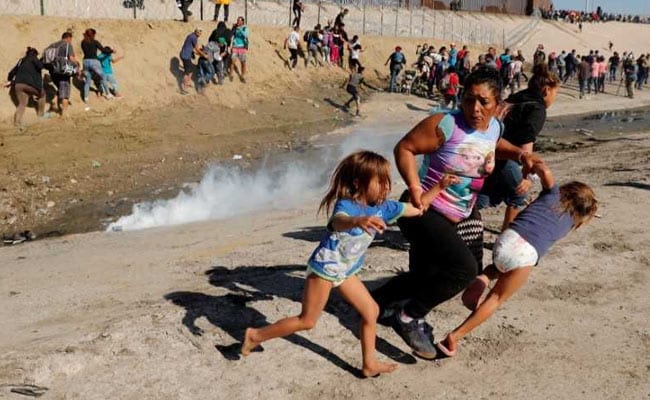 A migrant woman runs away from tear gas with her daughters. (Reuters Photo)

The woman grips her twin daughters, one with each hand, as they run away. One child is barefoot; the other is about to fall. Both wear only T-shirts and diapers.

The woman looks back at the smoke from the tear gas they're trying to escape. Behind them is wire fencing, a partial wall separating them from the United States, and dozens of other migrants, many of them children, also running.

Standing just a few feet away with a mask on, Reuters photojournalist Kim Kyung-Hoon spots the woman, who is hard to miss in her bright purple and blue-green blouse bearing characters from the movie "Frozen." He snaps a picture, capturing the look on her face as she frantically tries to drag her two small children away from the gas as it spreads.

The powerful image, which appeared on the websites and front pages of American news organizations, including The Washington Post, has provoked outrage on social media. The picture contradicts the image of violent migrants that President Donald Trump had conjured on Twitter and at campaign rallies ahead of the midterm elections.

The smoke from the tear-gas canister, the children in diapers, the look of anguish, the wall in the background, that "Frozen" T-shirt ― all encapsulated the chaos of that day, and for Kim, the truth about Central American migrants, whom he had been following for nearly two weeks as they made their way across Mexico and toward the United States to seek asylum. 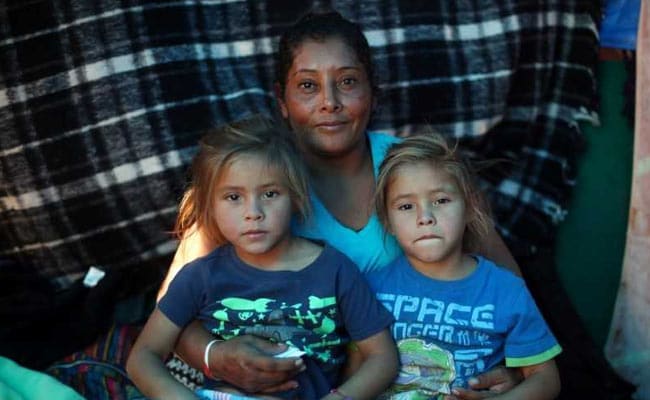 "I think my picture tells the story of what's happening now," he said.

Kim has been following the migrants since he arrived Nov. 14 in Mexico City. He captured images of migrant children sitting inside a bus as they waited for some food in Culiacan, Mexico. He followed migrants at a gas station in Navojoa, Mexico, where they bathed and waited in line for food. And in Mexicali, Mexico, migrants piled like sardines on top of trucks as they traveled east to Tijuana.

The migrants arrived in Tijuana several days ago and had been camped out at a sports complex not far from the U.S. border.

On Sunday morning, some of them began to march toward the San Ysidro border crossing. They carried flags from their country, and banners that said "TRUMP WE HATE YOU NOT" and "MR TRUMP HELP US PLEASE." Kim followed the group, spotting several children and people carrying strollers.

A majority of the group gathered near the border peacefully, while thousands of others did not march and stayed at the sports complex. But a scuffle broke out between Mexican police in riot gear and a couple of dozen protesters, with some running across a dry canal and others trying to cross through different entry points.

Then Kim saw the woman as she started running from the smoke, holding her 5-year-old twin daughters with both hands. Her teenage son was running next to her, Kim said. A Reuters spokeswoman confirmed that the woman had traveled from Honduras to Mexico with all of her five children.

Kim followed the family as they rushed back toward Tijuana, crossing a river and climbing up a concrete barrier. When they got to the top, one of the twins began crying, her tiny face full of anguish as she held on to what looks like a small plastic ball. Kim said the girl was pointing toward her bare feet. She had just lost her slippers.

Kim, who is Korean, does not speak Spanish and said he was able to ask the woman only where they were from. Later, a colleague was able to find the family, which had returned to the sports complex. Reuters learned that the woman had left Honduras to reunite with her children's father, who is in the United States, Kim said.

In an interview with Buzzfeed News, the woman, Maria Meza, 39, said she and her five children were standing near the fence when border agents fired tear gas at them. She said she didn't try to cross and was only looking across the border.

"I was scared. I wanted to cry. That's when I grabbed my daughters and ran," Meza said. "I thought my kids were going to die with me because of the gas we inhaled."

Tokyo-based Kim has been a photojournalist for Reuters for more than 15 years. He has covered natural disasters, and photographing protests isn't new to him; he has done so many times in South Korea and elsewhere in Asia. But covering chaos on the other side of the globe is new.

"This is the first time for me to cover [the] migrant story in Mexico," he said. "I realized . . . we have to tell the truth and tell the story by sharing pictures. I just captured the moment of what is happening there, and then it went viral. It became a chance for more people to think about these migrant issues."

Trump weighed in Monday, calling on Mexico to "move the flag waving Migrants, many of whom are stone cold criminals, back to their countries," and threatening to close the border permanently.

In a statement Monday evening, Homeland Security Secretary Kirstjen Nielsen advised parents to "refrain from attempts to illegally enter our country - these acts will put your children in danger."

The Washington Post reported earlier that Mexico's incoming government had agreed to let migrants stay in that country while their asylum claims are being processed. But officials backtracked after the Post story prompted criticism that they were acceding to pressure from Trump. They denied that an agreement had been reached and said talks with the Trump administration are ongoing.

- The Post's Joshua Partlow, Sarah Kinosian and Nick Miroff contributed to this article.