A photo of three migrant children fleeing tear gas provoked outrage and seemed at odds with US President Donald Trump's portrayal of the caravan migrants as "criminals" and "gang members." 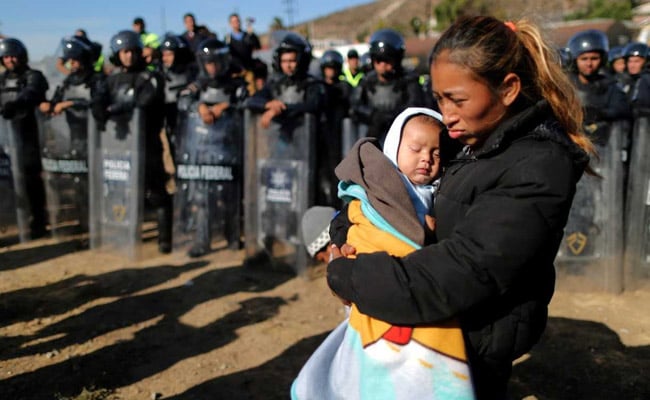 A woman and her child pushed back from the border wall by Mexican police. (Reuters)

A little girl from Honduras stares into the camera, her young features contorted in anguish. She's barefoot, dusty and clad only in a diaper and T-shirt. And she's just had to run from clouds of choking tear gas fired across the border by US agents.

A second photograph, which also circulated widely and rapidly on social media, shows an equally anguished woman frantically trying to drag the same child and a second toddler away from the gas as it spread.

The three were part of a much larger group, perhaps 70 or 80 people, including men, women and children, pictured in a wider angle image fleeing the tear gas. Reuters photographer Kim Kyung-Hoon shot the photos, which provoked outrage and seemed at odds with US President Donald Trump's portrayal of the caravan migrants as "criminals" and "gang members."

Trump administration officials said authorities had to respond with force after hundreds of migrants rushed the border near Tijuana on Sunday, some of them throwing "projectiles" at Customs and Border Protection personnel.

But Democratic leaders, human rights advocates and others focused on the images of the two children in particular. Many pointed to the children left gagging from the gas attack as evidence that Trump's push against a caravan of asylum seekers from Central America had gone too far.

"Shooting tear gas at children is not who we are as Americans," Tom Perez, chairman of the Democratic National Committee, tweeted. "Seeking asylum is not a crime. We must be better than this." 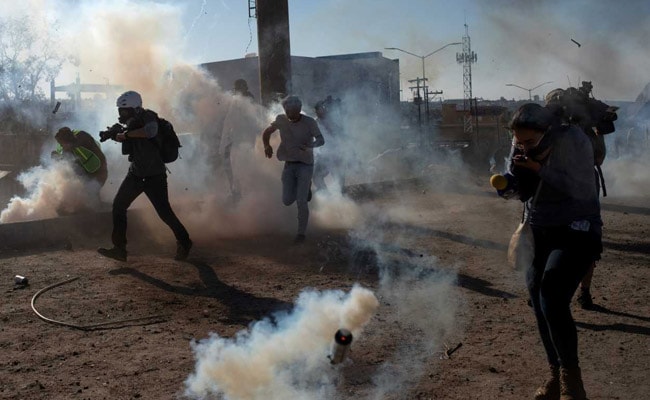 Migrants from Central America hit by tear gas after hundreds tried to cross the Mexico border into the US. (Reuters)

"These children are barefoot. In diapers. Choking on tear gas," he tweeted. "Women and children who left their lives behind - seeking peace and asylum - were met with violence and fear. That's not my America. We're a land of refuge. Of hope. Of freedom. And we will not stand for this."

Others, like incoming Democratic Representative Alexandria Ocasio-Cortez of New York, noted that the families at the border crossing were fleeing violent conditions in Central America and had the right to seek asylum.

Unlike the relatively bipartisan criticism of Trump's now-abandoned "family separation" method of deterring migrants, the initial outrage at the tear gassing of children appeared to come primarily from Democrats and critics of the president.

Some on the right expressed the view that if the migrants could avoid getting tear gassed by not hurling projectiles or by not attempting to cross the border "illegally."

Trump's response in an early morning Tweet on Monday was to call for Mexico to return the migrants to their home countries and to again threaten to "close the border permanently."

That's never been done and experts interviewed by The Post Sunday night knew of no provision explicitly allowing Trump to "close the borders permanently." And since most of the border, with the exception of designated crossings, is already closed it would not likely solve Trump's problems with asylum-seekers who by law, must be allowed to present their claims if in fact they are able to cross the border anywhere.

"This is yet another of several Trump attempts to change what he disparagingly calls the policy of 'catch and release' without or against legal authority," said Yale Law School's Harold Hongju Koh, legal adviser to the State Department during the Obama administration. "All have been blocked. What he does not understand," Koh said in an email, "is that everyone crossing our Southern border is not illegally present. Those with valid asylum claims have a legal right to assert those claims and remain." 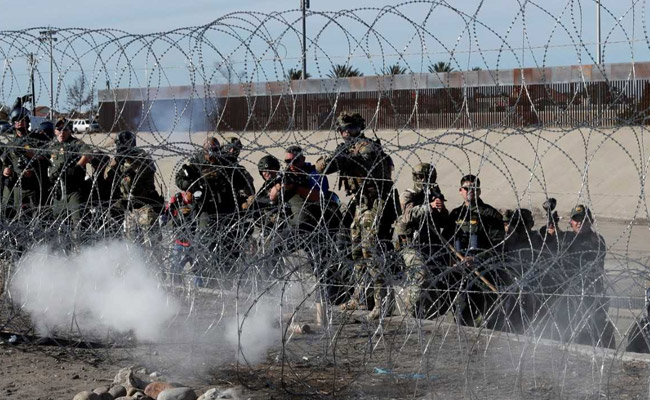 Chaos erupted Sunday around the bustling San Ysidro border crossing, which Homeland Security Secretary Kirstjen Nielsen said was closed "to ensure public safety in response to large numbers of migrants seeking to enter the US illegally."

Had the group made it to the border and presented themselves as asylum seekers, US officials would have been required by federal law to consider their claim before sending them back to Mexico. Indeed, they are required to do so whether the migrants cross at a designated point of entry or anywhere else.

US District Judge Jon S Tigar forcefully reminded Trump of that law last Monday, when he issued a nationwide restraining order against the president's plan to consider asylum requests only from migrants who cross at legal checkpoints. It was Tigar's ruling that prompted Trump to lash out last week against the "Obama judge" and the US Court of Appeals for the 9th Circuit, which in turn brought a rare rebuke from Chief Justice John G. Roberts Jr.

Attempting to stop them short of the border appears just what Trump may be planning.

The Post's Joshua Partlow and Nick Miroff, citing Mexican officials and senior members of President-elect Andres Manuel Lopez Obrador's transition team, reported that the administration is working with the incoming government of Mexico on a plan that would require asylum seekers to wait in that country while their claims moved through US courts.

While Trump hinted at such a possibility in a tweet Saturday, he did not offer any detail. He could try to invoke an exception to the law called "safe third country," which permits the government to keep asylum seekers in another country, in this case Mexico, under a bilateral agreement while their claims are being considered in the US.

There's are several catches to that provision, however, ACLU immigration attorney Lee Gelernt told The Post Sunday night. If and when an agreement is worked out, the law says "there needs to be an assurance that individuals waiting on the Mexican side are safe, not just from the Mexican government but from gangs" and others... We believe it would be impossible for the U.S." to make that assurance, he added.

"Who Gave Them Such Qualification?" China Scolds G7 Over Taiwan Statement