What had begun as a migrant protest of the slow pace of the US asylum claims process devolved into a chaotic scramble in which hundreds made their way to the border hoping to cross onto US soil. 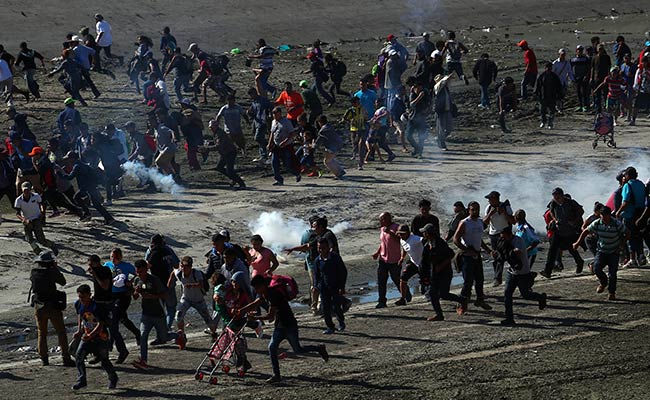 Though the number of people at the border was small, the unrest was a serious escalation of the crisis.

US authorities closed off the busiest port of entry along the US border with Mexico on Sunday and fired tear gas at members of a Central American migrant caravan who had rushed the fencing that separates the countries.

Although the number of people at the border was relatively small, the unrest - with migrants attempting to climb fences and run through car lanes to reach the United States, and scenes of mothers and children choking on tear gas - represented a serious escalation of the crisis.

What had begun Sunday morning as a migrant protest of the slow pace of the US asylum claims process devolved into a chaotic scramble in which hundreds made their way to the border hoping to cross onto US soil. To block that from happening, and as some threw rocks and bottles, Customs and Border Protection (CBP) officers took the rare step of firing tear gas into Mexico as well as closing all legal vehicle and foot traffic to the San Ysidro border crossing, which US officials say normally has about 100,000 visitors per day.

Homeland Security Secretary Kirstjen Nielsen said in a statement that the port of entry was closed "to ensure public safety in response to large numbers of migrants seeking to enter the US illegally."

Some of the migrants tried to breach the border fencing and "sought to harm CBP personnel by throwing projectiles at them," the statement said.

Although the majority of the group approached and gathered at the fence peacefully, Mexico's Interior Ministry said that hundreds tried to cross the border in a "violent manner." Mexican authorities said they would deport anyone who tried to cross illegally.

Before 9 p.m. Eastern time, CBP said the port of entry had reopened.

The statement added that during the day, there were "multiple instances of persons throwing projectiles at CBP personnel" and "multiple confirmed apprehensions" of those who tried to enter the US illegally, as well as "many additional attempts to cross the border illegally."

"There were also assaults against CBP personnel, with multiple US Border Patrol agents hit by rocks," the statement said.

President Donald Trump has repeatedly threatened to close border crossings to prevent the migrant caravan from entering the United States. Although members of the caravan have been in Tijuana for several days, this is the first time that a significant group has massed at the border fence.

The prospect that thousands of Central Americans might have to stay for weeks or months before they can apply for asylum in Mexican border states where drug cartel violence is prevalent has raised concerns about undermining their lawful right to apply for asylum.

The San Ysidro crossing is a large complex with multiple lanes of vehicle and pedestrian access points. In recent days, Mexican authorities and others have worried about the economic effect of the United States closing down such an important crossing for trade and travelers.

Duncan Wood, the director of the Mexico Institute at the Wilson Center in Washington said in a statement that "the closing of the border is a drastic response to a serious incident but it is vital that calm heads prevail."

"Closing a border crossing like [San Ysidro] more than temporarily involves losses of many millions of dollars and severe disruption of commerce and life at the border," he added.

On Sunday night, Sen. Lindsey Graham, R-S.C., tweeted: "I support President Trump's decision to close the border until we can get a handle on the chaos created by the broken laws governing asylum. We must have money for border security/wall and must change asylum laws."

After starting in Honduras and traveling across Mexico, the first members of the caravan began arriving in Tijuana about two weeks ago. In recent days, the group has grown to more than 8,200, with about 7,400 members in the border cities of Tijuana and Mexicali, according to Mexican authorities. Tijuana's mayor declared the situation a humanitarian crisis.

The bulk of the group has been camped out at a sports complex across a highway from the border fence. While a small portion of caravan members were protesting, thousands stayed behind in the sports complex. US border officials have said they have a limited capacity to process asylum seekers, up to 100 per day. Asylum seekers waiting at the border said only 40 per day were being let in on Saturday and Sunday. On Friday, 80 were allowed in.

For the past few days, the migrants planned Sunday's protest to express their frustration about the wait and the conditions where they are living, including painting signs asking Trump to let them in.

"Desperation has led some people to really believe that crossing is possible," said Alex Almendares, 22, a member of the caravan from Colon, Honduras. "The US has given us no response, and the situation at the shelter keeps getting worse."

On Sunday morning, the protest march headed toward one of the pedestrian crossings. Mexican police in riot gear blocked their way, and a scuffle broke out between police and a couple of dozen protesters. After the protesters were rebuffed, the situation grew more chaotic, with some migrants running across a dry canal and others trying to cross in different places.

US authorities fired tear gas that wafted into Mexico and caused migrants to run from the fumes. No serious injuries were immediately reported.

As federal law enforcement officers, Border Patrol agents have broad latitude to use force if they think they are under attack or at risk of injury. An agent in Arizona who fired his service weapon through the border fence in response to rock throwers, killing a 16-year-old boy, was acquitted Wednesday on charges of involuntary manslaughter.

Maria Louisa Caceres, 42, and her son followed people who were running toward the fence.

"We thought it was a peaceful march today, but then I saw everyone running and I thought, 'This is it, God will touch Trump's heart,' " she said.

Caceres, a tortilla vendor from San Pedro Sula, Honduras, said she had fled her hometown and joined the caravan after gang members killed two of her brothers and burned down her house. She said she wants asylum in the United States, but really just "wants life to get better now."

Standing by the fence, when she realized there was no way to cross the border, she said she did not know what would happen next. "Now we wait," she added.

Elizabeth Chirinos, 37, said she had followed others who were running toward the border because she felt desperate.

"The US isn't letting us through and I can't live in those conditions in the shelter," she said. "I want to go to the US and not stay in Mexico, because there are more opportunities."

Standing back from the group by the fence, Almendares said that migrants protesting at the border will not help their cause.

"It just gets people mad at us, and I want asylum," he said.