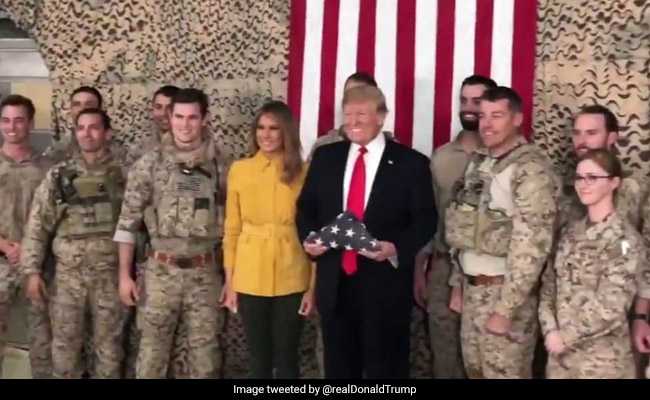 The trip to Iraq was Trump's first one to a combat zone.

A British aviation enthusiast was credited Friday with breaking the news of US President Donald Trump's secret visit to Iraq over Christmas after snapping photos of his plane over northern England.

Alan Meloy, a semi-retired information technology worker from Yorkshire, took the pictures of Air Force One from outside his home with a camera he also uses for bird watching.

He shared the images on his Flickr account, correctly identifying the plane as a VC-25 -- one of two highly customised Boeing 747 jumbo jets used as Air Force One.

Other users noted the location and made the connection with a mysterious US military flight winging across Europe, speculating that it could be on its way to the Middle East.

"It's one of those weird moments when you're right place and right time," Meloy, who lives in the suburbs of the industrial city of Sheffield, told The Guardian newspaper.

"If you want to do covert work use a covert plane," he said.

On his Flickr account, Meloy said: "The internet had worked it out several hours before the White House formally confirmed the visit was taking place".

Rumours about the trip spread quickly on social media long before it was reported by media outlets that were respecting a White House embargo.

During the trip, Trump's first to a combat zone, the US president said the security precautions were unlike anything he had previously experienced.

"If you would have seen what we had to go through in the darkened plane with all windows closed, with no light anywhere -- pitch black," he said.

Meloy added: "Fortunately for us Yorkshire inhabitants he was travelling with the curtains shut and lights out so won't have noticed us looking up at him".

(Except for the headline, this story has not been edited by NDTV staff and is published from a syndicated feed.)
Comments
TrumpTrump Iraq visitIraq