"President Trump put himself before country," he said. "The president welcomed foreign interference in our election in 2016, he demanded it in 2020, and then he got caught."

Trump actions toward Ukraine are at the heart of the impeachment case against him.

House Democrats began to lay the groundwork for articles of impeachment Monday, lambasting President Donald Trump as a danger to the country during a contentious hearing that foreshadowed a party-line vote on charges that could include abuse of power, obstruction of justice and obstruction of Congress.

Over the various and at times disruptive objections of Republicans, Democratic lawmakers marched forward with their public case for impeaching Trump, a process that could reach a pivotal stage later this week with a historic committee vote.

Describing Trump as a "continuing risk to the country," House Judiciary Committee Chairman, Rep. Jerrold Nadler, D-N.Y., forcefully accused the president of using his office to pressure Ukraine to launch political investigations, and then trying to block Congress from investigating him.

"President Trump put himself before country," he said. "The president welcomed foreign interference in our election in 2016, he demanded it in 2020, and then he got caught."

Republicans on the committee sought to vigorously defend Trump, using parliamentary maneuvers, process complaints and occasional theatrics to disrupt the hearing and accuse Democrats of abusing the impeachment process in pursuit of a political vendetta.

"That I think is an abuse of power," said Rep. F. James Sensenbrenner, R-Wis., criticizing Democrats for subpoenaing phone records of some of Trump's associates. "They should be ashamed of themselves. . . . Folks, you have made Joe McCarthy look like a piker with what you've done with the electronic surveillance involved." 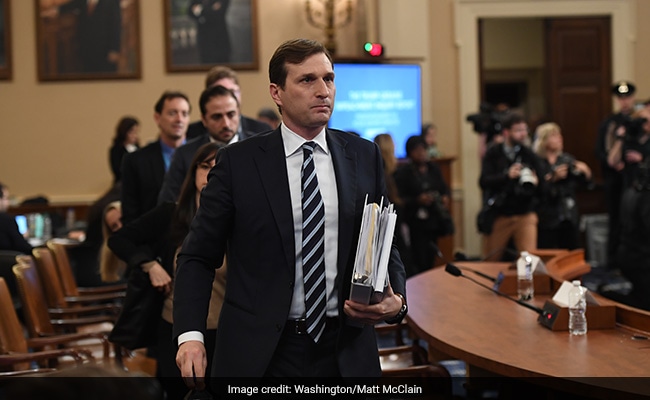 The hearing did not reveal much new information about the underlying conduct at the heart of the impeachment inquiry, instead allowing committee lawyers to summarize the extensive existing evidence and present opposing sides of the case. With dueling staff counsel arguing for and against impeachment - and at one point questioning one another - the hearing showcased how partisan the proceedings had become ahead of a drafting process to outline articles for ousting Trump from office.

The partisan rancor at Monday's hearing belied the growing closed-door cooperation between the two parties on other issues as they negotiate with the White House to complete several major legislative agreements before the end of the year. With pending deals on budget measures, a North American trade agreement and a new paid family leave initiative, Congress faced the prospect of ending 2019 with a rush of bipartisan legislation to go along with a party-line impeachment vote in the House that would be followed by a Senate trial early next year.

As the hearing was taking place Monday, the Justice Department released a report that undercut Trump's attempt to cast himself as a victim of a long-running attempt by establishment figures to delegitimize his presidency.

The long-awaited report by Justice Department Inspector General Michael Horowitz examining the FBI's investigation into Russian interference in the 2016 presidential elections rebutted GOP allegations of illegal spying and political bias in the probe begun ahead of the 2016 election, but found serious faults in other areas. 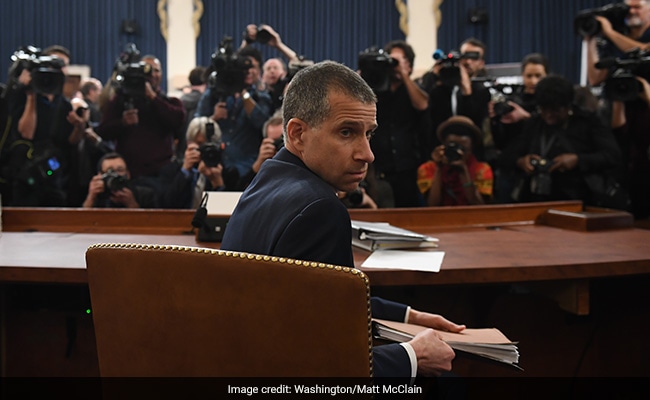 Stephen Castor, lawyer for the Republicans, waits for the start of the House Judiciary Committee hearing

But the report also asserted that some FBI officials played down exculpatory evidence they found about Trump associates as the probe went on and Horowitz was particularly critical of applications the FBI made to the Foreign Intelligence Surveillance Court to monitor former Trump campaign adviser Carter Page. Trump seized on these findings Monday, as he sought to cast both the FBI investigation into his contact with Russia and the House Democrats' Ukraine investigation as part of one overarching plot.

Trump will meet with Secretary of State Mike Pompeo and Foreign Minister Sergey Lavrov of Russia on Tuesday, according to a senior administration official who was not authorized to disclose the meeting. As he faces charges of soliciting Ukraine to meddle in the 2020 election, he will hold talks with the top diplomat of Russia, which intelligence officials say interfered in the 2016 election.

Russian President Vladimir Putin met for the first time with Ukrainian counterpart Volodymyr Zelensky in Paris on Monday to discuss ways to end a military confrontation between the two countries that has cost 13,000 lives. 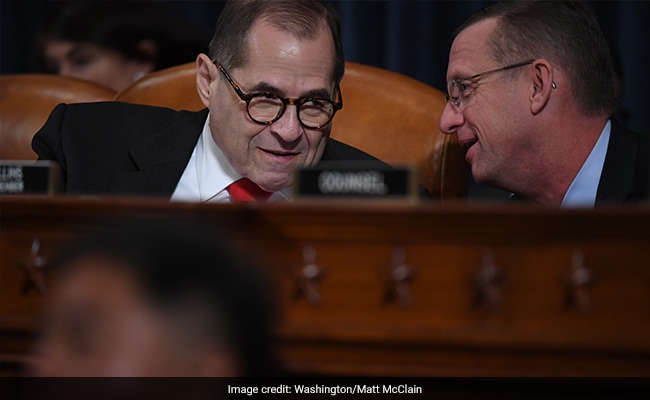 Trump actions toward Ukraine are at the heart of the impeachment case against him.

Democrats allege that Trump withheld a White House meeting and military aid for Ukraine to pressure Zelensky - who wanted to show Moscow the United States stood firmly behind his new administration - to launch an investigation of former vice president Joe Biden and his son Hunter Biden, as well as a probe of an unfounded theory that Kyiv conspired with Democrats to interfere in the 2016 presidential election.

Democrats also contend Trump's directive to restrict top administration officials from testifying before Congress was part of a broader effort to cover up his actions and obstruct congressional oversight.

Trump spent Sunday tweeting and retweeting dozens of times to express his displeasure with the House impeachment process, which he has called a "hoax" and a "sham."

He opted against sending a lawyer or White House representative to the hearing Monday. Democrats argued that Trump failed to mount an aggressive public defense of his conduct because he lacked one.

The hearing allowed both sides to sharpen their arguments ahead of a historic committee vote on whether to send articles of impeachment to the House floor. Democrats are on pace to hold a full House vote before Christmas.

"Such conduct is clearly impeachable," Nadler said of Trump's actions toward Ukraine at the end of the nine-hour hearing. "This committee will proceed accordingly."

Republicans argued throughout the hearing that Trump eventually released the aid to Ukraine without any investigations into Biden, something that occurred after a whistleblower came forward to allege wrongdoing. They said Trump was within his rights to block his top aides from testifying while the courts decide on the issue of executive privilege. 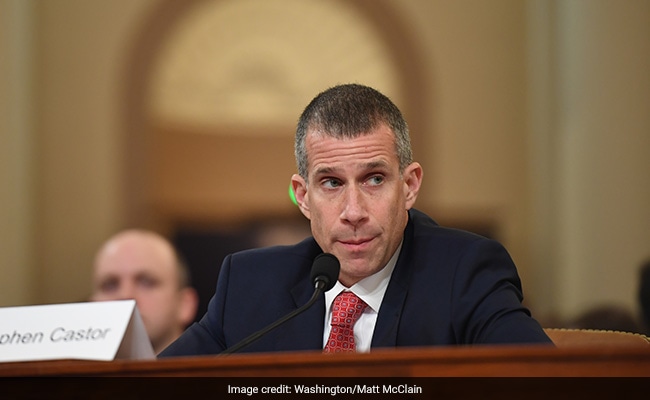 Republicans also sought to undercut the witnesses who did decide to testify publicly, including several Trump administration appointees who provided damning testimony about the president's Ukraine policy.

Several Republican lawmakers openly criticized Gordon Sondland, Trump's ambassador to the European Union, who said last month that there was a "quid pro quo" requiring Ukraine to announce investigations into Democrats before Trump would meet with Zelensky at the White House.

In his opening remarks Monday, GOP lawyer Stephen Castor pointed out more than 600 references to Sondland in the Intelligence Committee report, suggesting that Democrats had leaned heavily on an unreliable witness in making their case.

"Sondland as a witness - he's a bit of an enigma," Castor said, during a lengthy colloquy with another GOP lawyer aimed at casting doubt about one of the few witnesses who spoke directly to Trump. "He stated that he doesn't have notes because he doesn't take notes and he conceded that he doesn't have recollections of a lot of these issues."

Trump has previously quoted from Sondland's testimony to defend himself, saying that he told the ambassador that he wanted "no quid pro quo" from Ukraine.

Well-accustomed to one another's arguments after several weeks of private and public testimony, lawmakers from both parties used Monday's hearing to try to poke holes in the opposing side's case.

Nadler, for example, used his opening remarks to preemptively dismiss a GOP complaint about the fast-moving impeachment timeline.

"As we proceed today, we will hear a great deal about the speed with which the House is addressing the president's actions," he said. "To the members of this Committee, to the members of the House, and to my fellow citizens, I want to be absolutely clear: the integrity of our next election is at stake. Nothing could be more urgent."

He also referenced Trump's personal attorney, Rudy Giuliani, who traveled to Ukraine earlier this month to meet with officials who have peddled unsubstantiated allegations of misconduct by Biden and an unfounded theory that Ukraine, not Russia, interfered in the 2016 election.

Trump said Saturday that Giuliani would be making a report to Attorney General William Barr and to Congress about his findings.

On Monday, Giuliani said he wanted to present the information to congressional Republicans ahead of any impeachment vote.

"I was going to do an outline and present it at the convenience of the Republicans in Congress and the attorney general at the end of this week," Giuliani said during an interview on "War Room: Impeachment," a podcast hosted by former Trump adviser Steve Bannon.

While House Democrats are widely expected to pass articles of impeachment and the GOP-run Senate is unlikely to vote to convict Trump, Giuliani's potential intervention signaled that the process could take more dramatic turns before reaching its final conclusion.

On Monday, Nadler that he would not agree to call witnesses sought by the GOP, including Intelligence Committee Chairman Adam Schiff, D-Calif., and the anonymous whistleblower who tried to reveal Trump's irregular Ukraine policy. In a letter to Rep. Douglas Collins of Georgia, the top Republican on the Judiciary Committee, Nadler noted that the panel already tabled those requests at its meeting last week.

"And I see no reason to reconsider those requests," he said.