The Taiwan bound tanker changed course to transfer 600 tonnes of oil to the North's Sam Jong 2 in international waters off China before returning to the port of Yeosu, the customs service officials said. 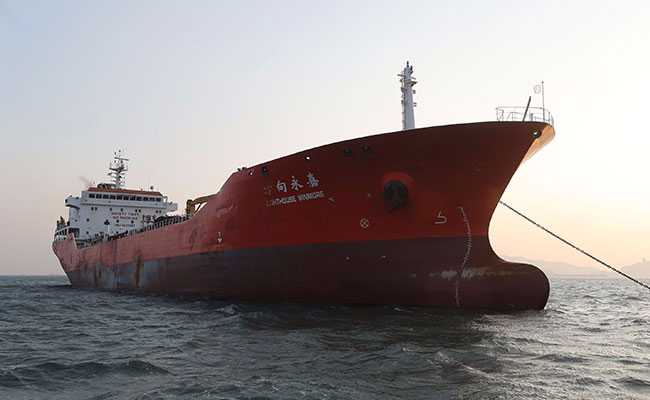 Seoul, South Korea: The crew of a Hong Kong-registered ship have been detained for questioning in South Korea since their tanker was impounded in November for transferring oil to a North Korean vessel and breaching UN sanctions, customs officials said Saturday.

The Lighthouse Winmore, which was chartered by a Taiwanese company, was impounded by South Korean customs authorities at the port of Yeosu on November 24 following an inspection.

"Since then, inspectors have been coming on board and questioning the crew", a Korea Customs Service official told AFP.

The Lighthouse Winmore has 25 crew members including 23 Chinese citizens and two Myanmar nationals, another customs official at Yeosu said. He could not clarify whether they belonged to mainland China or Hong Kong.

The tanker, chartered by Taiwanese company Billions Bunker Group Corp., previously visited Yeosu on October 11 and loaded up on some 14,000 tonnes of Japanese refined oil before heading towards its purported destination in Taiwan.

Instead of going to Taiwan, however, the vessel transferred 600 tonnes of oil to the North's Sam Jong 2 in international waters off China before returning to Yeosu, the customs service officials said.

Earlier a foreign ministry official in Seoul had said the ship had been seized briefly by customs authorities who inspected it.

Results of the investigation will be reported to the UN Security Council's sanctions committee, foreign ministry officials said.

The Lighthouse Winmore is one of 10 ships the US has asked the Security Council to blacklist for violating sanctions against North Korea.

Taipei said the Billions Bunker Group is not incorporated in Taiwan but in the Marshall Islands, and that it would "continue to fully comply" with UN sanctions against North Korea.

Taiwan's transport ministry said it is investigating whether any Taiwanese entities were involved.

The ship is owned by a Hong Kong-registered company called Win More Shipping Limited. There was nobody Friday at the address given for the firm on Hong Kong's companies registry.

Four ships -- three North Korean vessels and a Palau-flagged oil tanker -- were blocked from international ports by the UN Security Council on Thursday over suspicions of carrying or transporting goods banned by sanctions targeting Pyongyang's weapons ambitions, according to the final list adopted by the world body.

Even though the Sam Jong 2 was not among the four banned vessels, it appears on a list of six other ships suspected of transporting illicit cargo, along with the Lighthouse Winmore.

The US had asked the Security Council to blacklist all 10 vessels, but China objected to the proposal, diplomats said, and only agreed to blacklist four ships on Thursday.

The Security Council has imposed three sets of sanctions on North Korea this year: one on August 5 targeting the iron, coal and fishing industries, another set on September 11 aimed at textiles and limiting oil supply, and the most recent on December 22 focused on refined petroleum products.


(Except for the headline, this story has not been edited by NDTV staff and is published from a syndicated feed.)
Comments
Hong Kong oil transfer to North KoreaNorth Korean vesselLighthouse Winmore