Before school started, rows of students and alumni joined hands chanting "Hong Kong people, add oil", a phrase which has become a rallying cry of encouragement for the protest movement. 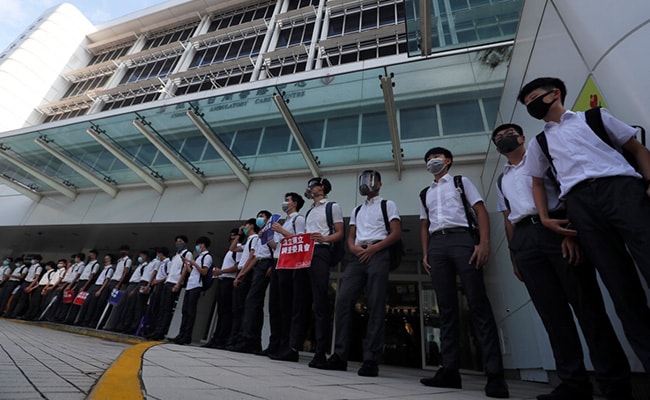 Hundreds of uniformed school students, many wearing masks, formed human chains in districts across Hong Kong on Monday in support of anti-government protesters after another weekend of clashes in the Chinese-ruled city.

Metro stations reopened after some were closed on Sunday amid sometimes violent confrontations, although the mood in the Asian financial hub remained tense.

Early on Monday, before school started, rows of students and alumni joined hands chanting "Hong Kong people, add oil", a phrase which has become a rallying cry of encouragement for the protest movement.

"The school-based human chain is the strongest showcase of how this protest is deep rooted in society, so deep rooted that it enters through the school students," said Alan Leong, an alumnus of Wah Yan College in the city's Kowloon district.

Three months of protests over a now withdrawn extradition bill have evolved into a broader backlash against the government and greater calls for democracy.

The former British colony is facing its first recession in a decade as the protests scare off tourists and bite into retail sales in one of the world's most popular shopping destinations.

Tourist arrivals plunged 40% in August year on year, said Paul Chan, the city's finance secretary, with sustained clashes leading to main roads being shrouded in teargas and blocked, and the international airport shut down - hitting the tourism, retail and hotel industries.

"The most worrying thing is that the road ahead is not easily going to turn any better," Chan said in his blog on Sunday, noting that some hotels had seen room rates plunge up to 70%.

Activists started fires in the street and vandalised a Mass Transit Railway (MTR) station in the main business district of Central on Sunday after thousands rallied peacefully at the U.S. consulate, calling for help in bringing democracy to the special administrative region.

The students, brandishing posters with the protesters' five demands for the government, called on authorities to respond to the promises of freedom, human rights and rule of law.University students were also expected to join the human chain protests during the day on their campuses.

One of the five demands - to formally withdraw the extradition bill - was announced last week by the city government leader, Carrie Lam, but protesters are angry about her failure to call an independent inquiry into accusations of police brutality during demonstrations.

The protesters' other demands include the retraction of the word "riot" to describe demonstrations, the release of all those arrested and the right for Hong Kong people to choose their own leaders.

In a rare public appearance, Lam walked around the central business district with the city's Transport and Housing Secretary Frank Chan and MTR officials to inspect the damaged station, where she chatted with staff and commuters.

Dressed in a black suit, she examined electronic ticketing machines and boarded up windows smashed the previous day, the public broadcaster RTHK showed.

Following the demonstration at the US consulate on Sunday, Hong Kong's government warned foreign lawmakers not to interfere in the city's internal affairs after thousands of protesters called on US President Donald Trump to "liberate" the city.

Hong Kong returned to China in 1997 under a "one country, two systems" formula that guarantees freedoms not enjoyed on the mainland. Many Hong Kong residents fear Beijing is eroding that autonomy.

China denies the accusation of meddling in the city and says Hong Kong is an internal affair. It has denounced the protests, accusing the United States and Britain of fomenting unrest, and warned of the damage to the economy.

Chinese state media on Monday said Hong Kong was an inseparable part of China and any form of secessionism "will be crushed".

The China Daily newspaper said Sunday's rally was proof foreign forces were behind the protests and warned demonstrators should "stop trying the patience of the central government".

Young pro-democracy activist Joshua Wong was released from police custody on Monday after breaching bail conditions following his arrest in August when he was charged along with a number of other prominent activists for inciting and participating in an unauthorised assembly.

A senior US official, speaking on condition of anonymity, said the United States was monitoring events in Hong Kong.

"The freedoms of expression and assembly are core values that we share with the people of Hong Kong, and those freedoms must be vigorously protected. As the president has said, 'They're looking for democracy and I think most people want democracy'," the official said.

(Except for the headline, this story has not been edited by NDTV staff and is published from a syndicated feed.)
Comments
Hong Kong protestsHong Kong school studentsHuman chain