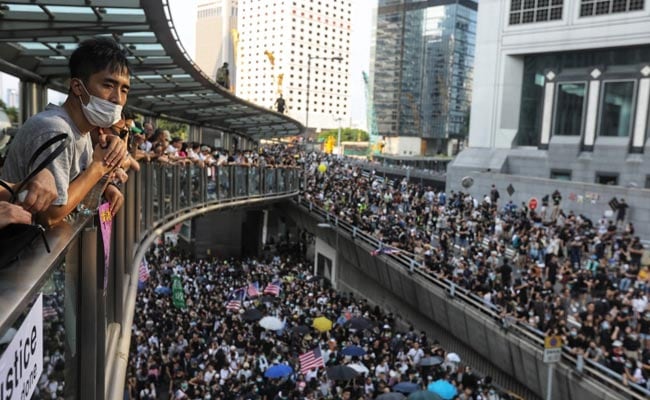 Protesters march from Chater Garden to the US consulate in Hong Kong. (AFP)

Tens of thousands of demonstrators took to Hong Kong streets on Sunday and marched to the US Consulate, urging American lawmakers to pass legislation in support of the territory's democratic aspirations.

The police-sanctioned rally and march through the city center had some of the trappings of a 4th of July parade, as protesters waved American flags and played the Star Spangled Banner. Demonstrators carried red, white and blue signs calling for President Donald Trump to "Liberate Hong Kong" and chanted: "Free Hong Kong, pass the act!"

As has happened in the past with the generally peaceful demonstrations, violence broke out at the end of the day. By early evening, groups of protesters had vandalized a main subway station in central Hong Kong that was closed by police earlier in the day and set a fire around one of its entrances. Demonstrators wearing face masks and helmets smashed station windows leaving glass piled on the sidewalk. They tossed street signs and emptied trash cans down the subway stairwells and began building barricades in the streets.

Later in the night, police fired repeatedly tear gas to disperse protesters in the popular shopping district of Causeway Bay.

The pockets of violence continued two consecutive nights of clashes, despite Hong Kong leader Carrie Lam's decision to withdraw the widely unpopular extradition bill that had originally sparked the months-long political crisis - a clear sign that her concession has been roundly rejected by the majority of pro-democracy protesters.

As dissent in Hong Kong - and the accompanying police crackdown - continues, Lam and her government will have to face the possibility of growing international criticism, particularly from the United States, where lawmakers have now returned from their summer recess.

Authorities have even targeted prominent activists who have not been at the forefront of the recent protests. Former student leader Joshua Wong, who is due to visit the United States soon to testify at a congressional hearing in support of the Hong Kong bill, was arrested at the city's airport while returning from a trip in Taiwan, he said through a legal representative on Sunday evening.

Wong was detained for "breaching bail conditions" following his arrest last month, but said this was because of mistakes on his bail certificate. He said he expected to be released Monday but called his overnight detention "utterly unreasonable."

Organizers handed a petition to a consulate official calling for the swift passage in Congress of the Hong Kong Human Rights and Democracy Act, a bill that has bipartisan backing. This latest protest will likely draw the ire of Beijing, which has already accused the United States of meddling in the months-long political crisis and warned that Hong Kong is an internal Chinese matter. 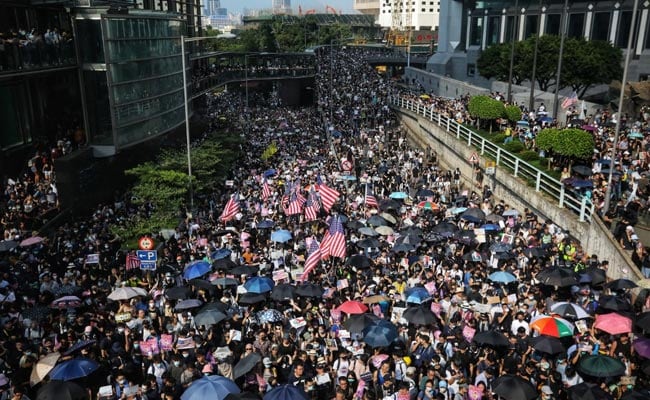 Protesters wave US national flags as they march from Chater Garden to the US consulate in Hong Kong. (AFP)

Members of the Congressional-Executive Commission on China reintroduced the bill in June, days after a million people marched calling for the extradition legislation to be scrapped.

The bill would require an annual review of the special treatment afforded by Washington to Hong Kong under the US Hong Kong Policy Act of 1992. This would include the trade and business privileges Hong Kong enjoys, separate from China. The legislation also calls for asset freezes and denial of entry into the United States for people found to be "suppressing basic freedoms" in Hong Kong.

"The Chinese government is breaking their promises to give freedom and human rights to Hong Kong. We want to use the US to push China to do what they promised over 20 years ago," said a 24-year-old protester who declined to be named. He wore a red "Make America Great Again" hat. "The US government can make China think: Do they really want to lose Hong Kong?"

Lam, Hong Kong's chief executive, suspended the extradition bill in mid-June, but did not fully withdraw it until Wednesday. In the weeks between those actions, the protests expanded in intensity and scope to more broadly focus on Beijing's erosion of the "one country, two systems," framework under which Hong Kong has existed since it was handed back to China in 1997.

In an indication of the growing anti-China flavor of protests, demonstrators on Sunday carried posters and stickers depicting the Chinese flag with its yellow stars rearranged into a swastika.

Swastikas with the term "Chinazi" were also spray painted in the Central district.

Lam's concessions, which also included beefing up the independent police oversight committee, were met with hostility among protesters, who want her to meet the four other demands they have laid out.

Her move to fully withdraw the bill "was a public relations exercise vis-a-vis Beijing and Washington," said Andreas Fulda, the author of a book on efforts at democratization in China and a senior fellow at the University of Nottingham's Asia Research Institute. "Carrie Lam has every reason to be worried about a strong US response" when Congress sits again, he said.

The growing distrust and public animosity toward police was again evident on Sunday after dozens of police stopped and searched protesters on a glitzy stretch of road in the Central district lined with luxury shops. Bystanders jeered at the police, yelling "shame" and cheered when a group of tactical officers left the area.

"They think that this is perhaps a tactical retreat and a way to pacify the movement, but it is so evident that it doesn't address the elephant in the room, which is the militarization of the Hong Kong Police Force," he added.

Earlier Saturday, a second "stress test" was scheduled by demonstrators to disrupt transportation to Hong Kong International Airport but it was thwarted by police. Last weekend protesters caused massive traffic jams and rail delays on lines heading toward the airport. Police stymied Saturday's effort with officers in riot gear stationed at subway stops and ferry terminals as well as boarding buses to check for demonstrators.

"We are in a very urgent situation. We need all the support we can get," said Cody, a 30-year-old IT worker attending the march.

Those who are pushing for a stronger US government response on the situation in Hong Kong say Washington has several options, including tweaking language in the Hong Kong Policy Act in a way that would effectively limit government to government interaction and alter the US economic relationship with Hong Kong.

Conversations have been ongoing between lawmakers and members of foreign relations committees over the summer, as Congress has been in recess, and lawmakers have been watching further developments before deciding on how actively to push the bill when back in session.

US House Speaker Nancy Pelosi, D-Calif, said earlier this week that lawmakers should move to quickly advance the bill. Senate Majority Leader Mitch McConnell, R-Ky, said in an interview Tuesday that he would support legislation to "enhance" the Hong Kong Policy Act he helped to pass in 1992.

The push to pass the law has frustrated pro-establishment lawmakers in Hong Kong.

"Traditionally, these bills targeting specific countries, they are developing countries, with dictators in those countries," said Felix Chung, a pro-Beijing lawmaker who traveled as part of a delegation of Hong Kong lawmakers last month to Montana to meet with congressmen and senators.

"But Hong Kong has been so close to the US, economically and socially, it has never been a target of the US government, so why should they use such a particular bill to punish Hong Kong?" he added.

While leaders from both parties have been vocal in their support of Hong Kong's protesters, Trump has taken a largely hands-off response to the upheaval. Last month, he said Chinese President Xi Jinping could "quickly and humanely solve the Hong Kong problem." Previously, he described protesters as "riots," a term used by Hong Kong authorities and a characterization protesters are fighting to have withdrawn as one of their demands.

Kurt Tong, who served as US Consul General in Hong Kong until this summer, said during a speech in Washington in late July that Hong Kong was treated as a "second-tier" issue by the administration, which put more focus on Iran, North Korea and the trade war with China.