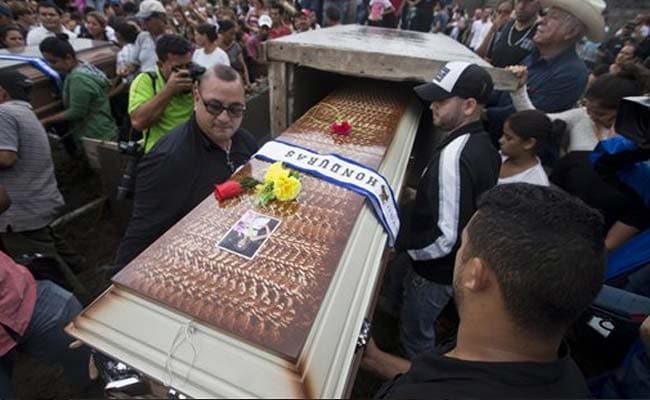 Relatives and friends carry the coffin of the Maria Jose Alvarado, 19, during her burial in Santa Barbara. (Associated Press)

Santa Barbara, Honduras: A shaken Honduras buried its Miss World contestant and her sister on Thursday, after the latter's boyfriend shot them in a jealous rage, according to police and media reports.

Mourners sobbed as coffins holding the remains of Miss Honduras, 19-year-old Maria Jose Alvarado, and her sister Sofia Trinidad Alvarado, 23, were lowered into the ground at a cemetery in the northwestern town of Santa Barbara.

The violence-plagued Central American nation has been in shock since police found the sisters' bodies buried along the banks of the Aguagual River on Wednesday and accused Sofia's boyfriend Plutarco Ruiz of killing them the night they went missing a week ago.

Maria Jose, who won the Miss Honduras crown in April, had been due to fly to London on Wednesday to compete in the Miss World pageant.

After forensic analysts in Tegucigalpa examined the sisters' bodies overnight, authorities returned them for a morning funeral service in Santa Barbara, some 200 kilometers (120 miles) from the capital.

Mourners held a dawn vigil for the women on Thursday under a white tent outside the family's house.

Under a drizzling rain, a funeral procession then accompanied the caskets to the San Juan Bautista cemetery, where the sisters were buried alongside their father, Oscar.

Their mother, Teresa Munoz, bent over Maria Jose's coffin and broke down in tears.

"It's unspeakable what they did to my granddaughters," said Sotera Munoz, the sisters' 86-year-old grandmother.

"That young man had a sick mind," she told AFP, referring to Ruiz.

According to Honduran media reports, police believe Ruiz, who held a birthday party last Thursday at a resort outside Santa Barbara, flew into a fit of rage when he saw Sofia dancing with another man.

He allegedly shot her in the head and then her beauty queen sister twice in the back.

Police arrested Ruiz and an alleged accomplice, Aris Maldonado, on Tuesday, while the owner of the resort Ventura Diaz and his wife Elizabeth Alvarado were arrested the next day.

All four were sent to jail on Thursday.

Honduran Security Minister Arturo Corrales said a disagreement between Ruiz and Maria Jose "was the trigger for the first shot that set off a series of violent events" at the party.

Police said they seized a Colt-45 pistol and two vehicles, including a white pick-up truck allegedly used to transport the sisters' bodies some 20 kilometers from the resort to the spot where they were buried.

Flanked by a heavy police contingent, 32-year-old Ruiz appeared Thursday in a Santa Barbara courthouse for an initial hearing as a suspect in the crime.

"We're interrogating the suspects to see if there were more people involved in trying to cover up the crime," police spokesman Jose Coello told AFP.

Officials have accused Ruiz of taking his pick-up to a garage after burying the sisters and having it cleaned and repainted.

Maria Jose, who turned heads with her gleaming smile and wavy chestnut hair, was in her last year of university at the Northern Polytechnic Institute, where she studied computer science.

She had participated in beauty contests since she was a young girl.

She was also known in Honduras for her work as a model on popular TV game show "X-0."

Organizers of the Miss World pageant, which begins Saturday, said they were "devastated" by the loss of "two young women who were so full of life."

They have announced a tribute on Sunday in honor of the slain sisters, and said they planned to donate money to a children's home in Honduras in their memory.

Promoted
Listen to the latest songs, only on JioSaavn.com
Honduras, a poor country of eight million people, has the world's highest homicide rate, at 90.4 per 100,000 inhabitants in 2012.