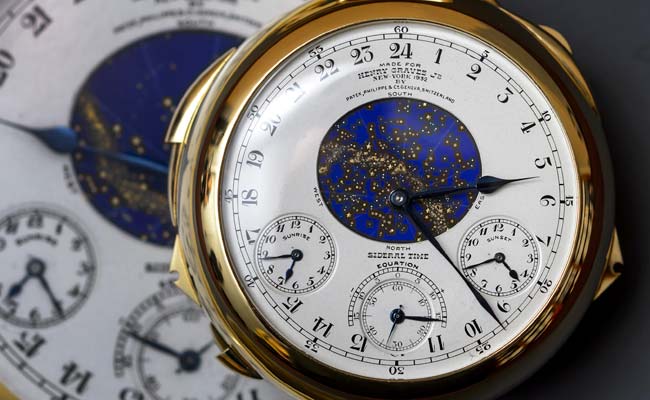 Timepiece watch made by Swiss watchmaker Patek Philippe in 1932 at the Sotheby's auction house in Geneva. (Agence France-Presse)

Geneva: A brooch commissioned by a French empress, or perhaps an iconic watch considered the most complicated ever made entirely by hand?

The list of spectacular pieces on sale at Christie's and Sotheby's traditional autumn jewel and watch auctions in Geneva this week is long, with nearly $200 million expected to change hands.

Wealthy collectors from around the world have descended on the Swiss city for four action-packed days at the two competing auction houses.

Christie's kicked off the bidding frenzy on Sunday with a special auction to mark 175 years of Patek Philippe watches, which saw 100 wrist and pocket watches go under the hammer for a total of $19,731,099.

That was double the original estimate, and set nine world records in the process, said Christie's, which raked in another $15 million on a second round of watch sales on Monday evening.

Most exciting on the watch scene this week though is another Patek Philippe creation billed as the most famous and expensive watch in the world, set to go under the hammer at Sotheby's on Tuesday.

The auction house hopes to pocket a smooth $15 million for the celebrated timepiece known as the "Henry Graves Supercomplication" after its original owner, a New York banker who ordered it in 1925.

Weighing in at more than half a kilo, the gold open-face chronograph is comprised of 900 separate hand-crafted parts that took Patek Philippe five years to piece together.

"This is not a watch you can wear. It is a watch that symbolises strength, power and money," a watch industry expert told AFP.

It displays not only the hour but also a plethora of other indicators: a perpetual calendar, the phases of the moon, sidereal time, indications for the time of sunset and sunrise, and the shifting night sky over Manhattan.

The watch has been on the block once before, at a Sotheby's auction in New York in December 1999, when the Time Museum in Rockford, Illinois closed its doors and emptied its inventory.

That time, the exquisite timepiece went for $11 million.

The auction houses are also both hosting their traditional Magnificent Jewel sales this week, with Christie's headlining its sale on Tuesday with a piece drawn from the French Crown jewels.

The mythical diamond-decked "Feuilles de Groseillier" brooch was commissioned by Empress Eugenie in 1855 and was created by French jeweller Alfred Bapst.

The piece, valued at $2-3 million had not been seen at auction in 125 years, Christie's said, stressing that it was "extremely rare for a jewel of such historic importance to be offered for sale."

Sotheby's is also presenting a bit of royal history at its competing auction on Wednesday, offering up a stunning pearl necklace that once belonged to Josephine de Beauharnais (1807-1876), who became queen of Sweden and Norway.

Sotheby's jewel chief David Bennet suggested the pearls, expected to fetch up to $1.5 million, may even have been handed down by the queen's grandmother and namesake, the first wife of Napoleon Bonaparte.

"It may well be that these pearls were originally in her collection as well," Mr Bennet told AFP.

Sotheby's will also be offering several pieces from the Dimitri Mavrommatis collection of precious stones and avant-garde jewellery, led by the "Graff Ruby".

Promoted
Listen to the latest songs, only on JioSaavn.com
The glimmering 8.62-carat blood-red rock, mounted on a ring, was acquired by Graff in 2006 for $3.6 million and later sold to Dimitri Mavrommatis for an undisclosed sum.