The nearly unthinkable temperatures caused airline gas lines to freeze and electrical grids to collapse, and they kept much of the northern United States homebound. 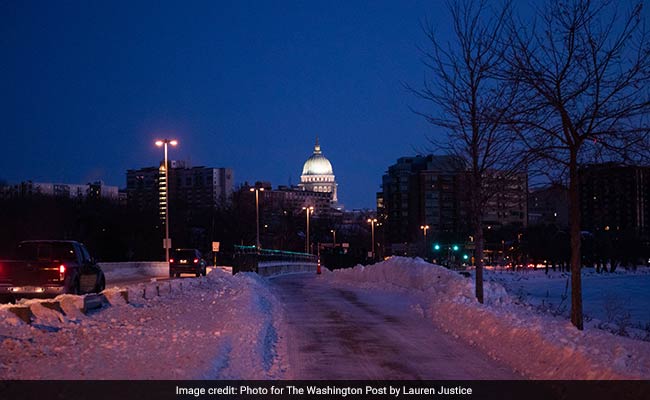 Millions across the Midwest experienced a freeze normally reserved for the Arctic Circle on Wednesday as temperatures dropped to nearly 50 degrees below zero. The frightful cold, expected to bottom out with record lows Thursday morning, was blamed for several deaths across the region, and fears for the most vulnerable populations soared as night fell.

The nearly unthinkable temperatures caused airline gas lines to freeze and electrical grids to collapse, and they kept much of the northern United States homebound. Power outages roiled swaths of Wisconsin and Iowa, plunging thousands into a brief, unheated darkness. The dry, frigid air froze exposed water instantly, led to spontaneous nosebleeds, and made even brief forays outdoors extremely hazardous.

Officials in Michigan, Wisconsin and Minnesota had linked six deaths to the weather as of Wednesday night, including several people who probably froze to death. Governors in Wisconsin and Michigan declared states of emergency and ordered all state government offices closed; some state agencies in Illinois were closed Wednesday, as well. 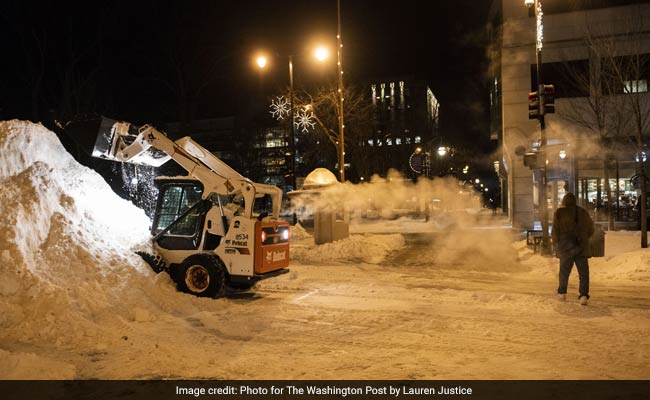 Snow is cleared in the streets of downtown Madison, Wis. in the early morning.

"I am urging people to prepare for this severe weather and to exercise caution when traveling or going outdoors," Wisconsin Gov. Tony Evers said.

The capitol building here, where people sought shelter during business hours, remained open as the temperatures outside plunged to minus-24; the estimated wind chill made it feel like minus-48 degrees.

It was colder than Alaska's North Slope in many places, including Norris Camp, Minn., where temperatures dropped to minus-48 degrees Wednesday morning - with the wind chill pegged at minus-65 - making the town the coldest reporting location in the United States and one of the coldest spots on Earth.

Even Hell, Michigan, froze over. The community outside of Ann Arbor was expected to see temperatures drop to minus-26 overnight into Thursday. The nearby University of Michigan took the rare step of canceling classes through Thursday. 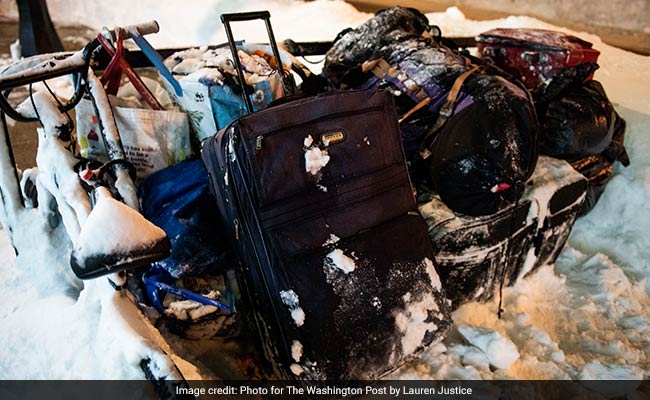 Belongings are left at a bike rack outside the Madison Public Library in Madison, Wis.

From Minnesota to Michigan, the polar vortex brought with it a slew of school closures, mail service interruptions and more than 1,000 airline flight cancellations. Scores of restaurants, grocery stores and coffee shops shuttered for the day or shortened business hours. In Chicago, "Disney on Ice" and the musical "Hamilton" were among many to go dark; in this weather, the show could not go on.

For the region's most vulnerable - even those hardened to the Upper Midwest's long winters - this polar vortex has been especially perilous.

Karen Andro, director of Hope's Home Ministries at the First United Methodist Church in Madison, has spent much of the past few days coordinating with other nonprofits and government agencies to arrange transportation, hot meals and warming centers for the city's homeless residents. She reflected on past winters, when one person froze to death on the steps of a local church and another had a heart attack walking between shelters, and said that services here have improved.

"The cold exacerbates everything," Andro said, noting that homeless people with mental illness, disabilities and health problems are at extreme risk.

Early Wednesday morning, there remained a small but dangerous gap in service. An hour before sunrise, dozens of men, bundled up and carrying their belongings in grocery bags and suitcases, ventured into the frigid morning air. It was minus-24 degrees, and winds made it feel like minus-48.

They had spent the night in two shelters that required them to leave by 5:30 a.m., forcing them to traipse through an ice-slicked downtown, past the Wisconsin state capitol building, to the headquarters of the Porchlight Men's Shelter. There they would be served breakfast before relocating again to other city shelters.

"They should take a bus and pull it up right here," said Randy George Friesen, 66, who carried two bags for six blocks to reach the Porchlight headquarters. His glasses were frosted over, his snow-white beard was frozen, and he had used scarves to tie a blue blanket around his wide shoulders.

Friesen said he didn't understand why there wasn't a shuttle between the two buildings.

"That will never happen," said Murrel Swift, 48, who also made the journey between shelters. Tiny white crystals had accumulated on his thick eyelashes. 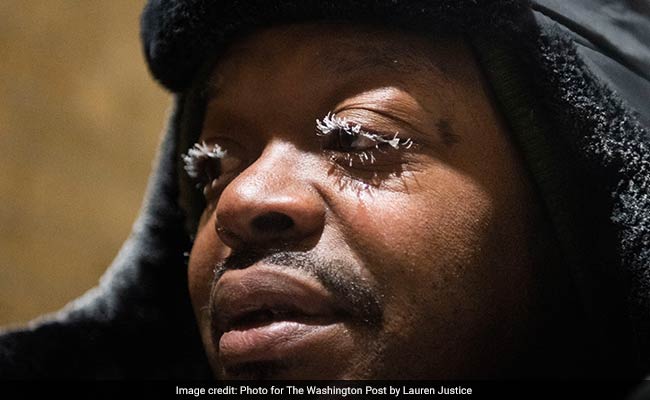 Murrel Swift, 48, walks from one shelter to another in downtown Madison, Wis. early morning as temperatures reach -49 with wind chill

Inside the shelter, night manager Maurice Robinson was rattled. One guest had attacked another with a bike lock, prompting the police, fire department and EMS to descend upon Porchlight. On nights like Tuesday, when the cold is life-threatening, the city's shelters do not turn away anyone - even if an individual has been previously banned for bad behavior or intoxication.

Porchlight was more crowded than usual, and Robinson had to place people on mats along a hallway wall. At least eight men streamed in hours after the scheduled check-in time - at 1:09 a.m., 2:22 a.m., 2:37 a.m.

"The cold brings a lot of people in," Robinson said.

Even some Midwestern homes were not cold-proofed refuges for hardened residents.

Brian Wallheimer, a science writer for Purdue University, corralled his three young children at home in Rockford, Illinois, after schools closed their doors Wednesday. The freezing air infiltrated his-two story home northwest of Chicago, he said, and frost has accumulated on the window sills and door hinges.

"I've never seen that happen," Wallheimer, 39, said, as his children - 9, 6 and 4 years old - hatched plans to build a blanket fort in the basement.

In addition to grade school and university closures throughout the Midwest, districts and colleges from Pittsburgh to Buffalo also canceled classes because of extreme weather. 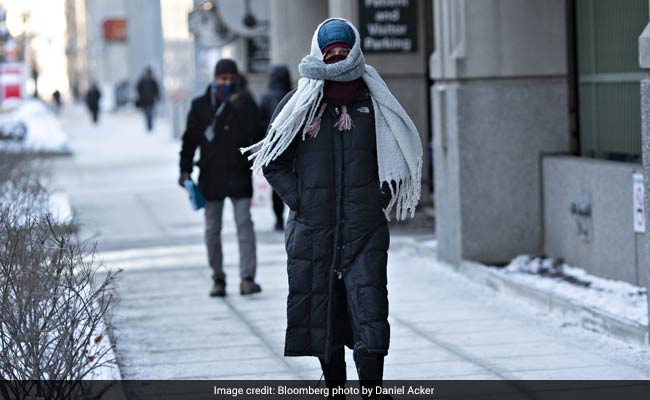 A pedestrian walks in downtown Chicago on Wednesday

Wind chill estimates plummeted to minus-50 in the Dakotas and northern Minnesota on Wednesday. The Arctic air will loosen its grip on the Midwest by Thursday afternoon; temperatures might even approach zero degrees in Chicago and Milwaukee. By the weekend, daytime temperatures will be above freezing across most of the Midwest.

As Chicago neared record lows ahead of the expected thaw, the Chicago area's Metra commuter rail suspended some train service after extreme temperatures caused wiring problems. Some Chicago Transit Authority buses were being turned into mobile warming shelters for the homeless, the Associated Press reported, while Lyft said it would offer free rides to warming centers in the city, as well as in the Twin Cities, Madison, Milwaukee and Detroit.

In Rochester, Minnesota, where temperatures dropped to minus-27 degrees Wednesday, all municipal transit services were suspended after buses began experiencing mechanical difficulties. Xcel Energy asked Minnesota customers to lower their thermostats to 63 degrees until Thursday morning, "if possible," to help "ensure that all of our customers continue to have gas service during this bitterly cold weather." 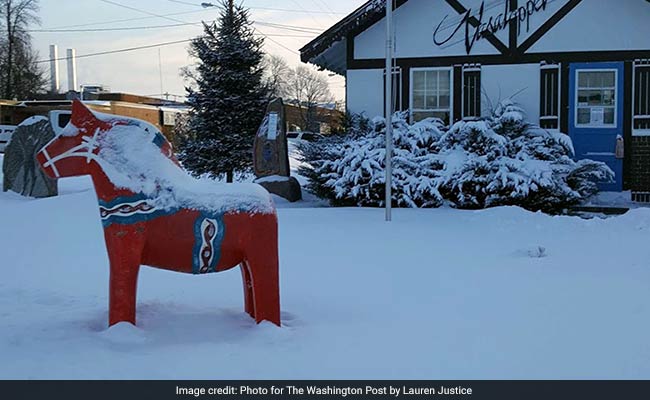 Snow covers a Dala horse as the sun rises on a sub-zero morning outside the Vasaloppet ski headquarters in Mora, Minn

As many as 13,500 customers experienced power outages in Wisconsin and Iowa by midday Wednesday, according to utility company outage maps. Workers scrambled to restore electricity in a race to keep homes and businesses warm in the dangerous cold.

Most outages were resolved in a matter of hours.

Nine hundred We Energies customers were without power for about an hour and a half on Wednesday afternoon in West Allis, Wisconsin, after neighbors on a residential street heard a transformer bang and saw a spark immediately before the lights went out.

They closed their curtains to keep cold air from leaking in around window panes and opened cabinet doors to prevent pipes from freezing.

"I was amazed how fast they got it back," said Dan Bark, whose house sits diagonally across from the damaged power lines. "We were trying to figure out contingency plans."

He pondered taking his family and cats to his mother's home nearby. Bark has a generator, but it was in the garage - and frozen. He conceded that was not ideal, but he also had never seen the temperatures dip quite so low.

"This is the coldest it's ever been," Bark said.

(Except for the headline, this story has not been edited by NDTV staff and is published from a syndicated feed.)
Comments
Snow freeze USArctic CircleUS Snow Storm