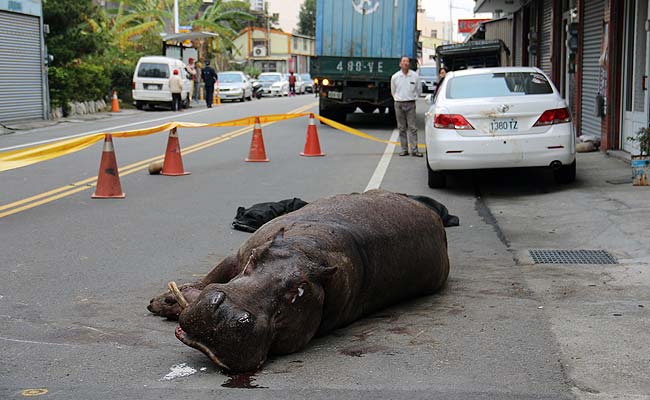 An injured hippo lies on the ground after it jumped from a truck in Miaoli county on December 26, 2014. (Agence France-Presse)

Taipei: A hippo that panicked while being transported by truck in Taiwan jumped from the vehicle, breaking a leg and causing confused residents to report spotting a dinosaur on the loose.

Television footage showed the enormous animal lying on the road with a white fluid oozing from its eyes after it jumped through a truck window and landed on a parked car before falling onto the road on Friday.

The sound of the collision startled people nearby who flocked to see the animal and contacted the police in central Miaoli county.

One woman was quoted by the United Daily News as saying that she ran out of her house after hearing the crash and thought she saw "a dinosaur" lying on the road.

The truck driver was quoted by the newspaper as saying that he saw the hippo "flying out" of the vehicle after getting spooked during the drive.

The injured animal, named "A Ho" after the Chinese name for hippo Ho Ma, lay on the road for a few hours before being put into a cargo container and taken back to its farm in central Taichung city, officials said.

Promoted
Listen to the latest songs, only on JioSaavn.com
Taiwanese authorities said today that the animal's owner could face a fine of up to Tw$75,000 (US$2,400) for violating animal protection laws after the hippo suffered a broken leg and damage to its teeth.

Local media said the hippo was a star attraction at its farm and had even appeared in a popular television soap opera several years ago.
Comments
HippoHippo in TaiwanHippo jumps from moving truckHo MaTaiwan Hippo injured