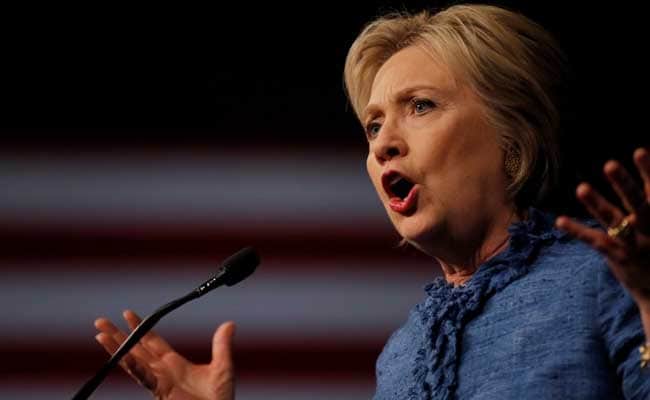 Hillary Clinton pointed to her experience as secretary of state as a measure of her ability to influence Beijing.

The eastern US state, where organized labor is an influential force, hosts its presidential primaries on April 26.

"China illegally dumps cheap products in our markets, steals our trade secrets, plays games with their currency, gives unfair advantages to state-owned-enterprises and discriminates against American companies," she said.

"We will throw the book at China for their illegal actions."

Clinton's remarks, delivered to a state AFL-CIO union convention in Philadelphia, were among her most forceful campaign trail comments about Beijing.

Her rival for the Democratic nomination, Senator Bernie Sanders, addresses the gathering today.

Clinton, seeking to regain her footing in the nomination race after losing six of the last seven state contests, pointed to her experience as secretary of state as a measure of her ability to influence Beijing.

"I've gone toe to toe with China's top leaders on some of the toughest issues we face, from cyber attacks to human rights to climate change to trade and more," she said.

"I know how they operate, and they know if I'm president, they're going to have to toe the line, because we're going to once and for all get fair treatment, or they're not going to get access to our markets."

At one point she refered to China as "the biggest abuser of global trade."

Clinton defeated Barack Obama in Pennsylvania in their 2008 primary battle, thanks to support from union Democrats, and she aims to repeat her victory in three weeks' time.

But she will need to reassure workers who have criticized her late opposition to the trans-Pacific trade deal recently signed by President Barack Obama. Sanders has steadfastly opposed the agreement from Day One.

"My message to every worker in Pennsylvania, every worker across America is this: I will stand with you, I will have your back and I will stop dead in its tracks any trade deal that hurts America," Clinton said.

She also criticized Sanders, insisting that "in a number of important areas, he doesn't have a plan at all."

Clinton leads Sanders by 52.7 per cent to 35 per cent in a RealClearPolitics poll average, although the latest poll, released by Quinnipiac University on Tuesday, puts Clinton just six points ahead.

She is well ahead in the nominations race, but she has suffered stinging defeats for two weeks.

A win in the New York primary April 19 is seen as crucial for her preventing Sanders from snatching the nomination.

But the self-described democratic socialist from Vermont is popular with the rank and file.

"I don't think she's a bad person, and if she wins the nomination I'll vote for her," said Don Long, 39, a union telecommunications worker.

But considering "somebody who is as solidly behind organized labor as Bernie Sanders is," Long added, "you got to go with Bernie Sanders."
Comments
Hillary ClintonUS Presidential Elections