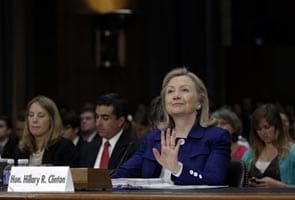 Kabul: Setting the stage for a high-level diplomatic showdown, US Secretary of State Hillary Rodham Clinton bluntly warned Pakistan's leaders on Thursday that they would face serious consequences if they continued to tolerate safe havens for extremist organisations that have crossed the border to attack Americans and Afghans.

"There's no place to go any longer," Mrs. Clinton said, referring to Pakistan's leadership, in some of the Obama administration's most pointed language to date. "The terrorists are on both sides" of the border between Afghanistan and Pakistan. "They are killing both peoples," she said.

"No one should be in any way mistaken about allowing this to continue without paying a very big price," Mrs. Clinton said before leaving for Pakistan for what is certain to be a tense visit by an unusually powerful American delegation sent to demand greater Pakistani cooperation in fighting Al Qaeda and other extremists groups.

Mrs. Clinton will be joined by the new chairman of the Joint Chiefs of Staff, Gen. Martin E. Dempsey, and the new director of the Central Intelligence Agency, David H. Petraeus, who stepped down as the senior military commander in Afghanistan this year.

Senior administration officials have described the delegation as an effort by the administration to display a united front to a Pakistani government that appears increasingly suspicious toward - if not openly hostile to - American policies in Afghanistan and Pakistan. While those officials suggested that they hoped to persuade the Pakistanis to cooperate, Mrs. Clinton's remarks here in Afghanistan's capital suggested the delegation would deliver a much sharper warning as well.

Her remarks underscored the fact that the war in Afghanistan - along with the hopes for a smooth American withdrawal by 2014 - has become fully intertwined with Pakistan's own insurgents, some of whom have the support of the country's security services.

That has brought the relationship with Pakistan to a new low following a year of tensions - from the arrest of a C.I.A. officer, to the secret raid that killed Osama bin Laden in Pakistan in May, to the attack on the American Embassy here last month, which General Dempsey's predecessor, Adm. Mike Mullen, blamed on elements within Pakistan's top spy agency, Inter-Services Intelligence.

Mrs. Clinton, appearing with Afghanistan's president, Hamid Karzai, said that Pakistan could "either be helping or hindering" efforts to find both a military and a political resolution to the war here. It is now, she said, "a time for clarity."

"We will be delivering a very clear message to the government of Pakistan and to the people of Pakistan because they too have suffered," she said, beneath a canopy of trees at the presidential palace here. "They have suffered at the hand of the same kind of terrorists. So there should be no support and no safe haven anywhere for people who kill innocent men, women and children."

Mr. Karzai, who has repeatedly accused Pakistan of interference in Afghanistan, echoed her remarks, saying that Pakistan has long harbored enemies of his government, including the Taliban, whose leadership fled there after the American invasion in 2001.

While the Obama administration has pressed Afghanistan to seek reconciliation with some elements of the Taliban, Mr. Karzai said on Thursday that that would not be possible without the positive involvement of Pakistan.

Tentative and still-fruitless efforts to lure the Taliban into a peace process were dealt a severe setback when a man purporting to be a peace envoy killed Burhanuddin Rabbani, the leader of Afghanistan's High Peace Council and a former president, using a bomb hidden in his turban.

The assassination, shortly after a carefully planned attack on the American Embassy last month, raised doubts about how many, if any, members of the Taliban are interested in a peace agreement.

Mrs. Clinton met Mr. Rabbani's son, Salahuddin, at a meeting with Afghan lawmakers, officials and advocates at the American Embassy here on Thursday morning, expressing her condolences even as she encouraged a continuation of the efforts he began. "He was a brave man, trying to do the right thing," she told him.

"We will make sure we continue his vision," Mr. Rabbani replied.
Comments
Clinton's warning to PakHillary Clinton