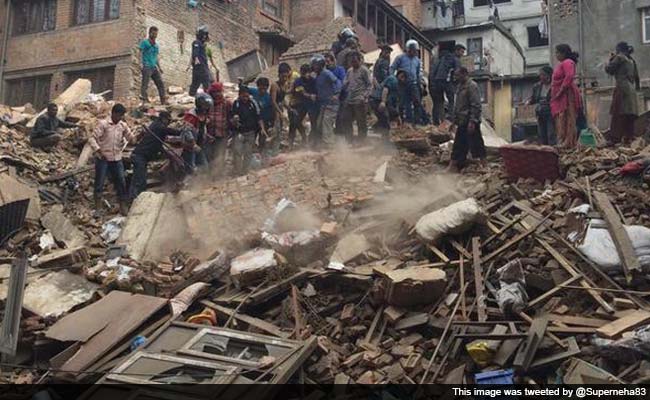 New Delhi: Nepal, which is reeling under Saturday's earthquake, is likely to experience widespread rains and thundershowers which may trigger landslides, according to the weather department which has asked people to remain alert.

"Weather Forecasting Centre of Indian Meteorological Department has predicted fairly widespread rain/ thundershower activity over Nepal during next the four hours. The activity is most likely to become widespread on April 27 and 28 with the possibility of isolated heavy thunderstorm activity, particularly over eastern part of Nepal," the Ministry of Earth Science said in a release.

Similar weather is also predicted for Kathmandu, it said adding it is suggested that precaution be taken against such weather and also due to possibility of landslides at vulnerable sites.

According to the release, the sub-Himalayan West Bengal and Sikkim would also experience fairly widespread to widespread rain, thundershower during the next three days with possibility of isolated heavy thunderstorm.

Scattered thunderstorm activity over Bihar and isolated placed in eastern UP would also occur during the next two-three days, it said.

It also said that another earthquake, that occurred at around 12.39 pm today, was of 6.8 magnitude at a depth of 10 kilometre with its epicentre about 65 km east of Kathmandu in Nepal.

Promoted
Listen to the latest songs, only on JioSaavn.com
Effects of this earthquake were also severely felt in all northern and central parts of India including in the capital city of New Delhi, the release said.

According to the Met Department, the Indian Tsunami Early Warning Center gave details of the epicentre and the magnitude of the quake within ten minutes of its occurrence.