At first, Ms Mcknight thought her symptoms were caused by stress, however, she later found that her fatigue, brain fog, dry skin and brittle hair were all signs of something more sinister. 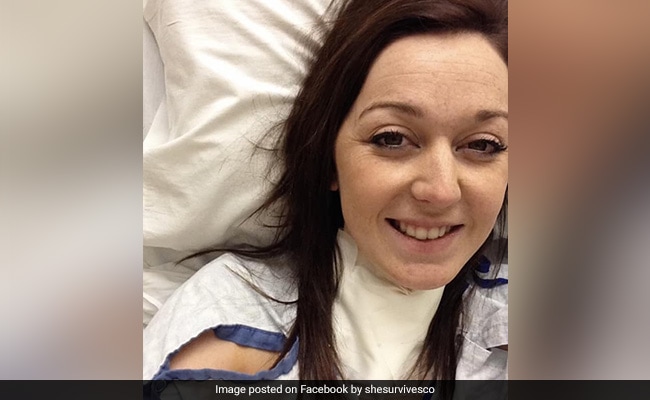 Ms McKnight was diagnosed with thyroid cancer despite having no family history.

From dry skin to brittle hair, a woman from the United States who battled thyroid cancer recently revealed the symptoms she ignored weeks before her diagnosis.

Christina McKnight was 27 years old when she was diagnosed with thyroid cancer in 2014, despite having no family history and being "young, fit and healthy". In a Facebook reel, she now revealed that she thought little of the signs for weeks and was only diagnosed after her husband, Mathew Mcknight, "forced" her to see a doctor.

"My husband literally had to MAKE me go to the doctor because I kept thinking it was just my promotion at work.. He could see I was struggling way more than what was normal with all of the symptoms," Ms Mcknight wrote in the caption of her post.

In the clip, Ms Mcknight said that she thought her symptoms were caused by stress after she landed a promotion at her job. However, her fatigue, brain fog, dry skin and brittle hair were all signs of something more sinister.

As per the Independent, she said, "It was one of those things that I never thought would happen to me. I was young, fit and healthy. I'd run a half marathon, did CrossFit for three years and had no known hereditary thyroid disease in the family at all."

"I just started to feel very tired and had loads of brain fog, but I thought it was just because of my promotion," she added.

Further, Ms Mcknight said that it was her husband who noticed how tired she was and her lack of interest in things. "I couldn't get stuff done like I used to. I would have to go to work on a Sunday to catch up because my brain was so foggy," she revealed. Ms Mcknight also started to notice her hair become "weirdly brittle", while her skin grew drier.

"Thankfully my doctor recognised my symptoms as he had recently diagnosed others with thyroid cancer. He felt my neck and found a lump which I wasn't even aware of and got the ball rolling with diagnosis," she said.

Following her doctor's concerns, Ms Mcknight then had an ultrasound and a biopsy which confirmed she had thyroid cancer. At first, she was hesitant to accept the diagnosis as her thyroid would have to be removed. But after getting a second opinion, she got a thyroidectomy in November 2014, followed by radioactive iodine ablation treatment in January to remove any remains of her thyroid glands.

A year later, she then got the all-clear. However, she has to have thyroid replacement injections to replace her lost hormones.

The thyroid is found in the neck. It produces vital hormones that regulate metabolism, energy levels, heart rate and body temperature.