He Withered Away For 7 Years. Doctors Didn't Realize His Passion Was Killing Him. 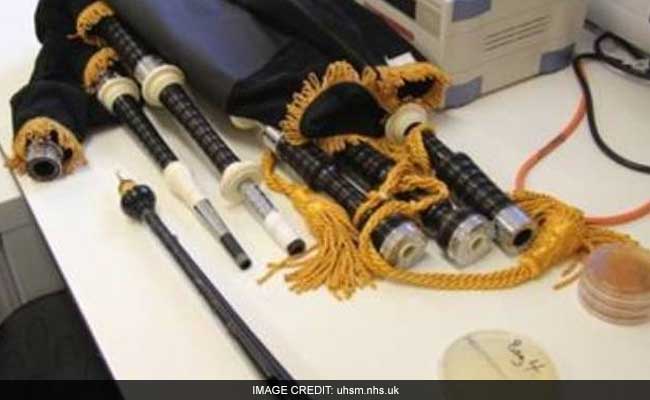 A team of five UHSM researchers coined a new term for the man's condition. "Bagpipe lung."

By the time the man arrived at the lung disease clinic in Manchester, England, it was almost too late.

It was April 2014 and the 61-year-old had spent the past seven years finding it harder and harder to breathe.

Once able to run 10 kilometers, he could now barely walk 20 meters.

His lungs were operating at a third their proper capacity.
Doctors were stumped.

Five years earlier, the man had been diagnosed with a serious inflammation of the lungs, known as hypersensitivity pneumonitis, or HP.

HP has a variety of other names, each one of which offered a possible solution to the medical mystery: farmer's lung, hot tub lung, humidifier lung and, perhaps oddest of all, pigeon fancier's lung.

When doctors tried to pin down the cause of the man's malady, however, it eluded them.

He didn't smoke. His home wasn't hiding any mold. He didn't have connective tissue disease, which can cause breathing problems.

And he did not fancy pigeons.

The only clue physicians at the University Hospital of South Manchester could see was that the man's symptoms had rapidly improved when he moved to Australia for three months, only for his breathing to deteriorate once again as soon as he returned to the United Kingdom.

In September 2014, five months after first arriving at the clinic, the man returned - in worse shape than ever.

He was breathing rapidly but suffering from hypoxia, or a lack of oxygen in his blood. When doctors listened to his lungs, they heard crackling like an old vinyl record.

An X-ray suggested pneumonia, a blood clot in the lungs or an exacerbation of the still mysterious HP. A CT scan ruled out a clot but showed that the lung scarring that had started seven years earlier had gotten worse.

Doctors gave him a cocktail of drugs to treat what they thought was bacterial pneumonia. When those didn't work, they added Posaconazole therapy, used to treat pneumonia caused by fungi.

An autopsy didn't explain much. It merely showed that his lungs were badly scarred, which was attributed to the years of inexplicable HP. The medical examiner chalked the cause of death up to "acute exacerbation of ILD," or interstitial lung disease, a broad category.

Now, however, nearly two years after the man's death, doctors say they have solved the medical mystery.

In a report published Monday in the medical journal Thorax, a team of five UHSM researchers coined a new term for the man's condition. "Bagpipe lung." 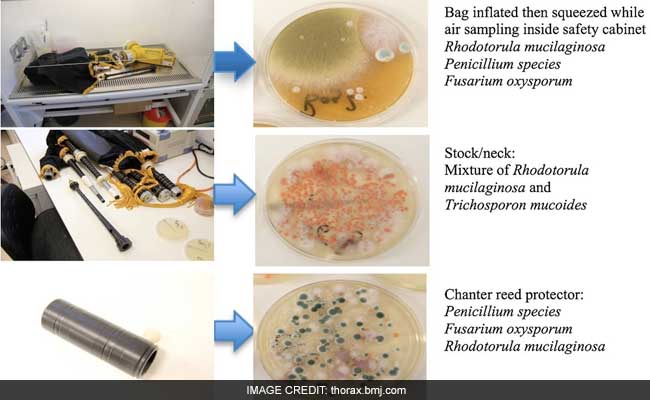 According to the paper, when doctors initially tried diagnosing the man's illness, they overlooked his daily hobby: playing the bagpipes.

Tests conducted on the man's bagpipes found a slew of fungi and yeast living inside the musical instrument.

Inside the air bag was a mixture of Paecilomyces variotti, Fusarium oxysporum, Rhodotorula mucilaginosa, and Penicillium species. In a petri dish, they formed a psychedelic swirl of green, orange and red mold.

There was pink yeast on the instrument's mouthpiece as well as fungi on the neck, chanter, chanter reed, chanter reed protector, bass drome and tenor drome, researchers found. Even the bagpipe carrying case had mold inside.

The moist, airtight bagpipes made an ideal home for the spores.

Unknown to the piper, who was not named in the study, every time he played his instrument, he was inhaling a mixture of mold that caused his illness.

His brief recovery in Australia had coincided with him leaving his bagpipes home in the U.K.

"It sounds like a Monty Python skit or an Agatha Christie story gone wrong," William Schaffner, a professor at the Vanderbilt University School of Medicine in Nashville, told USA Today.

This mystery, however, had been all too real.

"If that had been identified earlier, and he had stopped playing the bagpipes or cleaned them regularly, he may well have just gotten better," Jenny King, the study's lead author, told the newspaper.

The study noted similar illnesses befalling saxophone and trombone players, although they were fortunate enough for their instruments to be identified as the cause before it was too late.

According to the Guardian, however, it wasn't the first time that bagpipes have been identified as a health hazard.

In 2013, professional piper John Shone fell seriously ill with similar symptoms of breathlessness and weakness. Doctors discovered the fungus lurking inside his instrument just in time.
"It was very much life-threatening," Shone told the Guardian. "I was near death."

Part of the problem may stem from the use of modern materials in bagpipes, as old-fashioned leather pipes were often used along with a "seasoning" bag that had antiseptic properties, Shone said. Although airtight, leather bagpipes are also porous enough to let moisture escape, normally preventing mold growth, added Ian Clabburn, chairman of the Bagpipe Society, in an interview with the Telegraph.

The "bagpipe lung" case hold lessons for both doctors and musicians, according to the study

"This case highlights the importance of a careful clinical history including hobbies," researchers wrote. "Thorough clinical history exploring occupation, environmental triggers and pastimes is very important in cases of HP."