YouTuber Trained Pug To Do Nazi Salute For Video, Fined For Hate Crime

"I think it is a very dark day in regards to freedom of speech and freedom of expression," Mark Meechan said after he was fined. 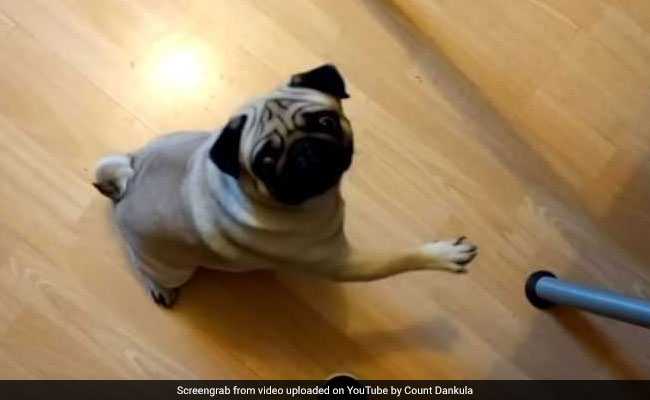 Mark Meechan has posted a video apologizing for any offense the video caused.

Mark Meechan stared at the camera and described the training he had given to his girlfriend's pug, Buddha.

"My girlfriend is always ranting and raving about how cute and adorable her wee dog is," he said in his Scottish brogue. "And so I thought I would turn him into the least cute thing I could think of, which is a Nazi."

Then Meechan asked the dog the same question, again and again: "Buddha, do you want to gas the Jews?"

For two years, the video, which includes a scene of a pug staring obediently at a speech by Adolf Hitler, has raised questions about the murky line between offensive satire and hate speech that normalizes Nazism.

The Nazi pug video has been blasted by outraged Jewish leaders and defended by satirists who likened Meechan's prosecution to censorship in the George Orwell novel "1984."

On Monday, according to the BBC, a sheriff gave him the fine and a stiff lecture, saying the video was anti-Semitic and racist. Meechan was found guilty of a hate crime under the Communications Act last month.

"The centerpiece of your video consists of you repeating the phrase 'Gas the Jews' over and over again as a command to a dog which then reacts," Sheriff Derek O'Carroll told Meechan while announcing the fine.

"You use the command Sieg Heil, having trained the dog to raise its paw in response and the video shows a clip of a Nuremberg rally and a flashing image of Hitler with strident music. You say the video was only intended as a joke to upset your girlfriend, whose dog you used, and nothing more."

O'Carroll told the court he did not believe that claim. Previously, the sheriff said, he believed the video was intended to draw attention to other material Meechan had on YouTube.

In the "M8 Yer Dugs A Nazi" video posted in April 2016 (which obviously contains offensive language), the dog becomes animated every time Meechan says the phrase or the word "Jews."

At one point, Meechan says "Sieg Heil," the Nazi salutation (in German, it means "hail victory"), and the dog extends its right paw, mimicking the Nazi salute.

The dog is also seen watching a Hitler rally during the 1936 Olympic Games in Berlin. The dog appears to raise its paw when Hitler proclaims "Sieg Heil."

"Who's a good wee Nazi?" Meechan praised the dog.

The video ricocheted around the Internet after it was posted in April 2016 and has now been viewed millions of times. Some found it amusing; others felt it was crude and anti-Semitic, including a woman who Meechan says confronted him, then spread dog feces on his front door.

Soon after the video was posted, police knocked on Meechan's door in Coatbridge, a town in North Lanarkshire, Scotland, he told Alex Jones. The officers told him that he was being charged with a hate crime and that the video could be seen as promoting violence against Jews. They told him to change his clothes, took pictures of his apartment and hauled him off to jail.

He spent a night there and was charged with violating the Communications Act of 2003, which prohibits using public telecommunications to send discriminatory religious messages.

Prosecutors in Meechan's September trial alleged that he communicated material that would cause fear and alarm and stir up hatred on religious grounds by posting a clip on YouTube that was "anti-Semitic in nature," according to the Telegraph.

"I feel in the long run I didn't do anything wrong," he said on Jones's show. "It was clearly satire. It was clearly a joke. I wasn't setting out to cause any offense to any people. If anything I was wanting people to laugh, and just obviously, it was taken the wrong way."

Meechan didn't respond to messages from The Washington Post seeking comment. He said that he could see how people could be offended by his video but that he doesn't "think hurting someone's feelings is a crime."

Ephraim Borowski, director of the Scottish Council of Jewish Communities, argued that the video is indeed a hate crime, according to the Telegraph.

"It is grossly offensive. It stuns me that anyone should think it is a joke," Borowski told the court, saying he had family that died in the Holocaust.

"My immediate reaction is that there is a clear distinction to be made between an offhand remark and the amount of effort that is required to train a dog like that. I actually feel sorry for the dog."

And Borowski told the court that there were real-world consequences: The council was "bombarded with" 160 pages of anti-Semitic messages supporting Meechan and the video.

In a Q&A with the Connecticut Jewish Ledger, Gavriel Rosenfeld warned that Hitler- and Nazi-based satire normalizes the Nazi legacy: "The Internet above all is the medium that really focuses on Hitler as a completely decontextualized, dehistoricized figure. We can draw a Hitler mustache on anything or a swastika on anything and start laughing at it.

"When Hitler himself is photoshopped into the form of various other characters, we get into some really bizarre phenomena: catsthatlooklikehitler.com or thingsthatlooklikehitler.com or 'Hipster Hitler' or 'Six Degrees of Hitler' - it's a cottage industry of people exploiting his image to get attention but we're far away from any historical lesson."

The Scotsman reported in July that there was a record number of anti-Semitic attacks in Scotland in 2016. The paper wrote that of the 26 anti-Semitic crimes last year, 15 resulted in criminal charges, while a further 19 "non-criminal" anti-Semitic incidents also took place.

Meechan has posted a video apologizing for any offense the video caused.

He stressed that he hates "racism in any way shape or form. . . . I don't have any ill will towards the Jewish community or anything like that at all."

But he'd already defended his actions in a succinct statement on his pug-centered video: "I'm not racist, by the way. I just really, really wanted to [tick my girlfriend] off."

Shortly after his conviction, Meechan said he would appeal the decision, which he said should make comedians in Britain "very, very worried about making jokes in the future," according to the BBC.

Promoted
Listen to the latest songs, only on JioSaavn.com
"I think it is a very dark day in regards to freedom of speech and freedom of expression."