He Thought A Book Would Stop A Bullet And Make Him A YouTube Star. Now He's Dead.

Ruiz held the book to his chest and Perez held the gun, a gold Desert Eagle .50 caliber pistol considered "one of the most powerful semiautomatic handguns in the world." 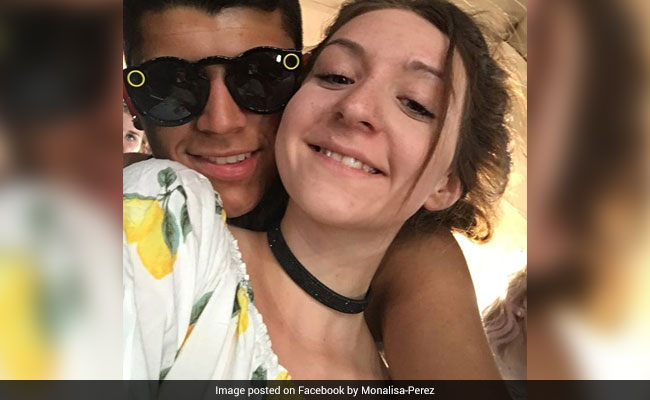 The young couple performed the stunt for YouTube fame.

Before Monday, before the 911 call and police investigation, Pedro Ruiz III, an aspiring YouTube star in rural Minnesota, spent considerable time convincing his girlfriend to shoot a gun at his chest.

There would be a thick encyclopedia book between the barrel and his body, authorities say he told 19-year-old Monalisa Perez. The pages, he reasoned, would stop the bullet.

He even had evidence that it had worked once before - a different book with an entrance hole but no exit.

So on Monday evening, the young couple positioned two cameras outside their home and prepared for their breakthrough stunt. They wanted fame, family said, and danger often brings it.

"Me and Pedro are probably going to shoot one of the most dangerous videos ever," Perez teased in a tweet at 5 p.m. "HIS idea not MINE."

It had been three months since the young couple added their vlog, La MonaLisa, to YouTube, where they posted clips of their daily lives and their 3-year-old daughter. They live in Halstad, Minn., a tiny town on the North Dakota border between Grand Forks and Fargo. Episodes featured shots from their home, the car or at the doctor's office, which is where Perez revealed in May that she was pregnant with a boy.

Their shtick, though, was pulling minor pranks: doughnuts with baby powder instead of powdered sugar, feigning paralysis from a grocery store wheelchair, hiding hot peppers on an egg salad sandwich. Just this week, Perez posted a video of Ruiz doing a handstand inside a rotating fun house tunnel at the county fair.

But the bullet and book stunt was supposed to be their breakthrough.

"I said, don't do it, don't do it," Ruiz's aunt, Claudia Ruiz, told her nephew when he shared his idea, according to Valley News Live. "Why are you going to use a gun? Why?"

His response, she said, was simple: "Because, we want more viewers."

With one camera attached to a ladder and the other propped on the back of a car, the couple staged their stunt, according to authorities. Ruiz held the book to his chest and Perez held the gun, a gold Desert Eagle .50 caliber pistol considered "one of the most powerful semiautomatic handguns in the world."

From a foot away, court documents say, Perez fired.

This time, the bullet didn't stop in the book but instead pierced Ruiz in the chest. Medics tried to revive him, authorities said, but he was declared dead at the house.

Neighbors told ABC affiliate WDAY-TV that they watched the scene unfold from afar.

"Everyone was crying," neighbor Wayne Cameron told the TV station. "I was standing behind that tree over there. And that was it. I just couldn't take it anymore so I had to go back home."

When Perez called 911 at 6:30 p.m., she told dispatchers the shooting was accidental and explained the YouTube plan. Later, according to court documents, she said that her boyfriend had been trying to convince her to shoot the book "for awhile" and she finally relented. She told them about the other book Ruiz had shot, the one that blocked the bullet, and described the gun she fired.

A sheriff's deputy found it in the grass outside the home.

Perez was arrested Monday on a charge of reckless discharge of a gun. On Wednesday, that charge was upgraded to second degree manslaughter. She was released on $7,000 bail after her initial court appearance and ordered to wear a GPS monitor and stay away from firearms, reported KVRR TV. In convicted, she faces up to 10 years behind bars.

Claudia Ruiz described Perez as a loving girlfriend and mother who had been with her nephew for six years. According to Perez's social media accounts, the young woman was a stay-at-home mom. It appears she controlled the camera for many of their YouTube vlogs and often shared intimate, personal details with viewers.

"Our Vlogs will show you the real life of a young couple who happen to be teen parents," the description on their channel reads. "From highs to lows. Achievements to struggles. Join the fun, Follow our journey!"

In a Facebook post last week that included the vlog post from their trip to the fair, Perez wrote that they were in the process of making Ruiz his own YouTube channel. His would focus on "all the crazy stuff," she wrote. La MonaLisa would be about their "family life."

Perez had discussed the book stunt before the shooting, family members told KVRR. Along with Perez and friends, they had tried to talk him out of it.

"I wish they wouldn't have done it," Claudia Ruiz told WDAY-TV. "I wish he would've just done another prank. He was so young. He had so much going for himself."

Another aunt, Lisa Primeau, said she "pretty much raised" Pedro Ruiz after his mother died in Texas when he was a child, reported the Minneapolis Star Tribune. Ruiz was always "putting a dangerous twist on everything he did," Primeau told the newspaper, like jumping off the top of the house into the swimming pool.

"We called him our little daredevil," Primeau told the Star Tribune.

The aunts said they all are supporting Perez. They want to name her unborn baby Pedro, after his father.

"It's a tragic incident. What she did . . . she has to live with that," Primeau told the Star Tribune. "It's the worst punishment she can get."